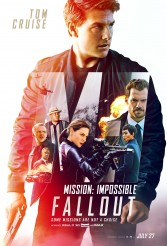 One of the better entries in the franchise 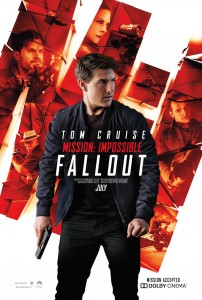 An outstanding first scene shows us that our superspy hero Ethan Hunt (Tom Cruise, back for his sixth go-round) is feeling understandable and deserved guilt about his marriage to Julia (Michelle Monaghan), a civilian who’s had to go into hiding because of her husband’s enemies.

Meanwhile, duty calls. In trying to take down the rest of the terrorist group they tangled with in ROGUE NATION, Ethan and his friends Luther Stickell (Ving Rhames) and Benji Dunn (Simon Pegg) try to get their hands on some plutonium to keep it away from the bad guys. This doesn’t quite work out. Erstwhile government nemesis Alan Hunley (Alec Baldwin) is now on Ethan’s side, but new CIA boss Erica Sloan (Angela Bassett) puts one of her agents, August Walker (Henry Cavill), on the team to ensure that the next operation is by the book. No guesses on how that works out. Old MI-6 frenemy Ilsa Faust (Rebecca Ferguson) returns, still pursuing her own agenda, and destructive anarchist Solomon Lane (Sean Harris) is also back as a human maguffin. An arms broker called the White Widow (Vanessa Kirby) is part of the new mix.

The action in MISSION: IMPOSSIBLE – FALLOUT bounces around the world, with major set pieces in France and India, the latter including that extraordinary helicopter sequence. There is a lot of fun to be had in watching the stunts and the staging, but this time around, there’s also a lot more pleasure in watching the characters acknowledge the absurdity of what they’re doing without breaking the fourth wall or the tone.

While still exuding the kind of determination that makes him a little scary, even Cruise gets a few lighter moments here. Rhames and Pegg are invaluable support, and Baldwin appears to be enjoying himself when Hunley is allowed into the mix. Ferguson once more seems hyper-capable.

Turning to the franchise newcomers, Cavill plays exasperation delightfully. Kirby is fascinating as the up-for-anything Widow. Bassett gives Sloan an attitude that suggests she’d prefer not to get into the muck, but if the agents mess up so badly that she must personally intervene, she will single-handedly knock all of them back into last week.

While MISSION: IMPOSSIBLE – FALLOUT is a direct sequel to ROGUE NATION, there are a few loose ends. With all the bonding and teamwork, it seems odd that there’s not even a mention of Jeremy Renner’s William Brandt, and with all the kerfuffle surrounding another character, it stretches credibility (even by MISSION: IMPOSSIBLE standards) that Ethan would be so totally out of the loop.

This said, MISSION: IMPOSSIBLE – FALLOUT is a superior specimen. It doesn’t transcend being part of its formula summer action franchise genre, but it’s certainly one of the better current examples of the breed.