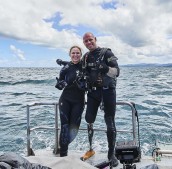 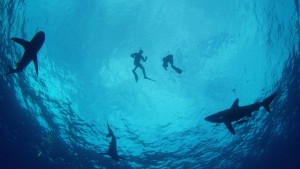 Paul De Gelder and James Glancy spend nearly 48 hours floating in the ocean, for virtually the whole time they had sharks circling in SHARKWRECKED | ©2018 Discovery Channel

Discovery Channel’s SHARK WEEK is back for its thirtieth anniversary, bringing with it seven days of aquatic apex predator fun and information, beginning Sunday July 22. One of SHARK WEEK’s favorite hosts, Paul de Gelder, is back for three of the event’s specials: RONDA ROUSEY UNCAGED, which features Olympic and UFC athlete Rousey training with de Gelder in order to be able to face sharks, airing Sunday, July 22; SHARKWRECKED, on Thursday, July 26, which follows de Gelder and James Glancy float for two days and nights with sharks in the open ocean; BLOODLINE: THE SPAWN OF JAWS, which investigates the return of Great White sharks to the northeast coast of the United States.

De Gelder is a passionate advocate for sharks and other wildlife. The Australian lost his right arm and leg to a shark in 2009. Intriguingly, this is what led to de Gelder’s love of the animals.

ASSIGNMENT X: So you weren’t especially fond of sharks before your injuries?

PAUL DE GELDER: Oh, yeah. I hated them before [laughs]. I thought we should wipe them out. But then, knowledge is power, and I got to learn about sharks, and their important role in the ecosystem, and then swim with them, and confront them, and see them in a very peaceful realm, being sharks, doing shark-y stuff, not as man-eating monsters. So my opinion was changed by learning all about them.

AX: So you started learning about them afterwards?

DE GELDER: Yeah, more so after the injury. I never really had much of an encounter with them before, luckily, because I spent a lot of time diving with the [Australian] Navy. So I didn’t want to run into them.

AX: So you were with the Australian military?

DE GELDER: Correct. Army Airborne for five years, and then a Navy bomb disposal diver, called a clearance diver, for five years after that. Then, after my injuries, I stayed in for another three years as an instructor.

AX: What is the title of your profession now?

DE GELDER: Now? I have no idea. I do everything [laughs]. I’m a SHARK WEEK host, a motivational speaker, and I finished my first acting role in FIGHTING SEASON, a six-part miniseries in Australia, about a group of returned Afghanistan veterans who’ve come back to Australia after their boss has been killed. Very confronting. On the second day ever of acting, I had to do a full nude MAGIC MIKE-style strip show. Give me Great White sharks without a cage any day over stripping.

AX: Do you have a favorite species of shark?

DE GELDER: I really don’t. I love them all for the different aspects of them. The Great Whites are so huge and powerful, the hammerheads look amazing, the whale sharks, they’re the biggest shark, but they’re the most peaceful – there’s something to love about all of them.

AX: You’re Australian. Is Australia a hub of shark activity?

DE GELDER: It is a huge hub of shark activity. Unfortunately, our government doesn’t like to do the right thing all the time. They [have been] considering actually culling Great White sharks again, which is ridiculous, because the reason they protected them was to get them back to healthy numbers, because they were becoming endangered. Now they’re at healthy numbers, it seems like they want to drive them back into being endangered again. So they’re a little backwards back there, unfortunately, on the other side of the planet. Luckily, in both countries [Australia and the U.S.], we have a lot of people putting up the good fight, trying to look after our planet when [other] people don’t. 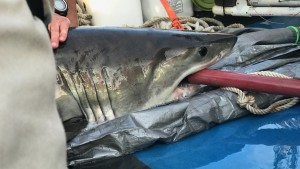 A baby great white shark in BLOODLINE: THE SPAWN OF JAWS | ©2018 Discovery Channel

AX: What would you say is the best method for advocating for shark conservation?

DE GELDER: I think all you need to do is get online, and use that wonderful thing we have called Google, find one or two conservation websites, sign up, find out what you can do to help them out, and they’ll do the rest. And don’t eat sharks. [De Gelder is a vegetarian.]

AX: Larger sharks like Great Whites can’t survive in aquariums, but for smaller sharks, do you think that having them in public aquariums helps promote conservation, or do you think that’s cruel to the sharks?

DE GELDER: I think it does [promote conservation]. I think there’s a better way to do it, though. I don’t think any animal should be confined to a small tank when it roams such large distances. A lot of places these days use conservation [in marine zoos], they use it to help sharks if they’ve been injured and other animals if they’ve been injured, but if they’re just catching them and chucking them in a tank for fun, I think that’s very out of order.

AX: Last year, you had a SHARK WEEK special called RETURN TO THE ISLE OF JAWS. Where exactly is the Isle of Jaws?

DE GELDER: The Isle of Jaws is a very remote, beautiful place, down off the southwest of Australia, where very few people have heard of, been to, or dived, and we went down [in 2017] for the second time, and swam with the large male Great White sharks without cages, and discovered that they could potentially be related to each other. They were swimming around peacefully together, no aggression – actually in formation, and it’s never been documented before. Hopefully, we’ll head back and take DNA samples and discover whether or not they have the same genetic code.

AX: Are they peaceful about letting you swim up and take a DNA sample, or …?

DE GELDER: We haven’t done it yet [laughs], so we’ll probably do that from the surface. I’m no scientist, I’ve never done that before, so I’m going to wait and find out. 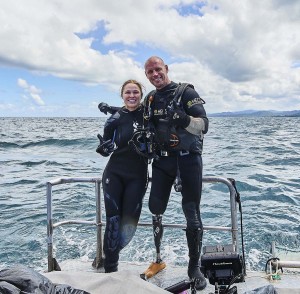 AX: It seems like, however peaceful they are, they might draw the line at having you stick a needle at them. And they are Great White sharks, so …

DE GELDER: No, I don’t like being stuck with a needle, either. [laughs] Unfortunately, we can’t swab their cheeks and tongue. But I think that would be a great way to do it. Maybe we’ll have to find a new way to do it, a peaceful way – take fin prints [laughs].

AX: And what would you most like people to know about SHARK WEEK?

This interview was conducted during Discovery Channel’s portion of the Television Critics Association (TCA) press tour.