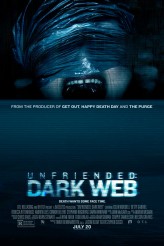 One plot twist too many, maybe 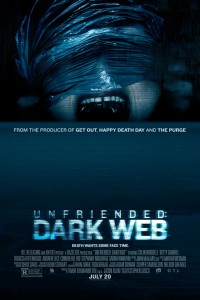 UNFRIENDED: DARK WEB shares with 2015’s UNFRIENDED the still fairly novel technique of having the entire movie play out over Facebook, Skype and video camera feeds. The two films also share the Blumhouse horror imprimatur. However, where the original UNFRIENDED was supernatural – literally, about a ghost in the machine – UNFRIENDED: DARK WEB concerns the possibilities of attracting the attention of some very unwholesome humans on the Internet.

At the beginning, we see that Matius (Colin Woodell) is trying to refine some voice-to-text translation software that will allow him to better communicate with his girlfriend Amaya, who is deaf (as is Stephanie Nogueras, who plays her). Amaya is losing patience with Matias, who seems to have more interest in his invention than in simply learning how to communicate with her in sign language. It’s Game Night for Matias’s friends. Conspiracy theorist A.J. (Connor Del Rio) would rather everyone came over to his place, but everybody else is settled in for the night and prefers to play online. The group also includes happy couple Serena (Rebecca Rittenhouse and Nari (Betty Gabriel), deejay Lexx (Savira Windyani), and long-distance Londoner Damon (Andrew Lees).

We learn more about the Matias/Amaya relationship, Serena’s fears for her ailing mother, and A.J.’s concerns about how social media is really a trap for the unwary (even though he uses it to virtually hang out). All of this means that by the time something starts happening, we’re grateful for the jolt.

This comes courtesy of Matius’s new laptop. He is not the original owner, and someone has left a whole bunch of extremely creepy videos on the hard drive. Then Matius unwisely reaches out to one of the people trying to contact the laptop’s previous owner at about the same time said owner furiously messages Matius, demanding the computer back. Because Matius is in the midst of communicating with his buddies, they soon realize something is up and weigh in on what he should do. And then it all starts hitting a little too close to home.

Director/writer Stephen Susco does a bang-up job with the format, setting up a storyline so unsettling that he makes us fear how much we’re going to see in some really brutal scenarios. He uses the power of suggestion to keep us on edge – UNFRIENDED: DARK WEB earns its R rating not through copious bloodshed (though it has its moments), but more via what it implies is either just out of frame or just about to happen (and of course the frequent use of certain words).

Susco gets fine performances from the actors – Betty Gabriel, so great in GET OUT, is especially good. There’s something poetically karmic about the whole crisis essentially occurring because of Matius’s entirely lifelike and exasperating refusal to do the real-time work of getting to know Amaya on her terms, and there’s decent story logic as to why the characters don’t simply shut down their devices.

However, there seems to be one plot twist too many. Or maybe there isn’t – UNFRIENDED: DARK WEB is being released with two different endings. Without seeing both versions, it’s impossible to know where the alternative “ending” begins and whether it affects the overall arc. (Apparently, it’s also hard to find out in advance which theatre is playing which climax.) Suffice to say that in at least one version of the movie, there’s a shift that raises so many questions that it’s enough to pull someone out of the story. Since UNFRIENDED: DARK WEB was working its disturbing wiles just fine without this turn of events, it feels like Susco takes a wrong turn here.

Otherwise, UNFRIENDED: DARK WEB works as non-supernatural horror that starts slow but becomes truly unnerving as it weaves its traps.