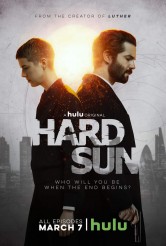 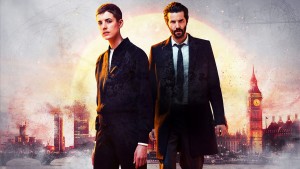 In the British series HARD SUN, now streaming its entire first season on Hulu, police detectives Charlie Hicks (Jim Sturgess) and Elaine Renko (Agyness Deyn) learn that the world will end in five years. Meanwhile, they’ve got to stop a serial killer with a weird philosophy.

Neil Cross created HARD SUN. He then brought it to fellow executive producer Kate Harwood (EASTENDERS, OLIVER TWIST, TESS OF THE D’URBERVILLES), who explains how HARD SUN came together.

ASSIGNMENT X: Did you develop HARD SUN with Neil Cross?

KATE HARWOOD: Yes. He brought me the idea when we started Euston Films up, and obviously, I was really excited about it. We developed it together, insofar as Neil comes very fully formed, but he loves a sounding board, he’s a very generous writer, so he loves to have someone to work with.

AX: What is your process like, working with Neil Cross? Does he just write everything, and then says, “Here are the pages,” or does he say, “Well, I have this idea,” and you talk about it first …?

HARWOOD: He lives in New Zealand. We are in London, so there are a lot of late-night chats. We talk a lot, and then what tends to come is, we do a little bit of story-lining. We story-lined in L.A. for a little bit, because that’s sort of in the middle of London and New Zealand. But in the end, he delivers an episode. I know roughly what’s in it, but he’ll deliver the episode fairly fully formed, and then we work on it together.

AX: Were there any particular things you wanted?

HARWOOD: No. I see my role with Neil, who has such a developed imagination, as being a sounding board. I didn’t have to fight for anything. No, I don’t think that’s true. I made one suggestion that I think that we delayed revealing something, and that Neil took up. He’s very easy to work with, and he loves suggestions and comments.

AX: Renko and Hicks are both British. Was Renko at any point in the proceedings meant to be Russian?

HARWOOD: No. You were thinking of GORKY PARK. No, that’s the name that Neil wanted to give her. She was never Russian.

AX: Does this pre-apocalypse London look exactly like today?

HARWOOD: Yes. We have a lot of sunsets. No, the whole point of the pre-apocalypse, it’s a sort of slight tease, because of course, presumably at some point, we’ll all be pre-apocalypse and we won’t know it, but it’s the idea is, it’s London as it is today and now, and it doesn’t look any different.

AX: How did you arrive at casting Jim Sturgess and Agyness Deyn as your leads?

HARWOOD: Luck. Absolute luck. It was the magic of casting, and as soon as we met both of them, they felt the right people for the show.

AX: Were you instrumental at all in HARD SUN landing at Hulu?

HARWOOD: Neil and I came up here [to Los Angeles] and met some other distributors, and we engaged with Jessica [Scott] and Jordan [Helman] from Hulu so quickly. They have been the best co-producers you could possibly wish for, they really have. They’ve been so supportive, so responsive, very, very clear about what they wanted from the show, but very respectful as well. They’ve been great.

AX: Do you like or dislike the idea that people can, if they wish, wait for all the episodes of HARD SUN to have accumulated on Hulu and binge it?

HARWOOD: I love that. I think this show will reward bingeing. It seems to [have happened] like that in the U.K., and I think that’s great for the show.

AX: Do you guys have any other projects we should know about?

HARWOOD: Yes. Euston Films has THE DUBLIN MURDERS, an adaptation of the Tana French novels, is the next thing we’re going to shoot, adapted by Sarah Phelps.

AX: And what would you most like people to know about HARD SUN?

HARWOOD: I’d like them to know that it’s an entertainment. It raises big questions and big characters, but it should be fun. It should be a fun, thrilling ride.