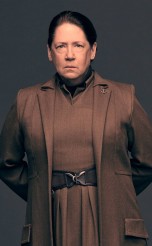 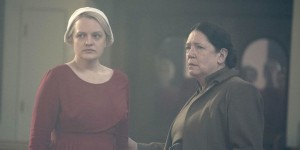 In Hulu’s multi-Emmy-winning THE HANDMAID’S TALE, based on Margaret Atwood’s novel, most of America has been taken over by Gilead. Gilead is a far-right religious sect which dictates that the few remaining fertile women be forced to procreate for powerful men and their presumed-sterile wives (when couples can’t conceive, it is always deemed to be the woman’s fault). The fertile women, known as handmaids, are forcibly taught what is expected of them by women known as aunts. Aunt Lydia is an especially formidable example, played by Ann Dowd, who won an Emmy for her performance in THE HANDMAID’S TALE’s first season and is nominated for another Emmy for second season. (Both seasons are now available in their entirety for streaming on Hulu.)

Dowd was also Emmy-nominated for her work as the determinedly contrarian Patti Levin in HBO’s THE LEFTOVERS, which ran for three seasons. The Massachusetts native was seen earlier this year in the horror film HEREDITARY. Other recent work includes the features A KID LIKE JAKE, NANCY, and AMERICAN ANIMALS, and FBI Agent Rhonda Lashever in the TV series GOOD BEHAVIOR.

ASSIGNMENT X: Do you see any similarities between Aunt Lydia in THE HANDMAID’S TALE and the Guilty Remnant leader Patti Levin in THE LEFTOVERS?

ANN DOWD: Well, they are both forces to be reckoned with, for sure. I think they’re both aware that, unless you take things into your own hands, nothing is going to change. And I think they could both be perceived as angry and terrifying, but I think there’s a heart in there that they both possess, that moves me, anyway, in the playing of them.

AX: Aunt Lydia obviously feels that she is protecting the young women, even when she is harming them. Do you think she feels that Gilead is the right way to go, or is she making the best of a situation?

DOWD: I think she feels it’s the only way to go. I think she feels very strong religious beliefs, and that the behavior that led to the falling apart of this world was despicable behavior, that values are to be cherished, and not discarded. I think she’s all in there. Does that make sense?

AX: Yes. Damon Lindelof, the executive producer and adapter of HBO’s THE LEFTOVERS, said you, Ann Dowd, are the solution to all problems. Do you see that as part of your job as an actor, or is that how you are perceived by your coworkers?

DOWD: Damon Lindelof is so fabulous. What a generous and beautiful thing to say.

AX: Do you feel that’s sort of your job as a performer, or at least, that that they’re giving you a puzzle, and your job is to solve the puzzle, or …?

DOWD: Well, solving the puzzle requires the input, for me, at least, of the writers. I have a mind that stops, meaning, [there were a] number of times I emailed Damon Lindelof, because he works with such complexity, and when you’re first reading the thing, you think, “How am I going to unravel this?” But then you settle down, and you realize, “Okay, these are the questions I need to have answered so this makes sense.” And he is always there, always was there to answer, very clearly, very specifically. If you want the answer, he will tell you. If you don’t want the information, he doesn’t burden you with it. [THE HANDMAID’S TALE adapter/executive producer] Bruce [Miller], in this case, is very available also. Because there are certain questions, like, what was Lydia doing before? He said, “I think she was a teacher.” Oh, my God, the light bulb went off. Thank you, that’s brilliant. They were used to teaching, dealing with young people in large groups, getting them to focus and pay attention. But it is a puzzle, you’re absolutely right. The joy of a series is that you have time, and you learn to know them over time.

AX: When you’re on set with a large group of people who are playing handmaids, how do you work with all of them?

DOWD: Some of these wonderful extras have such a hard job. It’s so important to these young handmaids that are not principal actors, the hours, and it’s so necessary that they fit into this world. But they don’t know the whole world, because they haven’t seen the script, really, even. So I feel as Lydia, part of my job is making sure they get it. In the classroom [scene] where Lizzie [Elisabeth Moss, who won an Emmy last year and is nominated this year for her performance as handmaid June/Offred] comes in for the first time, [Lydia is] teaching them. As we were doing the takes, and in between, I realized, some of these girls don’t realize, “Don’t look away from me when I’m talking to you. In this world, that’s never going to work.” So I would just scare the daylights out of them. I would take the cattle prod and just whack the desk, or call them out. But of course, letting them know, “This is not personal, this is just a requirement, girls. In this world, you can’t do that, and don’t you dare slouch and look elsewhere.” Because she’s never going to tolerate that.

AX: Do you talk to them between takes, or do you do that during the take?

DOWD: During the take, and leaving room so that the editors can cut out things that are not intended in the script. But it’s been wonderful in those circumstances. And also to look after them. These are long, hard hours, as you know from your work. They’re just long hours on a set. And when we shot the challenging scene, in which that man – I think it’s in the first episode –

AX: Where the handmaids as a group kick an accused rapist to death?

DOWD: Yes, exactly. That was a hot summer day, and we let these actors know, darlings, this is not the time to be brave, if you’re not well. That’s a very caring set. But that’s what I see in Lydia, letting them know, she’s not just a monster, she cares about their success in this world.

AX: She wants them to survive, because she thinks that’s how the human species will continue …

DOWD: That’s it. If we’re going to accomplish this goal, which is the salvation of humanity, this is how it’s got to go.

AX: Reed Morano won an Emmy for her direction in the first season of THE HANDMAID’s TALE. She did three episodes total. How was it working with her?

DOWD: Beyond. Off the charts. Her eye is extraordinary. Her ability to visualize how she wants the story told, and also to come right to you and say, “How about this idea?” I love her. Very specific, full of energy, always committed. I can’t say enough. She is sensational.

AX: Have you gotten to meet author Margaret Atwood?

DOWD: We met her, because she was in a scene. She came to set and played one of the aunts. She has the straightest posture, sharp as a tack, lovely, revered, a treasure of Canada. She was treated as such, very naturally, by everyone in the room. It was a beautiful thing. It was slightly nerve-wracking. Here she is. Lydia is running this particular scene, so it was very important to hopefully get it right.

DOWD: It’s unlike anything I’ve ever experienced. And I say that without the slightest hyperbole. Filming it, I’m looking around and saying, “I have never experienced anything like this.” That’s what I would say.