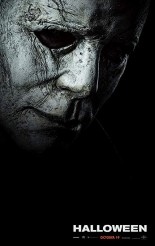 A slasher sequel astonishingly in tune with the zeitgeist 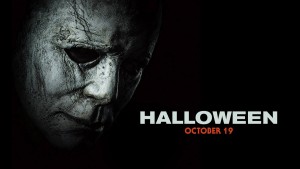 A middle-aged woman speaks up about a man who committed violence against her decades ago, because she thinks the public may be endangered. It’s not so much that the people in power don’t believe her, it’s that they think her concerns are irrelevant.

No, this isn’t a story about current events, but rather the backbone of the new HALLOWEEN. The filmmakers obviously had no way of knowing exactly how timely their movie would be at the date of its release. However, it will certainly provide a measure of catharsis to a section of the audience, including some who may not be customary horror viewers.

The new HALLOWEEN is a direct sequel to the 1978 original. The script quickly makes clear that we should ignore all the other HALLOWEEN follow-ups and remakes as “rumors.” Onscreen as in the real world, forty years have passed. And this is one of the things that makes the new HALLOWEEN so interesting and satisfying.

Most slasher movies have characters who either have no idea what to do when faced with a psychotic, hard-to-stop killer, or else all of their wisdom is gleaned from watching horror movies. In this HALLOWEEN, Jamie Lee Curtis is back as Laurie Strode, still traumatized from her previous encounter with masked Michael Myers (James Jude Courtney for most of this film, Nick Castle – the original 1978 Michael Myers – for one scene) forty years earlier, when he murdered several of her friends and did his best to kill her. With the help of the late Dr. Loomis (the late Donald Pleasence, heard in an audio recording here), Laurie escaped. Michael was subsequently caught and has been locked in a mental institution for four decades, but that hasn’t stopped Laurie from imagining that he might somehow get out. To understate the case, Laurie is prepared for that possibility.

Laurie’s now-grown daughter Karen (Judy Greer) thinks that Laurie has ruined her own life, and almost ruined Karen’s, with her PTSD. Karen’s husband Ray (Toby Huss) is loyal to his wife’s point of view, but their high school honors student daughter Allyson (Andi Matichak) has sympathy for her grandmother. And then, the night before Halloween, Michael Myers escapes.

There is plenty of Michael stalking and killing people before HALLOWEEN gets around to the inevitable confrontation. Director David Gordon Green approaches all of this with a mixture of suspense and humor. The jokes are never at the expense of the victims; death is a serious business here. Still, we are primed for what will happen when Michael and Laurie finally confront one another – it’s hard not to be, since several other characters are obsessed with this.

Green and his fellow screenwriters Jeff Fradley & Danny McBride, work in a number of homages to John Carpenter’s original HALLOWEEN without ever winking at the audience. They allow us to easily like Laurie’s family, while still having immense sympathy for Laurie herself. Curtis gives a performance that is committed as it gets, unafraid to be distraught and broken at moments, but yet finding a spine of steel – and charming warmth in a friendly one on one scene with her granddaughter. Matichak is wholly persuasive, Greer and Huss are a lot of fun as a double act, and Haluk Bilginer is intriguing as Dr. Sartain, who took over the Myers case after Loomis passed away. Actor Courtney and the storyline give us a sense of Michael Myers as a conscious predator, ever observant, a force that ties events together.

The score by Cody Carpenter, John Carpenter, and Daniel A. Davies uses suggestions from the original, while still having its own brooding, pulsing identity.

There’s a key moment in the new HALLOWEEN that pays tribute to the first film. To put it in the least spoiler-ish terms possible, something that we might expect to see in a specific shot is not there. The press screening audience cheered. And although this is not the climax, that’s the point at which you feel a sense of triumph, for the film, for its makers, and (if you’re viewing this HALLOWEEN from a certain perspective) maybe for a few other things as well.