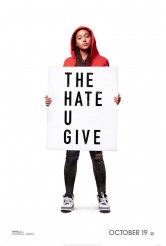 ©2018 20th Century Fox
THE HATE YOU GIVE movie poster
Reviews

Movie Review: THE HATE U GIVE

A stunning adaptation of the novel 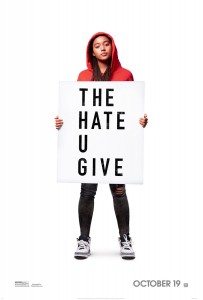 The title of THE HATE U GIVE is taken from Tupac Shakur’s “T.H.U.G.L.I.F.E. (The Hate U Give Little Infants F***s Everybody).” This translates to the late Shakur’s philosophy that racism aimed at children ruins not only their lives, but the lives of everyone in the vicinity. Based on Angela Thomas’s best-selling YA novel, THE HATE U GIVE elaborates on this concept and much more.

THE HATE U GIVE explores a multitude of issues lucidly and with clarity, from blaming the victim, to how trying to see all sides can register as an attack, to how things that might be a big deal to some people are just the matter-of-fact past we all carry for others. Director George Tillman Jr. and screenwriter Audrey Wells, in adapting Thomas’s novel for the screen, create an immersive world where troubling, empathy-inducing events play out, making us all ask what we’d do if we were any one of the characters.

Our hero and narrator, sixteen-year-old Starr Carter (Amandla Stenberg) starts THE HATE U GIVE by remembering the first time her father Maverick (Russell Hornsby) gave Starr and older half-brother Seven (Lamar Johnson) The Talk. This is the instruction that many black parents give to their children about what to do if they’re ever pulled over by the police, which can be a matter of life or death even if absolutely no wrongdoing has occurred. Maverick makes sure his children take The Talk very much to heart.

The Carter family lives in the mostly black community of Garden Heights, but after a childhood tragedy, Starr’s forceful mother Lisa (Regina Hall) has long ago decreed that Starr and brother Seven attend prep school in a neighboring, mostly white community. Starr feels she is two different people, the open young woman she is at home and the quieter person she is at school, determined not to say or do anything that might seem “ghetto,” even with people who claim to be colorblind, like her white boyfriend Chris (K.J. Apa) and white best friend Hailey (Sabrina Carpenter).

Life in the Carter household is pretty happy. Mom and Dad adore each other and their kids, Starr gets along just fine with Seven and their little brother Sekani (TJ Wright), and Maverick keeps everyone financially comfortable by running the local small grocery/liquor store. Sure, Lisa keeps on top of the two teens about their grades, Chris keeps asking Starr when he’s going to meet her family, and there’s a little bit of weirdness with Seven’s unpredictable birth mother Iesha (Karen Kendrick) and with Maverick’s old associate King (Anthony Mackie), but mostly, all is well.

Then Starr attends a neighborhood party, where she runs into childhood best friend/old crush Khalil (Algee Smith). A fight breaks out between strangers, and Khalil offers Starr a ride home. They pull over and talk. Then Khalil starts the car up again, and is promptly pulled over by a young, scared, arguably deeply ignorant and definitely while police officer. Starr does what she’s been taught to do, keeping her hands in sight at all times. Khalil is understandably angry and begins to argue with the cop, which upsets the cop further. So does Starr’s brief attempt to film the situation. When Khalil reaches into the car, looking for his requested identification, he picks up his hairbrush – and the cop fatally shoots him.

The rest of THE HATE U GIVE deals with Starr wrestling with whether or not to testify before the grand jury on what she witnessed, and the effect on her family and friends. While THE HATE U GIVE is very much about the racial divide (and to a lesser extent, the class divide) in America, it may be hard for many viewers to ignore timely parallels with what’s in the news right now regarding Dr. Christine Blasey Ford speaking up publicly about Brett Kavanaugh.

If anything, this only makes THE HATE U GIVE’s points more powerful. Because Starr is an adolescent working out what is right, what is wrong, and why, her dialogue sounds natural rather than didactic, even though points are certainly being made. The reactions of almost everyone around her also feel credible (boyfriend Chris seems a little too solid, beyond one wince-inducing cliché), and the neighborhood issues are also plausible, though they sometimes threaten to pack maybe more dramatic wallop than one story can bear. Perhaps to keep the running time manageable, the film also doesn’t take on topics like national social media and the further chaos that would likely arise from that.

Stenberg gives an incandescent performance as Starr, always putting nuance into her reactions, whether she’s silent, speaking, or screaming. The actor makes us immediately and entirely identify with her character. The rest of the cast is likewise powerful, with especially strong work from Hall and Hornsby as Starr’s concerned, conflicted parents, Common as a family member who is also a police officer, and Mackie understated as King.

THE HATE U GIVE has a lot on its mind, and it makes its case very well. More, it makes its statements seem like questions, and its observations are wrapped in potent, absorbing storytelling.