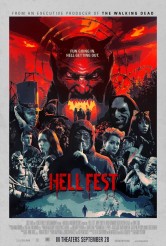 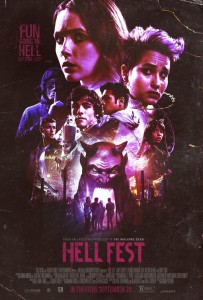 HELL FEST belongs to a growing subset of horror movies set in and around Halloween festivals and mazes. (Case in point: HELL FEST should not be confused with the similarly-titled and set but differently plotted BLOOD FEST, released earlier this month.) Its production design, by Michael Perry, is so inventive and entertaining that a lot of viewers will wish they had the opportunity to visit a real-world Hell Fest, or at least get better and longer looks at the plentiful characters and set pieces that pop out with great frequency.

The feel of HELL FEST is cheerfully retro. Yes, the college student characters are a little wiser to the ways of horror, but this isn’t self-referential, a la SCREAM. With its masked killer and slightly random plotting, HELL FEST harks back to the kind of slasher movies of the ‘70s and ‘80s, when it was more important to fight back against the killer than to figure out what made him tick. 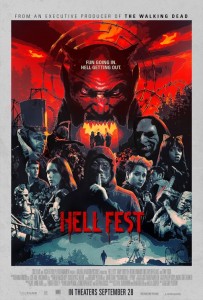 In a prologue, we see a masked figure referred to in the credits as the Other stalk and kill a young woman in a horror maze. A few years later, Natalie (Amy Forsyth) comes to spend a weekend with her erstwhile best friend Brooke (Reign Edwards). Natalie discovers in short order that Brooke is now roommates with Taylor (Bex Taylor-Klaus), an old acquaintance Natalie dislikes, and that Natalie is expected to accompany both women, their respective boyfriends (Christian James and Matt Mercutio) and Natalie’s crush Gavin (Roby Attal) to the Hell Fest horror theme park.

We see the Other from the back, entering the Hell Fest park as an attendee, then donning his mask and pulling up his hood. This tells us that he can pass as a normal guy. He takes note of Natalie. Natalie notices she’s being watched by a guy in a hoodie and a mask, but, given the number of costumed park workers, this at first doesn’t seem suspicious. Then the Other and Natalie encounter one another again in a promising scene where the audience and the main character have very different ideas about what’s happening. 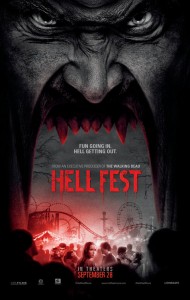 Surprisingly, this doesn’t resonate later on. By itself, this is a little disappointing, but not fatal. The failure to follow up, though, is indicative of why HELL FEST isn’t better. There are some clever reversals of expectation, but they never quite add up in a way that shapes the narrative. The characters are likable, especially Taylor-Klaus’s exuberant horror fan, but none have much back story.

The Other is also strangely inconsistent, stalking and killing individual young women who are part of larger groups at the outset, but then targeting all of Natalie’s friends for no evident reason. After setting up some elaborate kills and going to great lengths for privacy, the Other also engages in some public violence that would seem to be self-defeating, as well as confusingly staged. After setting up the notion that we’re going to be teased throughout by not knowing which threats are make-believe and which are real, HELL FEST tips its hand on this score too often. The set-up leads us to anticipate more cause and effect than we actually get.

Even so, there’s something refreshing about a horror movie where the characters aren’t too jaded and when there’s real creativity put into sets and costumes. It’s also fun to see something that evokes an earlier era in the horror genre, and the R-rated gusto is a definite plus – nobody is going to confuse this with an anemic PG-13 offering. All of this gives HELL FEST a welcome midnight movie vibe.