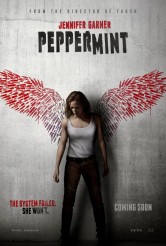 Too absurd to be as serious as it is

PEPPERMINT knows what kind of movie it wants to be, it just has trouble achieving it. The first hint of this problem can be seen in the title. If PEPPERMINT isn’t the single worst title for a would-be gritty action revenge drama, it’s got to be high in the running.

PEPPERMINT has a premise that has powered many films before it: perfectly nice person loses family to a mob hit and reinvents self as a steely avenger. The twist in this case is that instead of Charles Bronson or Liam Neeson, the perfectly nice person is played by Jennifer Garner. The pleasingly unexpected twist within the twist is that there is no sexual violence, nor even harassment. There’s plenty of violence and bloodshed, but nary a whisper of rape, and this as much as anything will make a lot of prospective viewers want to give PEPPERMINT a chance.

On the flip side, we’ve got a suburban white woman wiping out a bunch of evil (and largely incompetent) Latino men. Even though there are a couple of Latinx people on the side of the angels, and a couple of white baddies in the mix, the conflation of L.A. Latin culture (even piñatas – come on!) with amorality is pretty icky. So is our hero’s snap decision that everyone, including judge and prosecutors, involved in the courtroom acquittal of three killers is corrupt and worthy of execution. Um, really?

When we meet Garner’s Riley North, she’s in the process of shooting a man to death, then lugging his body out of a car. Then she retreats to the back of a van parked on Skid Row in Los Angeles to patch herself up.

Chris and Carly are killed; Riley is shot in the head, but lives. A bench trial of the three gunmen Riley identifies results in no conviction (see above). Five years later, after learning all sorts of useful and lethal skills abroad, Riley returns to Los Angeles, determined to take out everyone responsible for what happened. It’s a long list. Meanwhile, the LAPD and the FBI try to figure out where this vigilante might strike next.

All political considerations aside, there are too many absurdities in PEPPERMINT for us to take it seriously, but no actual sense of humor to put those elements in a serviceable context. The glimpses we get of Riley’s overseas education in combat are unintentionally hilarious; the ease with which Riley keeps infiltrating the drug operation is hard to buy; her savior status on Skid Row is so bluntly stated as to be cartoonish.

Furthermore, despite Garner’s best efforts, there are contradictions in Riley that don’t give her depth, but rather just don’t add up. She’s an unstoppable lethal force, but she cries herself to sleep; she’s ready to die, but seems afraid and vulnerable during her hair’s-breadth escapes. The filmmakers seem to be going for complexity, but because of the lack of nuance everywhere else, they wind up with something that feels a little like that “Leading Lady” short making the rounds right now. (If you haven’t seen it, it’s a send-up of the impossible demands set on female leads.)

Director Pierre Morel, who also helmed TAKEN, can choreograph action, though there is nothing exceptional here. Writer Chad St. John comes up with one good plot surprise, but otherwise moves between the expected and the very unlikely, sometimes encompassing both.

If you want to see a female-driven actioner in which the lead’s gender doesn’t result in a lot of threats of sexual violence, PEPPERMINT fills the bill. If you want to see a thriller with much of anything else going for it in terms of narrative or visual flair (or social awareness), this is less fulfilling.