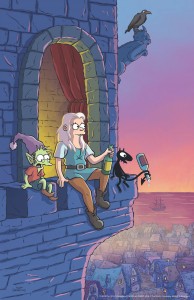 In Netflix’s new animated series DISENCHANTMENT, tough Princess Bean (voiced by Abbi Jacobson) goes on a quest with optimistic elf Elfo (voiced by Nat Faxon) and personal demon Luci (voiced by Eric Andre). This may sound a little like either a Disney feature or a Saturday-morning show, but DISENCHANTED is created by Matt Groening, who brought forth THE SIMPSONS and FUTURAMA, and Josh Weinstein, who has been a writer and producer on the two Groening series.

Asked about the family viewing prospects for DINSENCHANTMENT, Weinstein replies, “We’re hoping that the jokes for adults will go over kids’ heads, even though we’re saying this is an adult cartoon.”

At a Q&A panel for DISENCHANTMENT alongside Groening, Jacobson, and Andre, Weinstein fields more inquiries about the new series. After this, he takes time for a one-on-one with ASSIGNMENT X.

Regarding Netflix’s flexibility in episode length compared to broadcast television, Weinstein says, “I think we were mostly really happy because, on THE SIMPSONS and FUTURAMA, we were constantly having to cut moments or jokes or scenes to get down to twenty-one minutes. Now we have complete freedom, it’s only budgetary constraints of how much animation we can do. So now we’re allowed to tell the stories for the amount of time that a story takes. So that’s kind of awesome. So it varies from a thirty-five-minute pilot down to twenty-five minutes and thirty seconds, and anywhere in between So it gives us huge storytelling freedom. But also, for example, if we want to have the characters walk through the Enchanted Forest for five seconds and just have a beautiful shot, we can do that, whereas on THE SIMPSONS or FUTURAMA, we’d have to cut it.

Weinstein feels that the relatively youthful actors of the DISENCHANTED cast have their own take on comedy. “It’s like there’s a generational line of comedy, because in college, I idolized Matt for LIFE IN HELL, and then [the DISENCHANTED voice cast] grew up watching THE SIMPSONS. My theory – I grew up watching SCOOBY-DOO, which is not the world’s best show, but I loved it. But they grew up watching THE SIMPSONS. So their comedy – they’ve evolved past us. They’re actually funnier than we are, and they’re also not afraid to embrace emotion. So every time we do a take of a scene, we’ll record it twice as written, but then we’ll just say, “Go make it your own.” So a lot of the funniest stuff has actually come from them ad-libbing, and the actors playing against each other. So we really do allow [the cast] to go bats*** crazy.”

Groening says that DISENCHANTMENT tries to reflect a strong feminist component. Weinstein elaborates, “That’s why we have female writers [on staff] as well. Because we’d like to think we’re sensitive guys, but we have an awesome writing staff. It’s also some old SIMPSONS and FUTURAMA farts, and also people under thirty as well. It’s like fifty-fifty. So we have writers from GRAVITY FALLS, and from all different areas of comedy, which is really, just like the cast, a great mix.”

JOSH WEINSTEIN: It’s more the former. We can do anything we want. Netflix allows us, but what we can on DISENCHANTMENT that we couldn’t do on FUTURAMA or SIMPSONS is tell these serialized stories, and have deep characters arcs. Because of the nature of Netflix, we’re giving everyone a whole season at once, so it’s really more like an epic movie with an arc. So that’s very different. Now we could have on this show, because it’s Netflix, used bad language and been dirtier, but it didn’t feel right. 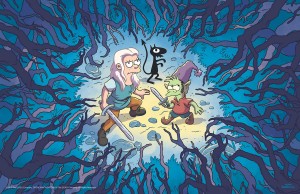 AX: So you’re not going full Ralph Bakshi with this …

WEINSTEIN: Yeah. There are some adult things, but like I said, hopefully that will go over kids’ heads.

AX: With Luci and Elfo, Luci is obviously a spawn of evil, and Elfo is … are elves the epitome of good in DISENCHANTMENT?

WEINSTEIN: In our universe, elves are happy all the time, but Elfo grew up that way and is sick of it.  I think you could say that elves are good, and demons are bad, wanting to push people to the dark side.

AX: Through the course of the story, do both of those characters move more towards the middle, or do they become more extreme in what they are?

WEINSTEIN: I think they all kind of change. You see layers – it’s corny, it’s like an onion, but you start to unfurl – like Luci’s secret – everybody has secrets. I won’t say his secret is, but you start to see more humanity under both of them. So in fact, you see Luci become more good, and Elfo learns how to be bad. It’s not totally that, but that’s kind of the crux.

AX: Are there any other major or continuing characters whose adventures we’re following?

WEINSTEIN: We follow the trio throughout the whole series, but the main ones also have secrets, and we learn those. For example, King Zog has a secret that’s not revealed until the end of the first season. So those characters grow and progress, and other characters, like Prince Merkimer, who’s played by Matt Berry, his character gets turned into a pig, and he wants to get turned back, and so we follow his story arc as well.

AX: The backgrounds in DISENCHANTMENT look a lot denser and more elaborate than what you’ve done before, or indeed, than is usual in TV animation …

WEINSTEIN: Yes. That’s really intentional. We wanted the backgrounds to look like a beautiful storybook, kind of like classic Disney or Fleischer Brothers cartoons, so we really pushed the animation company, Rough Draft, to blow people away. So it’s a lot lusher than I think THE SIMPSONS and FUTURAMA, however cool they are, they’re flatter worlds.

AX: The characters still look very much like Matt Groening designs. Are there any characters that are a different design?

WEINSTEIN: No, but they’re from different eras of Matt Groening. So I think, for example, there are these little cape-bearers, called Vip and Vap, you’ll see they carry King Zog’s cape, and those are kind of like LIFE IN HELL Akbar and Jeffy. I think Luci, that character, seems like from an earlier Matt Groening era. They’re all his style, and he designed all the main ones.

AX: Do you do any of the design yourself?

WEINSTEIN: I will help with design, like I’ll say, “Oh, they should be taller,” or whatever. We’d talk about the characters. Matt would go up to his office and draw, and say, “What about this?”

AX: Do you know how many seasons you want to do DISENCHANTMENT?

WEINSTEIN: I don’t. We know the end. We know how we want the series to end. Obviously, everybody would be like, “I’d like to have ten years,” but I don’t know. I don’t want to be greedy. We could tell the story in five seasons, we could it in seven seasons. It just depends how long, but we want do want to have an ending, so I’d like something like LOST or whatever. It will be really satisfying, and we know what that ending will be.

AX: And what would you most like people to know about DISENCHANTMENT?