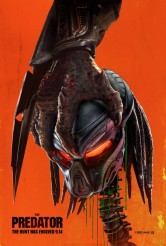 A dirty half-dozen, aliens and lots of weapons 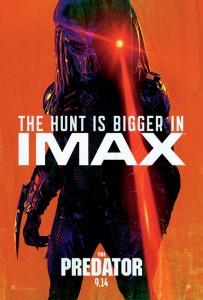 The new movie THE PREDATOR is a follow-up to 1987’s PREDATOR and 1990’s PREDATOR 2. It’s unclear if 2004’s AVP: ALIEN VS. PREDATOR and/or 2007’s ALIENS VS. PREDATOR: REQUIEM are part of the new movie’s timeline or not, and of course nobody on Earth would likely know about the events of 2010’s PREDATORS (which took place on another planet).

However, given the similarity of titles, viewers can be forgiven for wondering if they’ve seen THE PREDATOR before. This question will not necessarily be answered by watching the new movie, which in its broad strokes resembles a whole bunch of other films. The good news is, under Shane Black’s direction of the script he wrote with Fred Dekker, THE PREDATOR races along pretty swiftly, with a few good quips and a lot of good actors along the way. The bad news is that this doesn’t entirely make up for the central plot gimmick and some confusing transitions.

Two ships are blasting at each other somewhere in space. One ship crashes into Earth. Quinn McKenna (Boyd Holbrook) is an ace Army sniper who has been sent with his men to handle a cartel kidnapping situation in Mexico, which is interrupted by aforesaid crash. It’s not a spoiler to say that the craft contains a Predator (Brian Prince). For those who have never seen a PREDATOR movie before (it’s hard to imagine anybody starting with this one, but here goes), Predators are a species of alien that have dreadlocks, big mandibles and high-tech camouflage armor. They enjoy hunting dangerous prey, including heavily-armed humans (and capital-A Aliens).

This Predator turns out to have a somewhat different agenda, though he’s not shy about ripping people to bits. McKenna is left as the only survivor of the encounter. He gets his hands on some Predator gear, which he ships back home to his post box – or so he thinks. Due to a mix-up, the box winds up at the home of McKenna’s ex-wife Emily (Yvonne Strahovski) and their bright young son Rory (Jacob Tremblay), who is on the autism spectrum. Rory thinks his dad has sent him some new next-gen videogames.

Meanwhile, McKenna is scooped up by a secret military program headed up by the ambitious Traeger (Sterling K. Brown), who doesn’t want anybody blabbing about the extraterrestrials he’s studying. McKenna suspects he’s being set up to take the fall for the deaths of his men. He’s put on a bus with a group of ex-military psych patients.

The Predator himself is being examined by Traeger’s team of scientists, who include new recruit Dr. Casey Bracket (Olivia Munn). As excited as Bracket is to inspect an honest-to-goodness not-of-this-world being, her research doesn’t last long. Counter to both meta and in-film logic, the Predator has been sedated, even though nobody really knows how long he’ll stay that way, and is not very well restrained. No prizes for guessing how this turns out.

Dr. Bracket winds up on the run with McKenna and his dirty-half-dozen. Traeger is keen to obliterate all of them, in what seems like an extreme case of overzealous information control. Everybody is chasing after the Predator, who is chasing after his tech, which is in the hands of Rory. 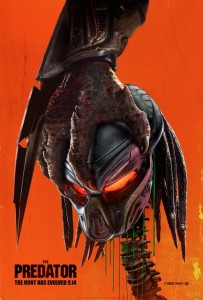 There’s plenty of running and gunning, blood splatter, spilling organs and things that go boom. Some of the jokes are actually funny – my favorite was a running gag about how several characters observe that “Predator” is really a misnomer for the creatures – though a lot are literally in the “Yo mama” category. It’s also nice to see an acknowledgement that an Asperger’s diagnosis just means someone (Rory, in this case) is different, not a burden or impossible to deal with. The back stories and connections between the ex-military men suffering PTSD suggest that director/co-writer Shane Black (who wrote the screenplay with Fred Dekker) has his heart in this aspect of THE PREDATOR, and there are touching bits here.

The other thing that suggests that’s what the filmmaker really cared about is that other parts of THE PREDATOR don’t make sense. Chief among these is the Predator’s reasons for being on Earth in the first place. When we find out what the Predator species has been doing here, we have to ask – are they actually meant to be that stupid, or (more likely) do the filmmakers for some reason think this is a good idea? Also, for all the research everybody’s been doing on Predators, it seems like somebody should mention clearly that Predators only attack humans who are armed. Guns down and there’s no threat. (There’s a message in there somewhere, but no one in any of the movies seems to care about it, so whatever.)

There’s also a bit of a problem with the Predator, who is more clearly an actor in a suit that Predators have ever been before. It’s great that the character is being done practically rather than as a CG effect, but surely a physical movement expert could have worked with the performer so that the Predator would walk and run like an alien, not so much like a guy in a suit.

Then there’s Traeger. Brown is clearly having a blast playing a badass bad guy (he’s spent the last few years playing soulful good guys on TV), and he’s great at it, but really, what is Traeger’s problem? It seems a huge waste of resources to keep trying to take out people who aren’t likely to cause him problems.

Holbrook handily holds the center of the film, and having him start out by observing a drug cartel is a nice in-joke (the actor starred in the first two seasons of NARCOS). Keegan-Michael Key and Thomas Jane are a fun double act as two of the men from the psych bus.

If you want a lot of gunfire and explosions, you’ve already seen MISSION: IMPOSSIBLE – FALLOUT and/or that’s not gory enough for you, THE PREDATOR is better than, say, PEPPERMINT. If you want a PREDATOR movie that’s scarier and more fun, try the original, or even 2010’s PREDATORS.