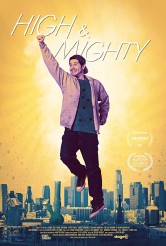 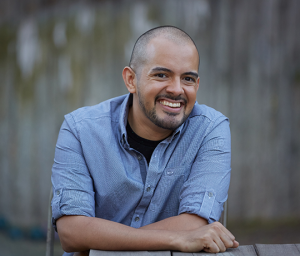 HIGH & MIGHTY is a superhero tale with a twist from creator Cesar Mazariegos. In the series, now streaming its first season on Warner Bros.’ digital platform Stage 13, slacker Chelo Chavez (Jorge Diaz) finds that he has superpowers – but only when he’s high.

“The powers correlate to how he feels,” Mazariegos explains. “So when he’s drunk, he feels super-strong, and he’s impenetrable, and he can break bricks. When he’s high, he floats. When he’s coked up, you’ll have to see what happens.”

At the outset, Mazariegos didn’t conceive of HIGH & MIGHTY as a series. “[The HIGH & MIGHTY pilot] is a script that I wrote as a stunt script, like something that could maybe get you an agent, maybe get me a couple meetings. And [Stage 13] came in. They were like, “We want to make this.” I was like, “Really? With all the coke and the drugs and the issues?” They were like, “Yeah, it’s great. It’s not this guy saves the world or saves the city. It’s just, can he save himself?” Props to Stage 13 for helping me make this dream come true. Thanks, guys.”

ASSIGNMENT X: Are you writing and directing all the episodes of HIGH & MIGHTY yourself?

CESAR MAZARIEGOS: I’m an executive producer and the writer. Carlos Lopez Estrada is our director. I hadn’t directed anything in so long, and there was so much writing on this that we really wanted to make sure I get it right, and he just had a lot of experience directing short-form and videos with a lot of style and color and a sense of humor. He’s a Mexican-American director and we just knew that he was going to nail it and get it right. If it happens, we’d love to have him for Season 2.

AX: Did you go through a casting process, or were the actors people that one of you had worked with before?

MAZARIEGOS: No, we definitely went through a casting process, much to the credit of [casting director] Barbara Stordahl and the people working with her. It was tough. Sometimes it was super-easy – “That’s exactly who we were looking for.” Sometimes, because of a lack of Latino actors working in Hollywood, specifically comedically, it was sometimes tough to find people. To their credit, again, they were able to find a lot of Latino actors who aren’t getting a lot of screen time. Some actors can just focus on comedy, but actors have to go for everything, sometimes drama, sometimes comedy. So we found the best of the best. I think everyone that we got is exactly who we wanted.

AX: When you put all of your episodes together, how long is the first season? 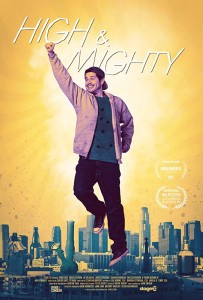 AX: So the HIGH & MIGHTY first season all together is like a feature film.

MAZARIEGOS: Yeah. It’s crazy. To go from the last thing I did was a couple sketches on YouTube, to ninety minutes, like a feature film.

AX: After writing the pilot, were you concerned about, “Well, Chelo’s superpowers have to look like X, so we don’t have to have a lot of VFX,” or did they give you the money to do VFX?

MAZARIEGOS: It was funny. Originally, when I came up with the idea, I had a friend who did VFX, who knew someone at El Rey. This was before I even knew about Stage 13. And this lady wanted to do VFX on something, but she wasn’t a writer. So she said, “Can you write something that’s just kind of low-fi, to the ground, and whatever you want to do, and then maybe at some point, we can do a five-minute sizzle real of something?” So that’s where the idea came from, was having the borders around me of, it exists in that world where it’s not a spaceship and busting through a wall like the Kool-Aid Man or whatever, it’s just a dude maybe floating, maybe punching really hard, and how do we do that in a different way, in ways that we haven’t seen yet?

AX: Did the woman wind up doing your VFX?

MAZARIEGOS: No, she moved to New York a couple of years ago actually. But we stay in contact and yeah, she’s having great success with a video effects company out there.

AX: It looks like Alexander Gabrielli is doing the VFX on HIGH & MIGHTY. Did you see the Will Smith slacker superhero film HANCOCK, and if so, did that enter your thought process when you were developing this?

MAZARIEGOS: Anything that was out there that was kind of in that vein, I was taking an extra-close look at, just to make sure that we weren’t doing the exact same thing. Years ago, when [HANCOCK] first came out, I was like, “This is an awesome idea and an awesome story.” Even that, again, this is a guy who stops a train with a punch or whatever and picks up a car and flies through the air, and he’s already an established guy. Our story was like that origin story, which is always my favorite part of these superhero stories – the guy looks at Spider-Man or Batman or Wonder Woman comes to realize, “Oh, this is what I’m capable of.” Except he’s stoned out of his head or drunk when he realizes, “What’s going on here?” So that’s the story, in a more low-fi, to-the-ground way, and a lot more about the drama of, “What are we doing?”, as opposed to stopping a bank heist, it’s like, “Oh, I can’t tell my girl that I was drinking today, even though I want to tell her I have these superpowers.”

AX: Did you have a writers’ room on HIGH & MIGHTY?

MAZARIEGOS: Through the Warner Brothers Writers Workshop, I got staffed on the Warner Brothers show DECEPTION. It was my first time in a writers’ room, which is why I came out here [to Los Angeles], to be kicking ideas around with nine people. With HIGH & MIGHTY, it was just me in a room, which was sometimes infuriating, because you’re the prosecution and the defense. “Does this make sense?” “No, it doesn’t make sense.” With [DECEPTION], with nine people in the room, it’s amazing to see people way more experienced than me, to watch them chop up a story. I [was] really, really appreciative the opportunity to learn from them, and to contribute.

AX: And what would you most like people to know about HIGH & MIGHTY?

MAZARIEGOS: That it’s funny and weird and I don’t think there’s anything like it out there, so please check it out. The pitch is UNBREAKABLE meets FRIDAY. Those are two movies that I love, and I think if people out there love those, they should check this out, and I think they’ll dig it.

This interview was conducted during Stage 13’s portion of the Television Critics Association (TCA) press tour.