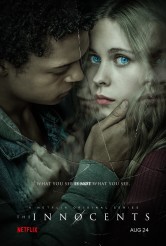 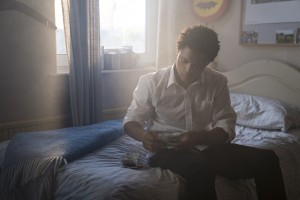 Netflix’s new science-fiction romance series THE INNOCENTS follows two English teens, Harry, played by Percelle Ascott, and June, portrayed by Sorcha Groundsell. June and Harry are in love and run away from their respective families so they can be together. In addition to the normal problems of their situation, the young couple discovers that June is a shape-shifter. Furthermore, June is not the kind of shape-shifter genre films and TV have given us so far – she turns into another specific person. Guy Pearce plays Dr. Halvorson, who is studying the shape-shifting phenomenon. Harry doesn’t trust Halvorson when it comes to June, and Halvorson doesn’t think Harry can help the young woman.

Pearce was born in England and raised in Australia. He first became internationally known for his role in THE ADVENTURES OF PRISCILLA, QUEEN OF THE DESERT. Since then, he’s starred and costarred in a number of features, including L.A.CONFIDENTIAL, THE TIME MACHINE, THE PROPOSITION, THE HURT LOCKER, THE KING’S SPEECH, PROMETHEUS, and IRON MAN 3. Pearce can also currently be seen on multiple seasons of the detective series JACK IRISH on Acorn TV.

Ascott is a young English actor who was a series regular on WIZARDS VS. ALIENS and stars in the upcoming horror feature THE DARE.

Both Pearce and Ascott talk animatedly together about their work on THE INNOCENTS.

ASSIGNMENT X: What made you decide you wanted to do a TV series at this point?

GUY PEARCE: Well, it wasn’t about just generally wanting to choose a TV series. It’s just that I read this [THE INNOCENTS], and really loved it, and had a great chat with Farren Blackburn, who is our prime director on the show, and he wanted to make it very clear that this idea of the shifting is to be grounded in a reality, in the same way that any medical condition might be, so that it shouldn’t feel too fanciful, or too science fiction, or too fantasy-oriented. It should feel as real as, as I said, any sort of medical condition. So just the sense of reality about it was really appealing to me, and it was just beautifully written by these guys [Hania Elkington and Simon Duric], and I thought the character was really interesting.

AX: Prior to learning that some people have this condition, did Halvorson have a belief in the unusual, or did this surprise him, or was he looking for something like this?

PEARCE: I think he’s somebody who’s probably been ostracized from the British medical community for unconventional methods. So he’s somebody who probably thinks outside of the square most of the time anyway in the ways in which he might look for respite or cures for people. So he’s probably come up against the traditional ways that the British medical community will have done things in the past, and he’s sort of pushed to the side, because his enthusiasm probably gets him into trouble at times. And so I think coming across something like this was ingrained in him, as far as wanting to discover something that other people hadn’t discovered yet. So when he did come across it, I think he just thought he’d struck gold.

AX: Is this your first series lead?

PERCELLE ASCOTT: This is my first series lead. I’d love to tell you the story [of how it happened]. I was in the audience, two years ago in Paris, for Netflix’s See What’s Next convention. And I was listening to Read Hastings talk on a stage like this. And I remember thinking to myself, “I want to be a part of the family of Netflix.” And then I met Farren Blackburn, the director of the show at that event two years ago, met him outside briefly for a chat, came into the audition room for THE INNOCENTS, and I saw him, and I clicked, and I was like, “Yes, you’re the guy.” And I just felt like, from reading the scripts, I wanted to be a part of it, but from knowing the director, and having that background of Netflix, immediately, I was like, “I have to be part of this show.”

AX:  Given that June sometimes literally is someone else, do you have an idea of what it is about her that Harry loves so unconditionally? What does he see in her that is unchanging?

ASCOTT: This thing with Harry is that, Harry’s the kind of kid to make the most noise in a room, but still the most lonely. And June is the character to see that vulnerability inside of him. For Harry, he can’t escape from being a chief carer [caregiver] with his dad, and his mum is constantly working, so he doesn’t have much of a family support. So someone like June loves him for who he is. And I think in that, when we’re searching for partners, we’re trying to find people who are compatible with us, who complete us. And I feel like, cheesy as it may sound, June completes Harry. And I feel like that’s why. 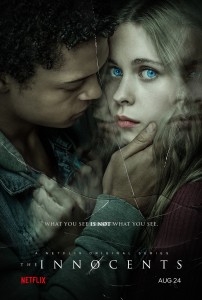 AX: Do the two of you have any scenes together?

PEARCE: Yeah. We have quite an important connection, because obviously I’ve taken June onboard and want to help her. Harry’s through the journey that Harry is experiencing with June. He’s very protective of her, but I don’t want to speak on your behalf …

PEARCE: And here I am as this doctor, living on an island, on my own, with this group of women who I’m trying to protect, which looks very much like a cult or something from an outsider’s point of view. Someone would come along and go, “What are you doing here?” So for a young guy like Harry, who’s going, “I want to protect my girlfriend,” and for a character like mine, who is not wanting to be infiltrated from the outside, some tension obviously occurs.

ASCOTT: I feel like we have similarity in terms of what we have to deal with, the fact that we’re not shifters, and we both have women [in our lives] who are shifters. And I feel like ultimately, there’s not a bad person – we both believe in what we’re doing to protect who we love.

PEARCE: Yes. But, interestingly, I think neither of us really trusts each other. So I don’t want him to cause me trouble, and he doesn’t want me to take advantage.

ASCOTT: [laughs] Absolutely. So we’ve got some interesting scenes coming up.

AX: Were you aware of Mr. Pearce’s work prior to working with him?

ASCOTT: Yeah, a hundred percent, absolutely. But the thing about Mr. Pearce here is that he makes us feel so composed on set. Though there’s a vast amount of experience there, ultimately, I still feel comfortable to make the choices that I’m making, and feel confident in that, and we both get to explore the scenes together. It’s something I’ve been saying constantly, but I’ve learned such a huge amount, just observing how Guy works, and that for me has been an absolute blessing.

AX: What is it like being the lone over-twenty-one male in the cast for most of the show?

PEARCE: [laughs] Look, I’ve been coming to terms with my aging over these past ten, twenty, thirty years, and it obviously manifests itself in different ways. You get older, and in a way, it’s great. Firstly, I get to watch great young talent coming up, and seeing what people can do. But also the roles that you then get to play, the dynamics that you then have within characters and opportunities you have, change all the time. So it’s great. All the roles I get to play are fascinating, I find. So there I was, on an island, with a bunch of lovely young ladies, so it was very fun [laughs].

AX: What would you both most like people to know about THE INNOCENTS?

PEARCE: It’s about a group of very normal people, but there’s just a very unusual and abnormal quality that exists amongst those people. And so I think that audiences should be able to relate to these very standard, average, normal people, but will be faced with the question of, how would they themselves deal with such a strange aspect like shifting, this genetic malfunction?

ASCOTT: Yeah. I would simply just say, it’s not just a shape-shifting show.

[Ascott and Pearce both laugh at the inadvertent alliteration.]

ASCOTT: It’s not just a show that is around teen romance. There’s so much more to that, and there are fantastic characters, and cast, that you get to explore and see as the show continues.