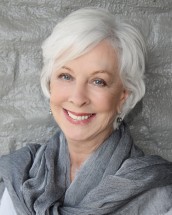 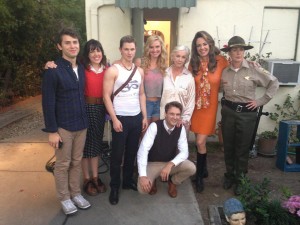 BREAK A HIP is a (so-far) two-season-long Web series that just picked up an Outstanding Actress in a Short Form Comedy or Drama for leading lady Christina Pickles. In BREAK A HIP, Pickles plays Biz Brantly, an unhappily retired actress who strikes up an unlikely friendship with her much younger assistant Wincy, played by Britt Hennemuth.

Pickles has been nominated for six previous Emmys, five for her supporting work as Nurse Helen Rosenthal on the medical drama ST. ELSEWHERE and one for her guest work in a comedy as Rachel and Ross’s mom on FRIENDS. Originally from England, Pickles has long worked in the United States in television, film and on stage – she was one of the stars of the Los Angeles premiere of Caryl Churchill’s gender-and-era-bending play CLOUD NINE.

The Emmy nominations have been announced but the awards have not at the time Pickles and her BREAK A HIP creator/writer/director Cameron Watson, who Pickles introduces as “my best friend,” sit down in a hotel lounge to talk their Web series and more.

ASSIGNMENT X: Were you also in CLOUD NINE?

CAMERON WATSON: No, but I saw it. Great show.

CHRISTINA PICKLES: Don Amendolia, who played the child, and came from New York, from the New York company, one day at rehearsal, I said, “I love this play.” And he looked at me and said, “It’ll change your life.” And in a sense, it did. It opened up possibility and hope and love. She’s a wonderful playwright. Cameron and I met at the theatre. Well, we met on a television pilot, but then we’ve done plays together. Cameron wrote BREAK A HIP from a play he had written.

WATSON: I’ve been an actor most of my career. We met many years ago as mutual actors, but I’ve started a directing career about twelve, thirteen years ago.

AX: Did you write the role of Biz specifically for Christina Pickles?

WATSON: I did. I had written it originally as a screenplay, based on some real episodes in my life. When I was a young actor, I took a job assisting, helping this older English actress – this is in real life – who wanted to hire a young kid to help her get things done, run errands. She lived alone –

PICKLES: She lived alone in a studio apartment in Hollywood with a Murphy bed. Her husband had died, and she had worked, and of course, she came to a period when she wasn’t working, and she had a very small amount of money, which she had enough to hire an assistant. And she was unbelievable rude and difficult. She met this assistant, and somehow they began to influence each other’s lives. He learned from her, and she learned a little bit of tolerance, as much as she could, from him. I guess it’s really about growing up and growing old.

WATSON: When she passed away in real life, I wrote a screenplay about the experience. And in the screenplay, it was called LONELY ON THE MOON, and it was kind of a darker story. It was a darker tone to it, there was a real sadness to it, and there were people interested in it. I directed a [reading of the script] and it got some attention, and there were some people interested in it, but I never could get it off the ground. It sat in the drawer for a long, long time, and we had lunch one day.

PICKLES: And I turned to him and said, “Cameron, we have to do a Web series.” And he looked at me and said, “And I know what it’s going to be about, and I’m going to go home and write it.” And he did [laughs]. 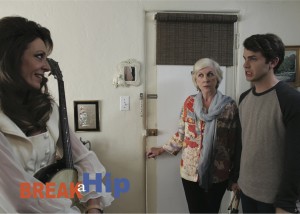 AX: Had you done BREAK A HIP on stage at that point?

PICKLES: No, I did the reading for the screenplay. I knew the character, but you created it.

WATSON: Yeah, we opened it up. Like I said, the original story was a little dark, and a little morose, there was almost a maudlin quality to it, and we decided we needed to open it up and hip it up a little bit. It quickly became a study in just growing up and growing old, this old-young connection that just took fire with this cast of very young actors that we wrote into the show, and them revolving around Christina’s character, and people being at the ends of the spectrum like that became really fascinating.

PICKLES: A lot of people live alone in studio apartments, and a lot of people are trying to get them out, because they want to raise the rent. My landlord is played by Allison Janney, and she’s absolutely marvelous and crazily interesting in the part. So we opened it up to humor, as well as humor, as well as real sensitivity to being old.

And so many people wanted to do it, because the script was so good. Our cinematographer [Seth Saint Vincent], who is an Emmy Award-winning cinematographer, wanted to be part of it, made room in his life to do it. Actors love good writing, so we got Peri Gilpin, Octavia Spencer plays my doctor, who my character refuses to believe she’s a doctor, she refers to her as “Nurse Oprah.” She’s so rude to her. But Octavia’s acting is so extraordinary, I as Biz felt something that I didn’t think I would feel. She began to reconsider her ways of looking at people.

AX: How did you come to cast Britt Hennemuth, who plays Biz’s assistant?

WATSON: I’m an acting teacher in [Los Angeles], I teach a master class at Pepperdine every year, and he was in the graduating class, and we were developing the series at that point, and I watched him do a monologue in the class, and I thought, “I think this is our Wincy, I think this is the kid.” He jumped on board right after he got out of college.

PICKLES: You were right. He’s a beautiful young man, very talented, natural actor. We were lucky to get him.

AX: Is the title of BREAK A HIP like the theatrical good luck saying “Break a leg” for older people?

WATSON: Like I said, the original screenplay was called LONELY ON THE MOON and when we reinvented it to make this Web series, we couldn’t think of a name. And we tried so hard. It used to be called OLD DOG, NEW TRICKS. It had all these terrible, terrible names. And one of our producers, Mason McCulley [who also plays Durwood in the series], I remember saying to him, “We need something catchy, like ‘Hello,’ or ‘Break a Leg’ or something.” He just looked up and said, “Break a Hip.” “That’s it, that’s the name of our show.”

AX: Now, when you guys started out doing BREAK A HIP, was there any thought in your mind of Emmy Awards?

WATSON: We really are. And once we realized that we could qualify, that Season 2 did qualify for the Emmys, with Christina having six previous Emmy nominations, and being so beloved, we thought, “Well, there’s a chance. People like our show, and she’s a beloved actress in this town,” and we hung a lot of hope on it, and we were just so happy the day the nominations came out.

PICKLES: Very excited. I kind of didn’t dare to think about it, because hope is such a terribly disappointing thing. And then it happened [laughs] and I was just over the moon. 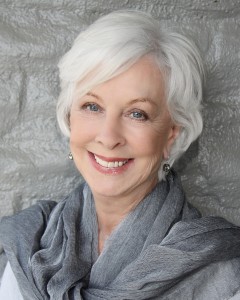 AX: Was the purpose in making BREAK A HIP  as a Web series essentially, “We really would like to tell this story, and this is the best medium for it”?

PICKLES: Yes. “We’d like to tell the story, and work with our friends, and people who want to be part of this.” It’s a very creative feeling, like we felt when we were young, when we went into the business, and how in this business, you don’t have much control, but we had control with this, and we did wonderful work. I’ve never been happier than when I was working on this. We’ve done two seasons, and we shot eight episodes for each season, and we shoot a season in nine days.

WATSON: I was just so happy. Allison [Janney] came that day, we had her for one day to shoot that first episode. Before she went on set, I handed her a banjo, and I said, “I think [Janney’s character] plays the banjo.” She said, “I don’t play the banjo.” I went, “I know. It doesn’t matter. Go.” She said, “What do you want me to do with it?” I went, “I don’t care what you do with it. Just go. Let’s shoot it.” And we had the best day, and at the end of the day, she said, “I had so much fun on the set, because it was so free. And nobody was over my shoulder, saying, ‘You can’t do this, you can’t do this’.” And that’s why we wanted to make this series, is to be completely artistically free, and create a story that we wanted to tell from our hearts.

PICKLES: We also want to sell it. We would love to go to [a network or pay streaming service] series, and we recognize that when we do, we may not have quite so much control over it. But we’re willing to play.

AX: Where can people find BREAK A HIP now? On Vimeo?

WATSON: Our home is our website, breakahip.com, and all the episodes are there, sixteen episodes, two seasons.

AX: How long are the episodes?

WATSON: They’re between eight and eleven minutes. The average running time is about nine-and-a-half minutes.

AX: So each season is a little over an hour when it’s all put together?

WATSON: I think Season 2 was in total an hour and twenty minutes, complete.

AX: So a season is about the length of a movie.

WATSON: [laughs] We realized that after we shot it in nine days. We put it all together and then you think, “Oh, wow, we shot a movie in nine days, basically.” We shot a lot of content.

PICKLES: Amazing what you can do now.

AX: Are you making a third season of BREAK A HIP?

WATSON: We are. We’re in development with scripts with that right now. We want to get going on that as soon as possible.

PICKLES: You have to sit down and write it, but before he does that, he’s going to direct THE LITTLE FOXES at Antaeus Company. [The production runs October 18-December 10 at the Antaeus Theatre Company in Glendale, California.] He’s a very great director.

AX: And what would you most like people to know about BREAK A HIP?

WATSON: To watch it.

PICKLES: It’s about growing up and growing old. It’s got a lot of heart, but it’s funny. And she’s a terribly rude woman. She pushes a child in the supermarket parking lot, and she does terrible things, but it’s because when people do terrible things sometimes, they’re hurting a lot. And she’s lonely. And she doesn’t know what to do with her life. She was an actress. She’s not working. And when she meets this young man, he sort of opens her up. And he learns from her, too. She was a very good actress, and she gets quite involved in his acting. She’s brutal about it [laughs] – she says, “You’re a terrible actor.” But they change each other, they need each other, and there are a lot of young people in this cast. So it’s not just about old people. There are lots of kids.

WATSON: And it’s easy entertainment. You can watch it on your phone. The show lives on our website. We’re on Vimeo, but we have our website, breakahip.com, and you can literally watch an episode sitting here in the lobby waiting for somebody to come. It’s so accessible and easy and fun to watch with a little effort.