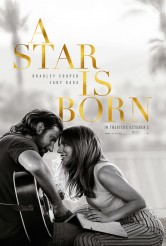 Movie Review: A STAR IS BORN 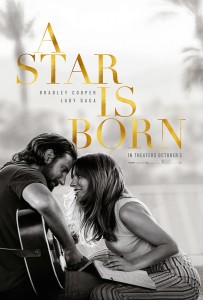 The new version of A STAR IS BORN proves that even the most familiar material can be great when done right. Bradley Cooper, as director, star and co-writer, makes this tale as old as time shine like new, with the help of costar Lady Gaga and a strong musical score (some of which Cooper and Lady Gaga also wrote).

In Cooper’s new version, his Jackson Maine is a major rock star with a massive following – and a just as massive substance abuse problem. He’s also got tinnitus, which is chipping away at his hearing, which in turn is affecting his morale, which is making the drinking/drugging worse. After a gig one night, Jack and his driver (Greg Grunberg) wind up in an unfamiliar part of town. Wanting another drink, Jackson walks into the nearest bar, which happens to be a drag diva joint. Ally (Lady Gaga) comes onstage and does a standout rendition of “La Vie en Rose.” Jack is enchanted and lets himself be taken backstage by Ally’s best pal Ramon (Anthony Ramos) to meet the performer, even before Jack finds out that, unlike the other performers, Ally is a cis-gendered woman.

Jack coaxes Ally out for a drink, he finds out she writes her own songs, he’s even more smitten. Ally is trying not to have her head turned by being courted by a superstar, but as any creative person will attest, it’s hard to turn away someone who is sincerely admiring and supportive of that creativity.

The first half of A STAR IS BORN is therefore romantic wish fulfillment – a warm, charming tale of two attractive people who help each other blossom. Ally’s songs are appealing in a soulful pop/rock way, maybe a bit more Carole King than Lady Gaga, whereas Jackson’s growly rock recalls Bob Seger; his band’s numbers have such a heavy bass that the sets are essentially in Sensurround. When Jack brings Ally onstage to sing with him, we understand why the crowd goes wild.

Then there’s the second part, as Ally’s star ascends and Jack is somewhere between jealous and melancholy and insecure. There are fine lines within all of this, but they are handled with commendable intelligence. When Jack starts carping about the way in which Ally is being commercialized, yeah, he’s drunk and insensitive, but we feel that he actually has a point. When he’s sober, he’s romantic as hell, and when he’s contrite, Cooper makes us truly feel the ache in his heart.

As for Ally, Lady Gaga makes her arc from wry innocence and insecurity to joy to confidence to self-awareness wholly convincing. The performer gives the character a solid identity that never winks at Lady Gaga’s real-life superstar status.

Also notable is Sam Elliott as Jack’s hard-used older brother Bobby. Elliott’s understatement makes his emotions that much more powerful. If the actor doesn’t get a nomination (at least) for his work here, it will be surprising and disappointing.

There are a couple quibbles, mainly dealing with events that happen near the end. This A STAR IS BORN has a more clear-cut villain than its predecessors. While the impulse to maintain a clear trajectory to the finale makes sense, we’re left wanting some resolution in that department that never comes.

Otherwise, this version of A STAR IS BORN has it all: dynamic performances, great chemistry between the leads, engaging music and solid emotional hooks. Even viewers who are generally resistant to romantic musical tragedies may find themselves moved by this film.