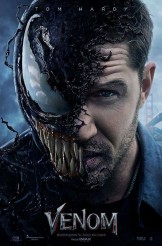 An okay tale of a guy and his symbiote 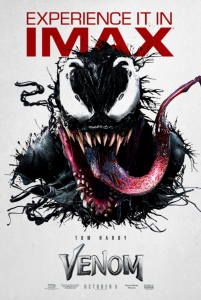 VENOM the movie is based on the VENOM Marvel Comics created by Todd McFarlane and David Michelinie. Full disclosure: this reviewer knows practically nothing about the character Venom, save what is in Wikipedia was in the 2007 SPIDER-MAN 3 movie, where he was played by Topher Grace. This reviewer is therefore unqualified to say whether this VENOM honors, disgraces, or utterly ignores its origins.

In this VENOM, directed by Ruben Fleischer from a screenplay by Scott Rosenberg & Jeff Pinkner and Kelly Marcel and Will Beall, based on a story by Rosenberg & Pinkner, a privately-owned research spacecraft crashes into the jungles of eastern Malaysia. On board are a number of tentacle extraterrestrial specimens, one of which crawls away in the aftermath of the disaster.

Dedicated but reckless video journalist Eddie Brock (Tom Hardy) is supposed to do a softball interview with zillionaire industrialist and cancer curer Carlton Drake (Riz Ahmed) about the crash, since the spacecraft was launched by Drake’s company. Instead, Brock tries to press Drake on unethical medical experiments. In short order, Eddie gets himself fired, which also leads to the firing of Eddie’s fiancée, lawyer Anne Weying (Michelle Williams), which leads immediately to the couple breaking up.

Six months later, Eddie is broke and drinking way too much, when he’s approached by scientist Dr. Skirth (Jenny Slate), who works for Drake. Skirth promises to help Eddie prove that Drake is killing homeless people by trying to merge them with the alien samples recovered from the crash. The problem (apart of course from the obvious) is that the alien symbiote and the human host must be completely compatible, or else both die. Eddie accompanies Skirth to the lab, and winds up with a symbiote (don’t call him a parasite, thanks) who announces his name is Venom. Oh, and don’t forget about the alien that is still on the loose in Malaysia.

If this sounds like a lot of set-up in order to get to the title character and set the main plot in motion, it is. While there are scenes that pay off later, we get a little too much of Eddie moping and wanting to get back with Anne. Once Eddie and Venom get together, the action picks up considerably. Things whipsaw back and forth whether Venom is more harmful or helpful and what the stakes are for planet Earth overall.

VENOM feels a little like DEADPOOL and David Cronenberg’s THE FLY had a baby that couldn’t quite emulate either parent in fourth-wall-breaking irreverence or dramatic heft, respectively. Actor Hardy is on record as saying that forty minutes have been cut out of the final version. Some of the missing material was surely R-rated, and the present version is plenty violent, even if the editing no longer dwells on certain aspects of what’s going on (the eating of human heads, for instance). Minus further information, it’s hard to guess what else might have been in there, and whether we’re missing something that might have made VENOM better, or if the cuts prevent VENOM from just being longer.

Still, the storytelling is pretty easy to follow – we’re clear on who’s who and why they want what they want, and there is a coherent narrative reason for why the symbiotes aren’t leaping into all and sundry. People are likely to be sharply divided over the CG. It’s not exactly naturalistic, but if one can appreciate trippy nightmarish animation, it’s fun. There are moments that are just plain silly – you practically expect the deep-voiced Venom to burst out singing “Feed Me” from LITTLE SHOP OF HORRORS – but since the movie never seeks to get too deep, this is amusing rather than a tonal violation.

Hardy is enjoyable as the weirded-out Eddie. Williams is fine, though underused, and Ahmed gives his mad scientist a degree of joy and conviction that engages us. 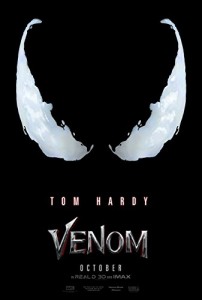 In the tradition of most Marvel movies, there is a mid-credits scene, and a bonus post-credits sequence.

VENOM doesn’t have either the hilarity or the weight of the best superhero movies. That said, it’s diverting in the way of something that doesn’t invent anything new, but still checks off its boxes with enthusiasm.