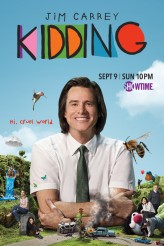 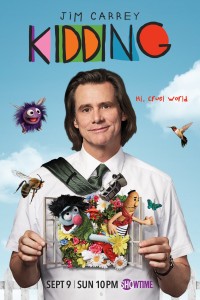 In Showtime’s new Sunday-night series KIDDING, Jim Carrey returns to episodic television. Carrey plays Jeff, a beloved children’s TV host who interacts on his show with a multitude of puppets. Jeff has gone through a tragic loss, and wants to be honest about it with his audience – to the horror of his producers, who just want the profits to flow as they always have.

KIDDING creator Dave Holstein is on a Q&A panel for the show with a group that includes his fellow executive producers Carrey and Michel Gondry. Gondry previously directed Carrey in the feature ETERNAL SUNSHINE OF THE SPOTLESS MIND and has helmed the majority of the episodes of KIDDING.

On the panel, Holstein talks KIDDING with reporters and his colleagues. Afterwards, the writer/producer takes time for some one-on-one follow-up discussion.

First off, Holstein acknowledges that the premise of KIDDING is not unlike what would happen if MR. ROGERS and SESAME STREET had a nervous breakdown together. However, “To me, it was less about finding a character whose journey was a nervous breakdown, and more about coming off a show like WEEDS [on which Holstein was a writer/co-producer] that was full of antiheroes and having a sort of fatigue of characters who existed because they were f***ing hookers or doing drugs or killing people, and actually trying to find the journey of somebody who didn’t want to break bad, but wanted to stay good. So to me, it was about finding someone who had a crisis of faith, but really wanted to preserve their goodness in a world that was populated by all the dark edges of premium cable, but not the character himself.

“To us, it wasn’t about crafting an arc about, here is someone having a nervous breakdown, or psycho Mr. Rogers. It was about finding someone who, in an age of darkness that we currently live in, with lies and bullying and all that, to find a character who doesn’t curse, who doesn’t lie, who just wants to be good and to stay good against the struggle of everything around him, felt more of what would give us a trajectory.”

Something Holstein enjoys about KIDDING is that it lends itself to multiple points of view. “I think the really fun challenge of this show is that it was really easy to write from the perspective of any character in the cast, Frank [Langella as Jeff’s father Seb]’s perspective, or Catherine [Keener as Jeff’s protective puppet-making sister Deirdre]’s perspective, where there’s this creepy weirdo at the center of it that believes in all these naïve optimistic things, and it’s very easy to look down on that person and not empathize with him. Because on paper, he’s buying a house next door to his ex-wife [played by Judy Greer], and there are a lot of things that wouldn’t be normal. But if you take that and apply it to someone with the moral caliber of Mr. Rogers, maybe, just maybe, you could empathize with that person.”

Holstein says he wrote the role of Jeff with Jim Carrey in mind, but never expected the actor to actually do it. “It is kind of weird and ironic. I was looking at my computer on the first date of the file I had in this folder, and it was from 2010. I wrote this [KIDDING] completely on spec, right around the time WEEDS was down just to write the coolest thing that no one’s ever going to make. And I wrote, ‘Jeff Pickles, think Jim Carrey.’ I really did that. And then I told my agent. I said, ‘That’s the plan. That’s what I really want to do.’ And they were like, ‘Who else do you really want to be in this? He’ll never do television.’ And I’m like, ‘All right. A boy can dream.’ And then I don’t know how I’m sitting on this stage, frankly. Eight years later, Jim finally god hold of it and wanted to do it. It was so crazy to think we had gone out, treated it as a regular television show, and then when someone stepped in and made it, it was actually Jim, so it’s crazy.”

ASSIGNMENT X: When you first wrote KIDDING, did you give any thought as to how it would be made, and how it would look, what the puppets would be like, or …?

DAVE HOLSTEIN: I just wanted the freedom to be really inventive with it. I didn’t want rules. I think that having Michel around gives you a lot of freedom to break rules, and to not follow a visual style that you’ve seen before, but I don’t know. All I knew was that we were going to try to be as different from what else is out there as possible. 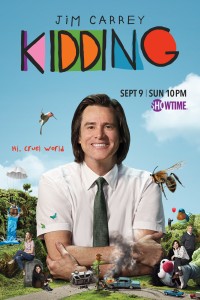 AX: What came first, the idea of the children’s puppet show or the idea of someone trying to get out of severe depression?

HOLSTEIN: It came from thinking about the worst thing that could happen to a very good person, and I think we all think of ourselves as having an innate sense of good somewhere. For me, it was just channeling, what would it take to crush my spirit, and also, what would it take to crush Jeff’s? And how to fight through that? And it’s the fighting through that that gives us our story, and our momentum.

AX: Does having Jim Carrey give KIDDING an extra layer?

HOLSTEIN: God, I hope so. Jim is really brilliant, and he has such a warm core as a person. He’s very generous, and I can’t think of anybody else in this role. And what he’s been able to do is take it and make it something that is comedic in a way I did not think it could be comedic, and dramatic in a way I did not know it could be dramatic. He has a wonderful way of establishing a tone about himself that he’s done in some of my favorite movies, and he really brought it to this.

AX: Is there anything political in KIDDING, like maybe one of Jim Carrey’s cartoons as graffiti in the background?

AX: How big is the KIDDING writers’ room?

HOLSTEIN: We have eight writers and two assistants who contribute.

AX: Was it difficult to get all the writers on the same wavelength, because it’s such an idiosyncratic wavelength?

HOLSTEIN: We interviewed a lot of writers, and I picked the ones who I knew would understand we’re going to do something weird, we’re going to do something different. I picked writers who came from theatre, who came from features, who had a visual style, or who had a desire to be idiosyncratic. I think we started with people who didn’t have so much of a seasoned television background, so we didn’t have to beat anything out of them. They all came ready to play.

AX: And are you finding that the puppet characters are taking on actual character?

HOLSTEIN: Oh, yeah. We have some of the best puppeteers who voice the puppets, and give them a lot of life. And all of them have a lot of back story and a lot of thought put into them, and we use them throughout the season.

HOLSTEIN: Well, I have a pilot at Showtime called MOONSHINE that I’m really excited about that I’m working on right now.

AX: And what would you most like people to know about KIDDING?

HOLSTEIN: That it’s really something different.