Home » Into the Dark: The Body movie/TV review 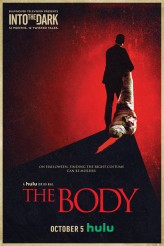 ©2018 Hulu/Blumhouse
INTO THE DARK: THE BODY Key Art
Reviews

Movie/TV Review: INTO THE DARK: THE BODY

Not so much horror as pitch-black comedy

Hulu and Blumhouse are collaborating on INTO THE DARK, a series of full-length horror films, to be rolled out exclusively on Hulu, one holiday per month, for twelve months. The opening entry is THE BODY. Based on a short film directed by Paul Davis and written by Davis & Paul Fischer, both of whom fill the same functions here, THE BODY is certainly suspenseful, but on balance plays more as a pitch-black comedy than an exercise in pure terror. Davis, who also made BEWARE THE MOON, the documentary about the making of John Landis’s AN AMERICAN WEREWOLF IN LONDON, seems to be going for that seminal film’s mix of laughs and scares. Davis doesn’t quite achieve that balance, but what he does still works strikingly well.

In THE BODY, we meet hit man Wilkes (Tom Bateman) right after he’s finished a job in a Los Angeles-area penthouse. Wilkes is an elegant British man who dresses like James Bond and has qualms about his work, or much of anything else. His boss tells him over the phone that he should turn over the corpse of his victim at 2 AM. His clothes clean, though with blood streaking his face, Wilkes wraps the body in plastic and takes it down to the street. This being Halloween night, everyone assumes that Wilkes is brilliantly costumed as a sophisticated hit man, dragging along a large and impressive prop to sell the costume.

A trio of twentysomething partyers – Dorothy (Aurora Perrineau), Alan (David Hull), and Nick (Harvey Guillen) – encounter Wilkes just as the hit man discovers some vandal has slashed his tires as a Halloween prank. Alan and Nick want to impress their Hollywood pal Jack (Ray Santiago) at his big-deal party and think Wilkes’s awesome costume and incredible commitment to his character will do the trick. Wilkes needs a ride, so he agrees to briefly attend the party. Jack is indeed duly impressed, and so is Jack’s assistant, computer whiz Maggie (Rebecca Rittenhouse), who is inspired to imagine what an assassin’s life might be like. And then …

The filmmakers and Bateman pull off something difficult and uncommon: a horror antagonist who is a well-developed and even charismatic character, able to interact normally with other people, but also with the sadism and hard-to-stop nature of a traditional slasher killer (think Michael Myers, Jason Voorhees, Freddy Krueger). Wilkes doesn’t do what he does entirely out of sport, but he’s quick to see threats and responds to any provocation by administering added pain. 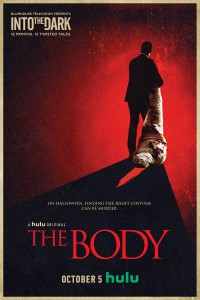 Rittenhouse makes Maggie intriguing as well, another sort of character we don’t see often. She has confidence, intelligence and allure, though she never displays the mean streak that seems called for.

Perrineau is particularly likeable as the stalwart Dorothy, and Santiago, late of TV’s ASH VS EVIL DEAD, has amusing bluster as the arrogant guy who can’t deal when stuff gets real.

The stalking is pure horror movie, and the kills are very splatter-heavy. However, the characters are all aware of the genre. The dialogue is often humorous, though it sometimes gets a little too meta, stepping on the toes of some scares. The abundance of this, and the interplay between Wilkes and Maggie, tilts the balance toward black comedy rather than pure horror.

This aside, THE BODY gets INTO THE DARK off to a fine start.