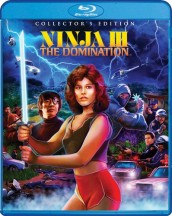 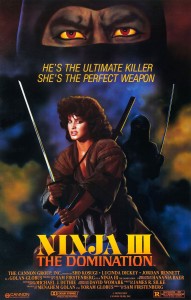 The output of infamous exploitation production company Cannon Films from the 1980s was filled with action films starring Chuck Norris, Charles Bronson, Michael Dudikoff, but their other magic touch was riding the wave of current trends and then remixing them out of the stratosphere.

In addition to the conventional break dancing films BREAKIN’ and the far more memorable sequel title of BREAKIN’ 2: ELECTRIC BOOGALOO, they hit their apex in trend squatting with NINJA III: THE DOMINATION in 1984.

After two semi-successful traditional ninja movies ENTER THE NINJA and RETURN OF THE NINJA, they went full rogue with NINJA III mixing martial arts, possession and aerobics into one of the most ridiculously addictive hybrid exploitation movies.

First off, don’t expect to understand the story or the actual point of the movie. For some reason, a ninja goes full Rambo on a golf course for no apparent reason. The police gun the ninja down, but his soul possesses a nearby telephone repairwoman and aerobics instructor Christie Ryder (Lucinda Dickey). The reason? The ninja needs revenge on those that killed him.

Yes, the ninja who killed a whole bunch of people and cops, is getting revenge on the cops who killed him, even though they were in the right for killing him in the first place. 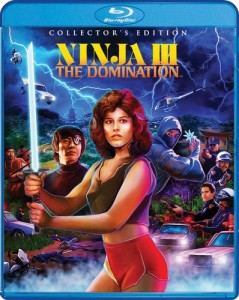 While there are obligatory aerobics studio scenes, it’s when the movie veers into horror that it tops itself. The possession scenes are strange, weird and quite funny, but at its heart is a pretty solid performance by Dickey who does her best playing both a carefree spandex wearing 1980s woman and a cold-blooded ninja killer.

Attempting to add some story into the bix, Christie’s cop boyfriend (Jordan Bennett)  tries to help rid her soul from this crazy ninja while Sho Kosugi (who appeared the first two NINJA movies as difference characters) shows up to add some more martial arts cred as the evil ninja’s nemesis.

After a DVD/Blu-ray hybrid a couple of years ago, Shout! Factory has now given us a Collector’s Edition of NINJA III: THE DOMINATION. A new 4K scan of the film gives us the best looking version of this movie to date (though the last release wasn’t half bad either – this is after all a low budget exploitation movie, so good, not pristine would have been good enough). There are new interview features with Dickey, Bennett ad producer/stuntman Alan Amiel. New audio interviews feature production designer Elliot Ellentuck and co-composer Misha Segal, a trailers from hell commentary by screenwriter Josh Olson, still gallery and audio commentary by Firstenberg and stunt coordinator Steve Lambert.

This is jam-packed and the ultimate edition of the film. It’s surprising how the third film in this franchise has gained more cult notoriety than the first two films in the franchise, but since there is literally (and will never be) anything quite like this film, it’s a cult status well-earned.

If you haven’t seen NINJA III: THE DOMINATION, now’s the time. After the first three minutes you will be hooked until the end.