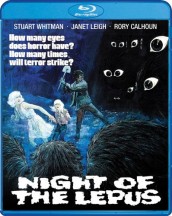 Blu-ray Review: NIGHT OF THE LEPUS

Yes, it's a killer rabbit movie as this 1972 thriller gets remastered and unleashed once again 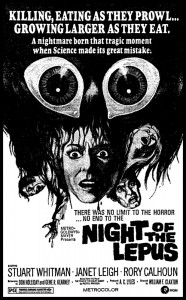 Every once and awhile, you’ll scratch your heard and wonder “How did that film get made?” Usually it’s a film so utterly sincere and yet clueless at the same time, you just watch the train wreck unfold and enjoy it for what it is.

Such is the case of curious 1972 science fiction thriller NIGHT OF THE LEPUS. MGM originally called the film RABBITS based on the novel THE YEAR OF THE ANGRY RABBIT by Russell Braddon, but cooler heads prevailed and realized making a film about yes, killer oversized rabbits, would be a tough sell. That’s why using the Latin term for Rabbits – “Lepus” – was the compromise to sell a creature film that would end up being more mysterious to oblivious audience members.

Viewed with a modern day lens, NIGHT OF THE LEPUS isn’t as terrible as the concept may sound. It’s so earnest, it’s hard to hate. And the fact that many people involved with the film (the director, producer, stars) have ties to westerns, results in a strange hybrid science-fiction film that feels more like an oater with killer rabbits than a traditional monster movie which makes it even more odd and unique. 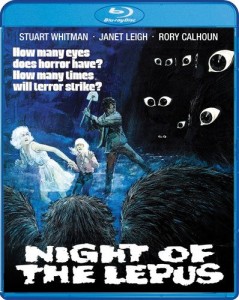 The story is set in Arizona where an out-of-control rabbit population is destroying crops, farms and killing coyotes. Rancher Cole Hillman (Rory Calhoun) needs a solution short of poisoning them. With the help of STAR TREK star Deforest Kelley playing Elgin Clark a professor who thinks a married researcher team of Roy and Gerry Bennett (Stuart Whitman, Janet Leigh) might have a more civil solution. With some experiments and a serum to hopefully inhibit the rabbits libidos is tested, the results turn deadly when the rabbits grow to enormous size. That includes an appetite for the blood of anything that gets in their way (horses, humans – THE WORLD!)

At 87 minutes, NIGHT OF THE LEPUS is fast paced and produced at a time when computer generated animation was a couple of decades away. To compensate, director William F. Claxton had to rely on miniature sets to make the rabbits look bigger then they actually were. Some of these shots are actually quite impressive. Then there’s the questionable “guy in a rabbit suit” shots that are, thank goodness, brief, but laughable at times.

Still, the problem is a simple one: there is no way you can make rabbits scary. I’m sorry, they’re not scary. And one of the problems that occurs in the film, is that no matter how evil they try to make them, they’re still pretty darn cute. And when the slaughter begins and we’re supposed to root for their annihilation, you feel bad for them because, well, they’re BUNNIES dammit!

Nonetheless, the cast plays everything straight and having Janet Leigh in the film is always a welcome addition. She knows how to ground horrific situations and does a great job here with the limited material she’s given. 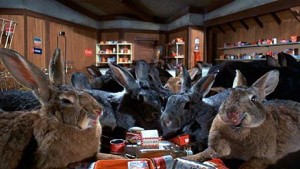 The killer rabbits from NIGHT OF THE LEPUS | ©1972 MGM

Shout! Factory offers up a nice Blu-ray presentation with only the theatrical trailer as a bonus. This is a 2K scan from the interpositive negative and in addition to trailers, still gallery and TV spots there are two new audio commentaries. One by author Lee Gambin and another from pop culture historian Russell Dyball. Considering NIGHT OF LEPUS never saw a home video release until 33 years after it’s theatrical run shows how much this movie was brushed under the rug. Time offers a different perspective, and this has definitely become a cult curio item – enjoyable for its ridiculousness and noble for playing it straight as an arrow. Is it perfect, no, but as part of the 1970s cannon of oversized creature movies (FOOD OF THE GODS, EMPIRE OF THE ANTS), it’s a nice time capsule of a science-fiction film using limited resources and ingenuity to tell the best (and only) mainstream movie about killer rabbits ever.

Purchase NIGHT OF THE LEPUS HERE