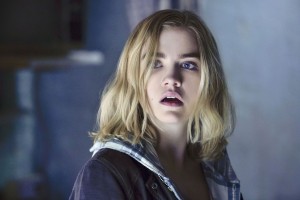 Hasson, originally from North Carolina, began dancing at age seven before moving on to acting. Her film and television credits include THE FINDER, TWISTED, I SAW THE LIGHT, NOVITIATE and MR. MERCEDES.

After a Q&A panel for IMPULSE, Hasson takes time to discuss her work on the show in greater detail.

ASSIGNMENT X: How did you become involved with IMPULSE?

AX: Where are you meant to be – that is, where is IMPULSE set?

AX: Henry’s superpower seems like it could be a metaphor for the transition that people hopefully go through some time in adolescence, of starting to figure out who you are as an adult, and starting to figure out that you can have a voice and a presence that has an impact. How much would you say Henry’s ability is an analogy for that, and how much is it an actual superpower?

HASSON: That’s a difficult question to answer. I think for me in the show, it’s not very superpower-y. This thing is sort of thrust upon her. She originally thinks that she has seizures, so she’s going to the doctor all the time, she’s not allowed to drive a car, they think she has epilepsy. We realize that these seizures are her body trying to teleport, and eventually she does. And it happens in situations when she’s protecting herself. So it’s not very traditional superpowered, superhero-y. It’s very much a way of escaping something.

AX: Does Henry ever get a handle on it?

HASSON: We’ll see. I think it’s a long road for her to be able to get a handle on it, because it’s so connected to this assault, and I think in the beginning, she does not want to think about the assault. She does not want the assault to have happened, and I think in the same way, she doesn’t want to think about teleportation, because that makes it all real.

AX: Did you study people with epilepsy or any kind of other seizure issues for when Henry has her pre-teleporting seizures?

HASSON: Yes. I spoke to somebody I know personally who’s had seizures, which was a huge help to me, and I watched a lot of videos, and did a lot of practice, and I tried to make it look as real as possible.

AX: What is actually happening to Henry in story terms when she’s having one of these events?

HASSON: How it was explained to me is, she goes into this seizure because it’s kind of her body vibrating between these two places, and then there’s a collapse of gravity around her, and she returns back to her bedroom, which is kind of her safe place that she always goes back to. 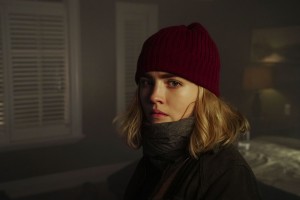 AX: What is the core of Henry for you? What was the aspect that enabled you go, “Well, I know this about her,” to get into her?

HASSON: For me, Henry is somebody that I think, as a teenager, before I really came into myself, I very much was Henry. I was very similar to her. I didn’t want to let anybody in, I didn’t want to let anybody see my true self. I think Henry feels kind of above it all as a way to defend herself from people that she thinks won’t accept her, and so she has this sort of “too cool for school” kind of attitude, which I think is common when you feel scared of rejection and scared of not being accepted.

AX: Henry likes to do graffiti. Do they let you let loose with a paint can?

HASSON: You know, I don’t think it would be a good idea if I was the one doing the graffiti [laughs], because they got a really good artist to do the actual graffiti, and the graffiti paint cans that I use are a fake kind, so it goes on a little bit, but I mostly trace, which I think on their part was a sound idea. I’m not artistic in that way. I’m artistic in an I like to have fun and improv on the set kind of way, but I’m not artistic in the on-paper kind of way.

AX: How much do they allow you to improvise?

HASSON: A lot. There’s a lot of freedom, which is so wonderful. I think as actors we get a lot of respect, because they know how much each of us has studied each individual character. I think from the very beginning, we all wanted it to be as real as possible, because it’s a very emotionally driven, personal show, with very real-seeming characters. It’s not just sci-fi, it’s about relationships. So when we shot the pilot, I think a precedent was set in which we could have that freedom. I think [IMPULSE co-creator/executive producer/director] Doug [Liman] wanted it to be that way, and it’s remained that way through the first season.

AX: How is working with Doug Liman?

AX: How was working with Kristian Bruun, who plays Henry’s high school teacher?

HASSON: Oh, he’s lovely. He’s wonderful. I think he’s really talented. He was in HANDMAID’S TALE as well, I think. I haven’t seen all of HANDMAID’S TALE, but he’s actually one of my favorite characters in that show, even though he’s in it for such a small amount of time, I thought that scene was genius.

AX: And what would you most like people to know about IMPULSE?

HASSON: I would like people to know that IMPULSE is not just a sci-fi action show. It’s more than that. It’s about people, and love, and the intricate lives of these ordinary people in this small town that are faced with extraordinary circumstances.

This interview was conducted during YouTube Premium’s portion of the Television Critics Association (TCA) press tour.