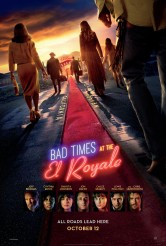 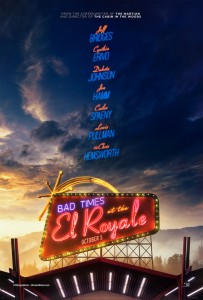 After a brief prologue, BAD TIMES AT THE EL ROYALE starts out like the set-up to a joke, with an out-of-the-way motel standing in for a bar. A priest (Jeff Bridges), a singer (Cynthia Erivo), a vacuum cleaner salesman (Jon Hamm), and a really cranky young woman (Dakota Johnson) all walk into the El Royale. This is not a comedy, though the crime drama has its fair share of humor, black and otherwise.

BAD TIMES AT THE EL ROYALE is set in the early ‘70s. Nixon has yet to fall from grace, and the décor is period tacky. Nobody has cell phones or computers, though the technology of the day factors into the proceedings. As nervous young hotel manager Miles Miller (Lewis Pullman) informs everyone on the brief tour, the El Royale in its heyday was a magnet for celebrities and politicians. The establishment straddles the California/Nevada border, with a painted dividing line down the middle of the lobby indicating which state is which. (Because the El Royale lost its gaming license, guests can now only drink alcohol on the California side.) This impacts the story in various ways, though never as much as we might expect, given its prominence.

We’ve already seen that a man (Nick Offerman) has painstakingly hidden a suitcase beneath the floorboards of one of the rooms, only to be bloodily blown away shortly afterwards. The bulk of BAD TIMES AT THE EL ROYALE takes place about a decade later, though there are copious flashbacks explaining what that suitcase is doing there, as well as various unrelated events. It’s not exactly surprising that some of the characters aren’t exactly who they appear to be; given the gore level of this complicated crime drama, what’s more unexpected is that the movie has compassion for most of them. 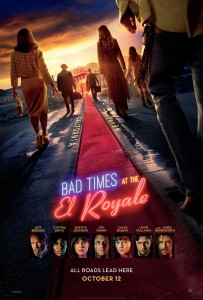 The structure and story of BAD TIMES AT THE EL ROYALE are reminiscent of Quentin Tarantino’s work. However, writer/director Drew Goddard doesn’t try to overlap things quite so much, nor does he feel the need to give each character a full measure of darkness. There are exceptions. Chris Hemsworth’s character shows up late in the game and is suitably toxic, with Hemsworth reveling in the man’s self-regard. Mostly, though, Goddard gives everyone solid reasons for what they’re doing, even if it causes them to indulge in some extreme antisocial behavior.

The big acting news here is Erivo, a Broadway star whose previous onscreen credits have been on television, though she’s got a number of upcoming features (WIDOWS opens next month). Her conviction is thorough and her singing voice is glorious. When another character becomes smitten with her sound, we empathize completely.

Pullman is also notable as the conflicted hotel employee, and Johnson displays a multitude of sides. Cailee Spaeny, who shows up a little later, has eerie innocence. Hamm is gleefully obnoxious. Bridges, while he’s done this sort of role before, is pitch-perfect.

BAD TIMES AT THE EL ROYALE has plentiful violence, but it feels a bit muted. Perhaps this is because certain plot strands don’t tie together; coincidence looms a little larger than is healthy for this sort of material. Still, we become invested in the outcome and actively root for some of the people, and that is an undeniable upside.