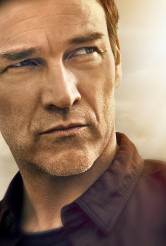 The actor talks playing a normal father of superpowered offspring 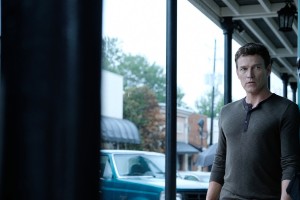 In Fox Network’s THE GIFTED, an original series developed by Matt Nix from Marvel Comics, the Strucker family is stricken with big trouble. Stephen Moyer plays Reed Strucker, a Texas lawyer who has been confidently prosecuting mutants who act up – until the day that his two children, Lauren (Natalie Alyn Lind) and Andy (Percy Hynes White), discover their own mutant powers and accidentally destroy their high school.

Reed and his wife/the kids’ mom Kate (Amy Acker) turn to the Mutant Underground for help. Reed gets shot in the back while trying to protect the family, then arrested and questioned by the anti-mutant Sentinel Services. He’s subsequently rescued, but the situation is still perilous.

This is hardly Moyer’s first go-round with a society full of characters who are viewed warily by the mainstream. He spent seven seasons as the vampire Bill Compton on HBO’s TRUE BLOOD (he also played a vampire in the British miniseries ULTRAVIOLET). Nor is it the English actor’s first time playing an American Southerner – besides Bill, he just portrayed a North Carolina police lieutenant in Fox’s miniseries SHOTS FIRED. Moyer has also recently been a regular in SAFE HOUSE and THE BASTARD EXECUTIONER, and appeared in the feature film CONCUSSION.

At a Q&A session held by Fox, Moyer talks about portraying Strucker. Later, at a party thrown by Fox at Soho House in West Hollywood, he replies to some one on one follow-up questions.

Moyer believes there’s a little bit of mutant in everyone. “I’ve got four kids, and I see them go into their little worlds, where they create stud and they completely just get enveloped in this thing that you can’t remove them from. And that’s fantastic to watch. I think as we go through life, we have some kids get drifted off into sports, or some kids become computer or game experts or whatever. But I think that ultimately, everybody has that imaginary world that they live in. I was into SPIDER-MAN. I didn’t do the X-MEN comic books [which are the basis for THE GIFTED], I was totally obsessed with SPIDER-MAN. But as you get older and you are able to look back at this stuff, it’s a way of tapping into that imagination that you had as a kid and what you’d be able to do if you could, [which is] the disenfranchised element of the X-MEN world. As somebody who’s been held back in some way, or pushed back by society in some way, I think, [that world] is very attractive to everyone in some way who feels that they’ve been blocked or stopped for getting further forward in their life in some way. So there is something in everybody to find some element that they can relate to within these stories.

“And what I love about this particular show and what we’re doing is that it’s more set in the ordinary than it is in a sort of a super-world, that these people are just trying to get by. They’re just trying to live in the world, in our world. In case it didn’t come across, it’s totally legal to be a mutant [in THE GIFTED world], as long as you don’t use your powers in public. And that’s one thing that I’m really excited about, is that we’re showing this parallel, a galaxy, but it’s not that far away. It’s a very, very close parallel to our own world, and I think people will really relate to that.”

To prepare for the job, Moyer availed himself of materials provided by Marvel. “We were not sat down and tied up and forced to do that. But obviously the films are open to us, and Marvel made the entire Marvel Unlimited app available to us so that we could go back and look at anything, which is a great resource. It’s almost like the iPad was invented for comic books, other than anything else, because the world just comes to life in that iPad app, and I really recommend you get it. I’m not getting any percentage from Marvel for this, by the way. So there’s this massive resource that we can all go down the rabbit hole in our own way, or not. It’s down to the individual actor, I think.”

Regarding the character of Reed Strucker, Moyer says, “I think Reed starts this journey believing that he’s doing the right thing. He’s doing his job, and he thinks that he’s enforcing this world view and doing it in the right way and for the good of society, but also for the good of the people who are unable to control their powers, and by removing them [from society], he’s doing the right thing. It’s not until he, obviously, sees from his own children that they’re going through this, and then he starts seeing other people who are equally gifted that he starts seeing how difficult it is for them to exist in society without being ostracized or abused in some way. And he starts questioning his own whole existence.”

As an actor playing an ordinary human, is Moyer looking at other characters thinking, “I wish I could play someone with superpowers,” or is he thinking, “This time, my superpower is my acting”?

Moyer laughs. “I’m really happy to be playing somebody who isn’t doing all of that. I don’t have to spend two hours in makeup having special ears put on, or wearing contact lenses. I just get to turn up. Also, myself and Amy are the characters that the audience gets to view the world through, through normal eyes. So it’s really nice to actually just be playing somebody who’s human.”

How is it playing someone who is very invested in being a parent? “Well, that’s a great thing to have to play. And it doesn’t hurt the fact that I was shooting in Atlanta, and I’m away from my family, so I’ve got some other kids to look after for a bit.”

The composition of THE GIFTED acting ensemble provided Moyer with a bit of a shock. “Unbelievably, I’m the oldest person in the cast. That is the first time that has ever happened to me. So I feel a sort of a slight weight upon my shoulders. I don’t know how I got to be the granddad. There was a point, I remember, where I was the baby. I was the baby for years and years and years, and then suddenly, this job happened where I was a dad, about fifteen years ago, and then suddenly, that’s what you become. So I don’t feel like that, but that is who I am.”

Moyer also recently made his feature film directing debut, THE PARTING GLASS, which he also produced. The film was written by Moyer’s TRUE BLOOD cast mate Denis O’Hare, based on an incident in O’Hare’s real life.

“It’s finished,” Moyer relates, “so we’re now going out to festivals and do the festival circuit. I’m very proud of it. It’s an amazing cast. Denis and I are super-close, and were onto that next chapter of, having made the film, we now have to get the film seen.”

What else has Moyer got going on? “There are a couple things. I’ve got a couple of shows as a producer, one in America at one of the big networks, and then one in England, with another big network, which we’re finalizing the contracts on. So very exciting for me to do as two projects that I developed with other creative partners. It’s nice – I love the idea that I’ll be able to do that in my off time.”

And what would Moyer most like people to know about THE GIFTED?

“I think that in a way it’s incredibly exciting, because it’s good, Fox are excited by it, the cast is fantastic and we’re working with extraordinary directors, and telling a story that I think is incredibly prescient [as it relates] to today’s society.”