The actress talks about the PBS series 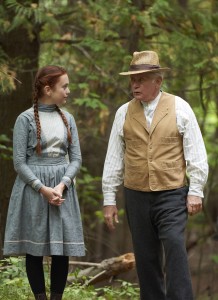 L.M. Montgomery’s novel ANNE OF GREEN GABLES has been a literary staple for all ages since it was first published in 1903. The book tells of 11-year-old orphan Anne Shirley and how her life opens up when she goes to live with the aging siblings Matthew and Marilla Cuthbert on their rural Canadian farm. The original ANNE and its sequels have been adapted for the screen many times.

Last year, PBS aired the latest version of ANNE OF GREEN GABLES, the first of a trilogy starring Ella Ballentine as Anne, Martin Sheen as Matthew and Sara Botsford as Marilla. The second installment of the trilogy, L.M. MONTGOMERY’S ANNE OF GREEN GABLES: THE GOOD STARS, airs on PBS on Thanksgiving Thursday as a holiday special. In this sequel, Anne is now age thirteen, still living on the farm and having adventures at school.

Canadian actress Ballentine has been acting professionally for the past seven years, with a series regular role in TIME TREMORS and gigs in feature and telefilms including BABY’S FIRST CHRISTMAS with Casper Van Dien and the recent release THE MONSTER.

ELLA BALLENTINE: It’s definitely like making three movies. It’s really fun, because it’s telling the same story, so coming back and seeing everyone [involved in all of the productions] was really great.

AX: Had you read the ANNE OF GREEN GABLES books before you got involved with this production?

BALLENTINE: Well, my mom read them to me when I was really, really young, and also, being from Canada, you just kind of know the story without having to read it [laughs].

AX: Is your Anne very similar or different to the Anne in the books?

BALLENTINE: Definitely very similar. We had Kate Macdonald Butler, who is the granddaughter of Lucy Montgomery, the writer of the [book] series – she was one of the producers for these films, and so she was always on set. She was always looking at what we were filming, and so everything was very true to the novels. John Kent Harrison, the director, made sure that I wasn’t watching any other versions or interpretations of the character, and it was just staying with the script and the books for reference, and any time I was confused about something, I would either ask him, or Kate, or both, and it was very collaborative on what we thought it was really like.

AX: What is Anne really like, in your opinion/experience?

BALLENTINE: Right [laughs]. Anne is very positive, very energetic and curious, imaginative, and you get that from any interpretation, but I think something that’s really great about this version is that you definitely see more of her past. In the first film, you got flashbacks on her time in the orphanage, and what it was like for her growing up, and so in the second film now, you can really understand how she became the person she is, and how her really rough and traumatizing experiences have shaped her into this wonderful young woman. She’s trying to become sensible and still stay imaginative, so I think she’s definitely a person who is like any other little girl trying to grow up and stay young at the same time.

AX: How old are you actually, and how old is she?

BALLENTINE: Well, when I filmed the second film, I was fifteen playing thirteen, so around the same age.

AX: Did you have to remind yourself what it was like to be thirteen, or is the period when ANNE OF GREEN GABLES takes place so different that it’s like playing somebody of another era anyway?

BALLENTINE: It’s a little bit of both. I find I relate a lot to Anne, in the sense of how she looks at the world and her experiences and how she’s very opinionated and talkative. So relating to her and trying to be her was very easy for me. But it was hard to have the energy like a thirteen-year-old does, because it’s definitely very different, they talk more upbeat, and use their body more [laughs]. The director had to keep telling me, “I need more energy, I need more energy!”

Relating to Anne could have been difficult because it’s a period piece, but my great-grandmother grew up in that time, so I definitely knew about stories and how things worked back then, so I could relate in some sense. She passed away not long ago. She was a hundred and two. But when she was still alive, right before I started filming ANNE OF GREEN GABLES, she told me many stories. She even had a slate from when she was in school. Anne uses a slate to bang Gilbert [her friend played by [Drew Haytaoglu] on the head [laughs], so many things she told me, I could find [comparable] moments in the film.

AX: Is there a key to playing Anne?

BALLENTINE: I think it’s definitely her feistiness and her temper, I think. Again, like me, she’s very opinionated, and she’s strong and she isn’t afraid to say what she thinks, which I think really makes her stand out, especially in the story and Avonlea, like it makes her stand out from all the other girls. Because definitely Diana is a very imaginative and creative person, but she’s traditional and she’s conservative, keeps to herself, and I think part of what attracts so many viewers to Anne is her feistiness.

AX: Had you worked with anybody before that you’re working with on ANNE OF GREEN GABLES?

BALLENTINE: I worked with Julia Lalonde, who plays Diana. We actually attended an acting class together before. So we knew each other somewhat, which was very cool.

AX: How familiar were you with Martin Sheen and/or Sara Botsford before you started working with them on ANNE OF GREEN GABLES?

BALLENTINE: I was somewhat familiar. I knew Martin from APOCALYPSE NOW, which is not something that I watched before, actually, but I worked with Laurence Fishburne before in STANDOFF. So I knew of the film, and definitely many people have told me how great a film it is, and so I was very nervous to meet him and work with him. And he actually doesn’t let me watch the movie. He won’t let me until I’m eighteen years old [laughs]. But both of them, you can tell, working with them, that they definitely have a lot of experience, and so I’ve learned a lot about how to be an actress.

I think from Martin, I’ve definitely learned to have fun on set. He’s definitely – not that I thought he would be very grumpy or anything like that, but I thought he would be much more serious on set, because he is so experienced. But quite the opposite – he’s the most funny and kind and joking guy I’ve ever worked with. The second he steps on set, he lights up the whole room. The energy totally shifts. He just sings at the top of his lungs and he dances in the middle of the room. So definitely to have fun with what I’m doing, and take it seriously, but to still have fun with it.

And Sara Botsford taught me a lot about questions to ask the director to get the response that you need as an actor, if that makes sense. And she’s really good about collaboration in the scene. She’s asked me, “What do you think your character is doing to get out of my character?” So it’s very interesting to work with her.

AX: Where did you shoot the ANNE OF GREEN GABLES trilogy?

BALLENTINE: We shot at a heritage farm in Middleton. That’s where Green Gables was set. And we also shot in a black pioneer village, which was really great to have church scenes.

BALLENTINE: Exactly. And then a bunch of exterior shots were filmed in PEI [Prince Edward Island].

BALLENTINE: It’s a trilogy of the first book in the series.

AX: If this trilogy is successful, might there be a trilogy of the next book?

AX: Has the first film aired in Canada?

AX: How was it received?

BALLENTINE: It’s been received very well. Actually, all three of them have already come out in Canada, and it went well. On Instagram and Twitter, people have been responding and messaging me. There are some people who watched other versions of it, and they’ve been saying, “I really liked this version as well,” and people who introduced their kids to it, the younger generations are also really responding well.

AX: How are you enjoying your visit to Los Angeles to promote ANNE OF GREEN GABLES?

BALLENTINE: It’s fun. I’ve never been to L.A. before, so this is really cool. I already went to [the shopping districts on] Rodeo Drive and Melrose. They’re really cool. I love vintage stuff.

AX: You’ve also done a couple of horror movies. Do you like that genre?

BALLENTINE: I really enjoy that, yeah. I worked on the film THE MONSTER, which was directed by Bryan Bertino, and it’s definitely the opposite of ANNE OF GREEN GABLES. I think that’s why I like it so much, because it’s definitely been diverse for my career, and it’s very dramatic, it’s not just horror. Because I’ve definitely been in things that are very creepy and supernatural, but this is definitely a film about relationships between mother and daughter, and so it’s just really cool to work on.

AX: Did you have to learn how to do anything either for that, in terms of running in the dark or screaming, or for ANNE in terms of walking in the clothing, or anything else?

BALLENTINE: Well, for ANNE, in the third film, Anne grows up, and so she wears corsets, so that was something I had to get used to, but also, in the first and second film, Anne has to work on the farm, so I had to learn how to milk a cow and feed chickens, which was really fun. And horror-wise, definitely working late hours, because in THE MONSTER, it’s all outside at nighttime, so my whole sleep schedule had to switch, and it was all the rain as well, so getting used to being soaking wet and freezing [laughs].

AX: With milking the cow, did you have a cooperative cow, or were you getting kicked?

BALLENTINE: Definitely the cow was quite shifty, I recall, but it kind of worked for the scene, because Anne wasn’t used to milking a cow. It was actually her first time as well. So I played with that in the scene, but it was really cool.

AX: And what would you most like people to know about ANNE OF GREEN GABLES?

BALLENTINE: I think it’s really important for people to watch ANNE because nowadays, with social media, and with the news, there are so many bad things going on and stressful things, and there are so many films out that are really, really great, they’re some of my favorites, but they’re definitely very dark. This is definitely a very happy and lighthearted film that you can watch with an all-age group and feel really good afterward.