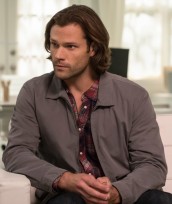 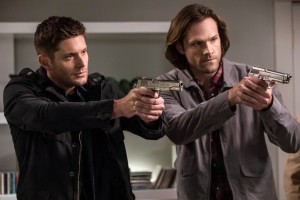 You learn something new almost every day, or in the case of SUPERNATURAL, almost every episode. In the case of Season 13 Episode 4’s “The Big Empty,” it’s where angels and demons go when they die. Castiel (Misha Collins) is wandering around this, well, big empty space, trying to find somebody, and eventually wakes up the Entity running the joint. The Entity looks exactly like Castiel, since revealing his true form (the Entity says) would cause Cass to go mad. We can easily tell the difference between Cass and the Entity, since the Entity is extremely persnickety. According to him, this vast nothingness existed even before God and Amara. Dead angels and demons come here and sleep an eternal sleep. The Entity has also slept, but Castiel being awake has somehow awakened him, and he doesn’t like it.

Castiel asks the Entity to send him back to Earth. The Entity makes some Lucifer-like objections – Castiel is a failure, yada yada yada, wouldn’t he like to just sleep peacefully – and then makes some threats. Castiel points out that if the Entity could actually knock the angel into the recesses of the Big Empty, he would have done it. So in the end, the Entity sends Castiel back to Earth, where Castiel awakens in a field, wearing his trusty trench coat.

Hey, it’s totally fine if SUPERNATURAL wants to keep Collins, and the boys sure can use him, but did they have to make up a super-duper-wuper powerful being? Granted, Collins is clearly having and providing fun in the role, and we probably will never see the Entity again (it’s not like he wants to make house calls or that Castiel would see him as a reliable resource), but this seems a bit of a reach, even by the outsized standards of this series. Oh, well.

Several people have been killed by their dead loved ones. After the guys ascertain ghosts are not responsible, they discover the victims have been going to the same grief counselor, Mia Vallens (Rukiya Bernard), who apparently has successfully been giving her clients emotional closure.

Posing as clients, Sam, Dean and Jack have a session with Mia. Sam and Dean get into it for real, with Dean saying that Sam is in denial over their mother’s death, and Sam finally yelling that Dean had a real relationship with Mom, who always called Dean when something was up. Why shouldn’t he hope that he’ll get to have that?

Mia is actually a shape-shifter, but she didn’t kill her clients. She has a bad past with a sadistic shape-shifter called Buddy (Niall Matter). Mia fled Buddy, changing her name and her lifestyle in the hopes of leaving the bad old days behind. Mia has helped people by appearing to them as whoever they’ve lost, allowing them to say proper goodbyes (the clients think it’s all some kind of hypnotherapy). Once Sam and Dean realize Mia’s alibi checks out, Sam goes to try to find Buddy. Alone with Mia, Jack asks her to “be” his mother Kelly (Courtney Ford), who he has seen only in the video message she left for him. Mia-as-Kelly tells Jack that it doesn’t matter if he’s a monster, all that matters is what he does, and she believes even monsters can do good.

Buddy of course attacks at Mia’s, knocking Dean out. Buddy wants Mia to shoot Dean and Jack. Jack recovers his missing mojo, knocks Buddy against a wall, and Sam returns in time to shoot Buddy.

Back at the bunker, Dean is able to tell Jack that he did good. Jack is delighted to have pleased Dean. When Sam finally wonders aloud if their Mom really is dead, Dean tells Sam not to say that. Sam needs to keep the faith, because Dean is all out of belief.

Since Sam and Dean aren’t sulking at each other, the yelling and arguing actually works well, it’s good to see Jack get his zap back and as for Dean’s faith, well, we look forward to the big reunion that is doubtless coming.