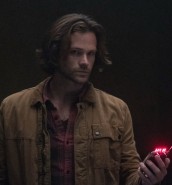 AKA The Resurrection Loophole Mambo 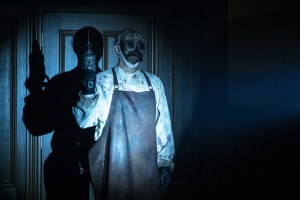 A big part of the charm of SUPERNATURAL is the craziness of its storytelling, which has just gotten loopier over the years. By Season 13, it revels in its own insanity. There may never have been a show where the ostensibly mortal lead characters keep dying and coming back, with the explanations for how and why this happens growing ever more complex. Anybody who wants to complain that this cheapens death, or sacrifice, or emotion, or the price of tea, is watching the wrong show.

This all brings us to the SUPERNATURAL Season 13 episode “Advanced Thanatology,” in which Dean Winchester (Jensen Ackles) has a chat with big-D Death, formerly the Reaper Billie (Lisa Berry). But wait, didn’t Dean’s brother Sam (Jared Padalecki) come to Dean’s rescue by killing Death (Julian Richings) at the end of Season 10? Yes, but it turns out that Death is not only an entity, it’s also a job title. Billie explains she’s been promoted from Reaper-hood and is now Death. But wait, didn’t Castiel (Misha Collins) kill Billie at the end of Season 12? Yes, but instead of going wherever deceased Reapers go, this actually put Billie on the promotion track.

Since had Billie vowed to Reap Dean on his next death and throw him into the Big Empty, from which nothing returns, it seems like Dean ought to stay dead this time, right? But wait …

Backing up a bit, we see teenaged friends Shawn (Seth Isaac Johnson) and Evan (Josh Hudniuk) exploring an abandoned house where mad Dr. Meadows (Sacha M. Romalo) performed lobotomies. The doc’s ghost shows up wearing a plague mask and wielding a drill. Shawn escapes, babbling about monsters. Sam gets wind of the case and soon he and Dean are on the road to Colorado.

Sam suggests they leave Lucifer’s son Jack (who we don’t see in this episode) behind to watch videos so that the Winchesters can have some brotherly time together. Sam also lets Dean drink beer for breakfast, buys chili fries and even suggests that they visit a strip club. All of this is so unlike Sam that Dean wonders what’s going on. Sam is being nice because he’s worried about Dean’s morale. Dean seems to be losing faith, which is very unlike him. Dean is questioning everything after losing Mom and Castiel.

Well, we know Mom is still alive is the alternate dimension and Castiel is on his way back from the Big Empty – so much for no one returning from there – but Dean is so far unaware.

Dean and Sam talk to the very upset Shawn. Dean tries to comfort Sean by explaining that, yes, monsters are real, but Dean and Sam get rid of them. Unfortunately, nobody realizes that Sean has taken a plague mask from the haunted house, which causes the mad doctor’s ghost to come for him at night. Sean’s distraught mother Penny (Alisen Down) doesn’t know where her son has gone.

Dean and Sam go to the haunted house, where they’re confronted by the doctor’s mask-wearing ghost. They burn the actual masks, which gets rid of Dr. Meadows’ ghost, but the house is still full of the ghosts of the doc’s victims. In order to find out how to get all of the spirits on to the next plane, Dean decides he’ll kill himself so he can be “on the other side” to talk to the ghosts. Sam can revive Dean in three minutes. Sam objects to this plan, but Dean stabs himself.

A moment here while we note that SUPERNATURAL may be the only show where the antidote for a fatal stabbing is a shot of adrenaline. Shouldn’t Dean have chemically stopped his heart, so that a chemical solution would seem vaguely related to the cause of death? On another series, this would be a valid question. Here, it’s like asking how many of Castiel’s angelic kin can do the Hava Nagilah on a knitting needle. In other words, never mind.

Dean encounters Shawn’s sad ghost – Meadows’ spirit possessed Shawn’s body and forced the youth to kill himself. Peppy Reaper Jessica (Kayla Stanton), who freaks when she realizes she’s talking to a Winchester. She gets Billie, who takes Dean to Death’s library, where there’s a whole shelf full of files about how Dean as an individual might die – but none of them say Dean dies today. As Death, Billie says she now sees the bigger picture, and that Dean and his brother are “important.” She sends Jessica to help all the souls, including Shawn, trapped in the doc’s house to move on to a better place. Dean gets sent back into his body before he can ask about Mom.

Dean doesn’t tell Sam about what happened with Billie. And then Dean’s phone rings. Guess who? Castiel. The boys go to pick him up and the episode ends before we get the big awestruck reunion.

SUPERNATURAL. Go with it, don’t go with it, it twists itself into Moebius strips to keep its regular characters on the air. It is completely bonkers, but if you do go with it, you get stuff that never happens anywhere else.