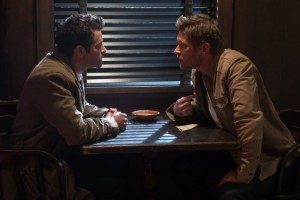 The SUPERNATURAL Season 13 episode “War of the Worlds” is not one to show to newbies, as it requires a lot of knowledge of what the hell (pun intended) is going on. In our world, powerful half-angel/half-human Jack (Alexander Calvert), worried that he might hurt his friends, has vanished to parts unknown. This leaves Sam (Jared Padalecki), Dean (Jensen Ackles) and especially Castiel (Misha Collins) in a panic, trying to find the youngster; while Jack looks like he’s in his late teens, he’s only been around for a week or so.

In the dimension beyond the rift, Jack’s dad Lucifer (Mark Pellegrino) is being tortured by that universe’s version of the Archangel Michael (Christian Keyes), who wants to get to our universe and rule it in God’s absence. Michael is assisted in this task by that dimension’s Prophet of the Lord Kevin Tran (Osric Chau), who’s still alive over there.

In Hell, Prince Asmodeus (Jeffrey Vincent Parise), who got zapped there by Jack, is still intent on befriending Lucifer’s heir. In the absence of God and Lucifer, Asmodeus also wants to rule Earth by proxy through Jack. So he’s got his demonic minions out searching as well. Asmodeus and Co. lethally interrogate a hotel desk clerk, whose only crime was working while Sam, Dean and Jack were renting a room there.

It might not kill someone to not know who Kevin is in the scheme of things (although most of us who do are happy to see him again), but if you don’t know about the Rift, and Jack, and Lucifer, and Princes of Hell and so on, “War of the Worlds” could be mighty confusing even ten minutes in.

Castiel thinks he has a lead, but insists on following it by himself. With nothing better to do, Dean and Sam look into a case of murdered witches – and are appalled to see the hateful and ostensibly dead British Man of Letters Arthur Ketch (David Haydn-Jones) seems to be the culprit. Whoever he is, he keeps asking about the deceased witch Rowena MacLeod.

With the help of a scared witch who was tortured by Ketch, the Winchesters set a successful trap – and catch a guy who insists that he is Arthur’s twin brother Alexander. He says he went through some of the British Men of Letters training, but ran away before the kill-or-be-killed final exam and is now a mercenary Hunter. Sam does some digging, finds evidence of Alexander Ketch and is prepared to believe the story; Dean thinks Arthur has somehow survived and is faking it. 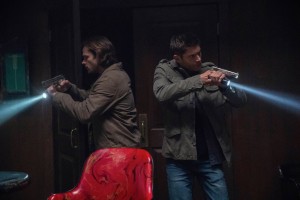 In the alternate dimension, Michael has promised to bring along Kevin if Kevin can open a portal to “Paradise World” (aka our dimension). Kevin drains a lot of Lucifer’s angelic grace to get a rift to open. The passage is up just long enough for Lucifer to escape and throw himself through it. Lucifer winds up in an American city, but, lacking grace, doesn’t have his powers.

Castiel meets up with the angel Duma (Erica Cerra), who says that if the angels had Jack, they’d put him to work making more of them. Jack may be the only entity besides God who can make angels, something that hasn’t happened in eons, and the angelic host has been decimated by recent events. When Castiel refuses to help, two other angels show up to try to force the issue – and then Lucifer arrives on the scene. He knows he doesn’t have powers, we know he doesn’t have powers, but the angels don’t know that, so they flee. Castiel is surprised that Lucifer is in this dimension, Lucifer is surprised that Castiel is alive (seeing that Lucifer killed him last season), but all that can wait. Lucifer tells Castiel a threat to the existence of everything on Earth is coming – Lucifer cares because he is here, and hence among the endangered. He also wants to know where his son is, and realizes that Cass has no idea.

Let’s just take a moment to say, again, that Pellegrino is a phenomenal asset. His regular-guy Lucifer is awesomely easy, loose and relaxed. He’s sure of who he is and he makes us sure as well. SUPERNATURAL often knocks it out of the park with the star angels and demons – Rob Benedict’s Chuck (also known as God) and Archangel Gabriel, played by this episode’s director Richard Speight Jr., are examples that come to mind – but Pellegrino is surely among the best.

Dean and Sam get a call about the missing hotel clerk. They also get a call from Cass, who is at a bar with Lucifer. Cass cuts it short when Lucifer gets too close. The boys lock up Ketch in the bunker, then track Cass’ cell. However, Asmodeus gets there first. He zaps Castiel and Lucifer into cells in Hell, then leaves a bunch of demons to greet the Winchesters when they arrive.

Sam and Dean do a pretty good job of battling the demons, but one gets the drop on Dean – and the demon is blown away by Ketch. How did Ketch escape the bunker? Well, the boys didn’t do a cavity search. It turns out that, indeed, this is Arthur – there is no Alexander. It turns out Rowena MacLeod may not be as dead as she seemed, even though Lucifer pretty thoroughly tore her apart. Ketch explains that Rowena had a charm within her body that resurrected her in the event of death. When the Men of Letters got hold of her, Ketch helped her escape in exchange for her installing a similar charm in his body. This is how he survived being shot in the head by Mary Winchester. Ketch invented the Alexander identity after coming back to life, since the Men of Letters would kill him if they found him. But the charm needs replenishing, which is why Ketch is now searching for Rowena. Dean is perfectly ready to see if he can kill Ketch permanently, but Ketch vanishes before Dean can fire his gun.

And it turns out that Ketch is now in league with Asmodeus. Haydn-Jones has an intriguing way of combining suavity with desperation and psychosis, so it’s nice to see him back in the fold as well.

“War of the Worlds” covers a lot of set-up ground in an entertaining way, and sets up, within SUPERNATURAL logic, paths to bringing back some good baddies.