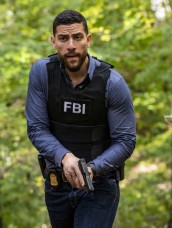 The actor discusses playing a character that was tailored to him 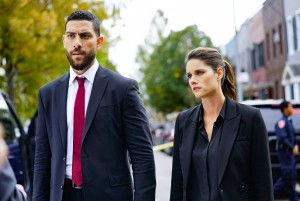 CBS’s new Tuesday-night series FBI is the most-watched new network show of the fall season. As its title suggests, the series from executive producer Dick Wolf deals with the U.S. Federal Bureau of Investigation, specifically agents operating out of New York City, looking into terrorism, gang activity, interstate crimes and other matters that are the province of the FBI.

Zeeko Zaki plays Special Agent Omar Adom “OA” Zidan, who is partnered with Missy Peregrym’s Special Agent Maggie Bell. Bell is has been at the Bureau for a long time, while Zidan has joined after a long stint in the U.S. military. The two agents are still getting to know one another, but work together well.

Zaki has had roles in both films and TV, including STUCK IN LOVE, ALLEGIANT, SIX, 24: LEGACY, NCIS: LOS ANGELES, and VALOR. The actor has changed his look over his career, having shed a hundred pounds over the past eight years. An American of Egyptian heritage, Zaki says he is keenly aware of the show’s balance of showing Arabs and Arab-Americans – including his character – in a positive light with episodes involving FBI investigations into cases involving Middle Eastern-based perpetrators.

ZEEKO ZAKI: Between all of the reputations that we’re representing inside of this show, from the Bureau to religion to Arab-Americans to women inside, the diversity, there’s a lot that we’re showing up for. Yeah, there’s pressure, but also, it’s like coming into a show Season 70 with Wolf Films [although FBI is in its first season, executive producer Dick Wolf has brought forth the LAW & ORDER and CHICAGO FIRE franchises]. They’re a well-oiled machine, and I am so grateful for that, because this is my first lead. So it’s nice.

ASSIGNMENT X: Have you ever seen anything of the FBI in the real world?

ZAKI: Actually, yeah. When 9/11 happened, my family is from Egypt, and I think a lot of people from our side of the world got their doors knocked on, and questions asked. Which isn’t a bad thing. When we go to TCA, and my cousin’s a pilot, and he did a trip one time, and he hit I think five countries, all the way to get back to work. And by the end, his bag was completely destroyed [from being] searched. And we were like, he was like, “You know what? Good.” His name is Omar Morsi. That’s fine. That means they’re looking into stuff, which is reassuring. So with all that kind of stuff, my family has always been okay with it, we understand that it’s a necessary evil, but I think recently it gets in the mindset that not everybody is able to detach that, and they start turning it into, “All Muslims are this, or all Muslims are that.” And that’s what I’m hoping that we get to shift, if maybe I can make a relationship onscreen with some people in the country.

AX: The FBI investigates hate crimes, right? That is part of their jurisdiction?

AX: Do you think there may be episodes dealing with anti-Muslim hate crimes in the first season?

ZAKI: Well, all I know is that they are really lining up, sensitively lining up, with what is happening inside the FBI. So I think that we’re going to see a little bit of everything, and I think that’s going to be an exciting thing to get into, because again, that’s why we’re getting this diverse cast, and going into that, to show these people that everybody is American, and it doesn’t matter what suffix or prefix or anything that comes before that, so that’s what we’re trying to definitely show.

AX: Were you a TV procedural fan before you got involved with FBI?

ZAKI: I’ve always been a procedural fan, because of the idea that they’re all movies. Every episode that we get is a movie, every episode you watch, you don’t have to pick up. I love that, because my dad, he doesn’t have to watch the entire series, he can just pick up an episode and get into it, and I think that’s really exciting, because we get to Episode 1 – bombing, MS-13. Then maybe there’s a hate crime, and with every new episode, we get to research new things, question new suspects, get new background information, so that’s exciting, because it’s not just one storyline.

AX: If this isn’t too personal to discuss, how difficult was your weight loss?

ZAKI: I’m six-five. I was three hundred and twenty-five pounds, and now I’m two hundred and twenty-five pounds. It wasn’t about it being difficult, it was just about making that decision, and that shift, and realizing that I felt if I could reach my potential in everything, physical, mental, all of that, that it would just karma-wise drive me to a place of quote-unquote success. It happens immediately, and it happens widely. You go to the gym one day, or you read one book, or you do one nice thing, you feel a little bit better, and things start coming to you. So with a karma-based lifestyle, it was just like, “How do we become better each day? How do we become healthier each day?” And it started to show up in work. And I was like, “Wait. Everyone always dreams of getting paid to work out. Then they’ll do it.” And I told myself, “You know what? If I work out, and I can get to a place of playing these big roles – everyone wants to play a superhero – and I am getting paid to work out.” And here we are, and it feels like that kind of is what happened. I decided, if you lose it quick, it’s going to come back quick. So I tried to do it in a way that was sustainable. I got one tip, and it’s my favorite tip, it came from Tim Farris Four Hour Body – thirty grams of protein within thirty minutes of waking up. If you start your day perfect, you’re going to be more inclined to keep that going. You started the day perfect, you’re at lunch, you’re like, “Well, might as well go for the salad,” and then it’s going to trickle down. It’s just little things, you take one step in the right direction.

AX: Has it changed the types of roles you get offered?

ZAKI: Every year, I’ve been a different actor and a different person physically, and it’s been very interesting to me, because people will be the same person physically for maybe ten years at a time, the same headshot, yada, yada – I’m getting a different headshot every year. When I started acting, I couldn’t necessarily play an NFL football player, and now I can. And that was to me like just awesome.

AX: Back to FBI, is it true they rewrote the character for you?

ZAKI: My manager just sent me the audition. It wasn’t really requested, because they were looking in the Latino genre, and so when I went in, I was like, “Just throw it away. Go for it.” And then we got into the room, they started asking me about Egypt, and how this would change for me if I went back to Egypt, and I was like, “Maybe I’ll need less security if everyone thinks I’m in the FBI.” [laughs] And so I left the room, and they called my manager, and they said, “We really like him. We want to see him in New York, put him on the SVU set, see how it goes for a screen test.” And they wanted me to fight the text, because I went in super-dark. He’s coming from [fighting] cartels. That’s devastating. So I went in dark. And “We’ve got to find it, we’ve got to find it.” And then boom. I get the new script for the test, and the first line’s Arabic, and the second line’s a joke, and we kind of took a step back, like, “All right. I think …” Because I was sitting there going, “Take this chance. It’s time.” It’s funny, because coming into it, I’m like, “How do we find that levity with the character?” Because meeting these guys, they deal with this stuff every day. So, me coming in new to it, it’s heavy, but I have to find that balance, and we’re definitely working up to that.

AX: So how does it feel to be playing not only your first series lead, but one that’s been specifically tailored to you?

ZAKI: It’s a dream. Being able to ask yourself what you would do, instead of having to ask somebody else, and rely on your own instincts, is something that is, as an actor, what you’ve always wanted to be. I would love to play this role for as long as possible, and they gave me that chance, and we’re starting to put things about me in there, like the religion, and just personality-wise, and the weight loss. You’ll see.

This interview was conducted during CBS’s portion of the summer 2018 Television Critics Association (TCA) press tour.