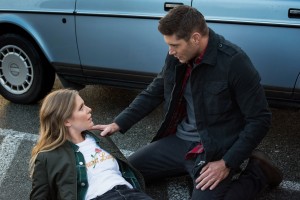 Two witchy sisters have a routine: they put a love spell on an unsuspecting man, get the poor schmoe to steal, kill and/or whatever for them, then off the guy in a non-supernatural manner so as not to alert Hunters.

However, when they set a trap for Dean Winchester (Jensen Ackles), the witches clearly know they’re facing a Hunter. This doesn’t protect Dean in the least from the love spell – he is instantly smitten with Jamie (Jordan Claire Robbins), and wants to set Sam (Jared Padalecki) up with her sister, Jennie (Shane Dean).

Dean meets the witches while on a beer run, having left Sam behind researching spell books back at the Men of Letters headquarters. Sam is trying to find something that can help them reach Jack in the alternate universe, where the young Nephilim has landed.

Neither Sam nor Dean knows that their angel friend/Jack’s father figure Castiel (Misha Collins) has been imprisoned in Hell by the demon Asmodeus. Cass is in the cell right next to the one containing Jack’s birth father, the currently powerless Lucifer (Mark Pellegrino). Lucifer is trying to talk Castiel into giving him some angelic grace; Castiel is enjoying taunting Lucifer.

Sam realizes from Dean’s bizarre behavior that something is up, even before Dean declares that he’s going to give Jamie the huge grimoire spell book that she requested. Sam takes Dean’s car keys, so Dean decks Sam and heads to meet up with Jamie on foot.

Sam gets there in time to stop Jamie from killing Dean, who is still love-struck. The two young witches drive off with the spell book as Sam and Dean slug it out in a parking lot. The fight is broken up by centuries-old witch Rowena (Ruth Connell), who also takes the spell off Dean.

We might ask – as Sam and Dean do – how is Rowena alive? After all, they were told by Lucifer (and we saw last season) that he caved Rowena’s skull in and then burned her. However, as British Man of Letters Ketch previously noted, Rowena has a built-in resurrection spell. This turns out to be the case. It’s taken Rowena this long to heal. She’d rather not go through any of this again, and she needs a protection spell for when (not if) Lucifer returns.

It’s no coincidence Rowena turned up when she did – she had put a tracking spell on the book and felt it moving. Although the guys don’t trust Rowena any more than usual, nobody really wants to find out what the young witches want with the book, so the Winchesters and the Scottish witch team up to locate the tome.

There’s also a moment when Rowena asks what happened to her son Fergus, aka Crowley. She is shocked and clearly upset to hear that he died saving Sam and Dean. She says this doesn’t sound like Fergus. Sam explains that Fergus/Crowley had changed a lot. He might have comforted Rowena by putting it in terms she could understand, and that might be the truth anyway – with no way out, Crowley decided to stick it to Lucifer one last time. Oh, well.

Jamie and Jennie want to use a spell to bring back their dead mother, even though they can’t really read the book. They sacrifice a young man, but it doesn’t go exactly the way they thought it would … 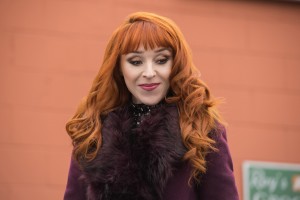 Dean and Sam track down the sisters’ address, courtesy of a helpful store clerk who hates the two witches for their admittedly awful rudeness. Dean goes into the witches’ house to retrieve the book, leaving Sam in the car to watch Rowena

To which we say, good going, Dean, yes, do that by yourself, because that usually works out great. Sam deduces that Rowena is actually frightened. The two of them commiserate over having seen Lucifer’s terrifying true face, which has haunted both of them ever since.

Of course, Rowena’s empathy doesn’t extend to actual honesty. She puts a spell on Sam so that he can’t follow her, then goes into the witches’ house. Rowena had made a deal with Jamie and Jennie so that they’d get the book for her in exchange for her help resurrecting their mom. Mom has come back, but as a zombie, who is busy trying to eat Dean. The two young witches demonstrate their awful rudeness to Rowena. Sam gets out from Rowena’s spell in time to help. The upshot, as we expect, is that the witch sisters wind up dead, undead mom with winds up completely dead, and Sam and Dean get the book back.

Dean discovers after Rowena leaves that Sam has actually allowed her to take the page with the spell she wanted. Sam tries to explain that he understand Rowena’s fears. Dean doesn’t fully get it, but he assures Sam that they’re going to find their mother and Jack.

Meanwhile, it turns out that Rowena is right to be concerned about Lucifer. Castiel’s taunts about what a great kid Jack is, even instinctually resurrecting Cass (after Lucifer killed him), finally get Lucifer so angry that some of Luci’s juice comes back. Lucifer and Castiel break out of Hell and wind up back on Earth. Lucifer wants Castiel to donate some of his grace. Castiel doesn’t trust Lucifer. When Lucifer tries to take the grace by force, Castiel stabs Lucifer.

Alone, Rowena works the spell. It seems to do a little bit more than protect her, as her eyes start glowing purple.

“Various & Sundry Villains” is enjoyable enough. It’s fun to see Rowena again, even if she still sort of seems to have wandered in from BEWITCHED. There’s just enough of Dean being starry-eyed and goofy to be funny without the gag overstaying its welcome, and Castiel and Lucifer together are a hoot. The balance of standalone and seasonal arc feels right. Finally, it’s nice for Dean to get to be the “it’s all going to work out, the work pays off” cheerleader for a change.