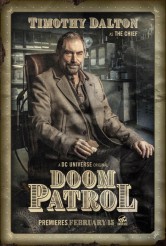 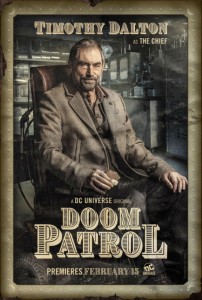 DOOM PATROL is one of the new DC Universe streaming services premiere original live-action series (the other is TEEN TITANS). New episodes arriving on Fridays. In DOOM PATROL, Timothy Dalton’s character Niles Caulder, aka the Chief, cares for a group of individuals (played by actors who include Matt Bomer, Brendan Fraser, Diane Guerrero, and April Bowlby) who have powers that don’t quite make them super. They square off against the vengeful Eric Morden, aka Mr. Nobody (Alan Tudyk).

Over his extensive career, Dalton, originally from Wales, has portrayed a wide variety of characters on stage, screen and film. He’s played James Bond twice and more recently starred in three seasons of PENNY DREADFUL as Sir Malcolm Murray, who, like the Chief, also kept company with some powerful antiheroes.

ASSIGNMENT X: Is Niles Caulder the leader of the Doom Patrol? The others call him “Chief” …

TIMOTHY DALTON: They call him the Chief, yeah. I suppose, yes. He’s looked after them. They’re just a group of very complex individuals, very self-destructive, and very vulnerable, but we’re all coming together into my domain, as it were. I look after them, I’m a father figure to them, and a mentor, maybe.

AX: Do you think the Chief’s paternal aspect towards all of these people is selfless? Is he making up for what he did to Mr. Nobody? Does he have some sort of agenda we’ll find out about?

AX: And what is your adversarial relationship like with Mr. Nobody?

DALTON: Ah, well, there you’ve got to go back a long time in time. I did a terrible thing to him – [laughs] depends how you look at it. Anyway, he is an absolute enemy, an absolute enemy. He’s after me for revenge, and he won’t stop.

AX: Is the Chief comparable to anybody else you’ve played?

AX: What’s unique about him for you?

AX: How much do you need the producers to tell you in advance where your character is going?

DALTON: I think you need to know some things. You certainly need some parameters. I would certainly say that would be the case. So I do have certain parameters that I know are within the character of the man. But someone else might say, “No, no, no, you could just play the scene, play it as it is, because all the scenes are structured so it’ll all work out in the end as we want it to work out in the end.” But no, you should know what’s happening. And we have a wonderful show runner, Jeremy Carver, who has got a fantastic emotional and intellectual grip on the story, and is terrific to work with.

AX: Do you have a favorite phase of playing the Chief so far – when he’s upset, when he’s happy …?

AX: Were you familiar with any DC Comics before DOOM PATROL?

DALTON: None whatsoever. I’ve seen some of the movies, yes, but I’m not a fan of comics. I’m a fan of working, and working with good, imaginative, talented people. That’s what we have.

AX: Do you like the sort of heightened characters or heightened stories that you get with this genre?

DALTON: Put it like this: when I read it [DOOM PATROL], I’d never read anything like it ever before. It’s completely, sanely insane, and wonderful, and hugely imaginative. It’s based on a cartoon. I say “cartoon,” you will probably say “comic.” You fit the style into what you’re doing, really, but it is people. It’s people, not pictures.

AX: How is it dealing with characters who are going to be replaced with great chunks of CGI in post-production?

AX: Well, Elasti-Woman when she becomes a blob …

AX: What about Robotman? Brendan Fraser plays him when he’s normal human Cliff Steele, but …

DALTON: We have an unsung hero playing Robot Man, Riley Shanahan, who [plays the character physically on set] when the mask is on. Brendan does it when the mask is off. Brendan of course revoices it. So I am working with people. And even Mr. Nobody, I worked with [Alan Tudyk]. I mean, he’s wearing a rather silly skin-tight ballet suit [laughs], but that’s because they’ve made a thing they can put all the stuff on top of, the CGI.

AX: Do you have to have any CGI applied to you at any point?

AX: Do you take a look round and take in the absurd elements and laugh once and that’s it, or do you ever find yourself going, “This is the strangest-looking thing I’ve ever seen”?

DALTON: Well, it is pretty much the strangest-looking thing I’ve ever seen that we’re doing, but when you’re doing it, we have scenes to play, relationships to create, vulnerabilities to expose, so it’s just like playing a scene anywhere, with anybody, in rather bizarre surroundings sometimes.

AX: Where are you shooting DOOM PATROL?

DALTON: In Atlanta. In a place called Conyers, mostly, outside Atlanta.

AX: Had you worked there before?

AX: How was working in Atlanta?

DALTON: Well, Atlanta’s a fine city. But when you’re away from everything you know, and your own home, for much more than a couple of months, it becomes a bit desolate.

AX: DOOM PATROL is one of the flagships of the new DC Universe streaming service. Is there any particular pressure involved with being part of that launch?

DALTON: No. But that is not in the sense that it doesn’t matter. There’s no more nor any less than any piece of work you do. You want it to be successful, and you work very hard to make it successful.

AX: At this point, do you care where the work is airing, if it’s streaming or television or film?

DALTON: Well, I obviously would like it to be seen by the largest audience possible. But as I’m not in charge of that, I leave it to other people. It’s in other hands. But yes, of course, I’d like it to be a great success, and I’d like lots and lots of people to watch it.

AX: To ask an off-DOOM-PATROL-topic question, were you happy with how PENNY DREADFUL wrapped up at the end of three seasons?

DALTON: Well, the story ended. I know a lot of people didn’t think so, and there was a lot of sadness that it did end. It really rather shocked me how people can fool themselves. I used to look occasionally on the Internet, and because there was a sort of a leader, and a group of disparate people, everyone started talking about THE LEAGUE OF EXTRAORDINARY GENTLEMEN, thinking that it was this team of people that were going out and solving the world’s problems and fighting evil and all that, and that was absolutely nothing to do with it. Those characters were only introduced in Episode 1 because they were the characters that were going to be followed throughout the series, not because they were going to league of whatever it was.

AX: Well, there’s some overlap in the characters between PENNY DREADFUL and LEAGUE …

DALTON: Yeah, a little bit. But the real story was about this young woman [Vanessa Ives, played by Eva Green] who, because she saw her mother having intercourse with a man [Dalton’s Sir Malcolm Murray] that wasn’t her father, in fact, a man that she probably idolized, and found it erotic, thought it was evil, and could never have an orgasm without thinking she’d been taken by the Devil, an incubus. And when she therefore can’t be cured, and loses her life, the main thrust of the story is over. And that’s what happened. I am not saying it wasn’t because of other reasons as well, but that was the main reason.

AX: And what would you most like people to know about DOOM PATROL right now?

DALTON: Well, I’d like to know what they think about it. I’d like to hear how people feel about it. To tell them, I would just say, if an audience feels like I felt when I read it, they’re in for a huge surprise, and I hope they like that surprise.

This interview was conducted during DC Universe’s portion of the Winter 2019 Television Critics Association press tour.