SUPERNATURAL does HOSTEL (kind of) 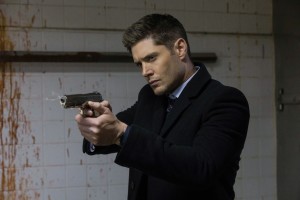 SUPERNATURAL likes to occasionally riff on particular horror movies. The Season 13 episode “Breakdown” is, more or less, SUPERNATURAL’s take on HOSTEL. Hang on, this is still The CW – the ickiness is intense in broadcast TV terms, but it still is broadcast TV. Instead of (as in HOSTEL) guests at an Eastern European cheap hotel being kidnapped and auctioned off to homicidal maniacs, here it’s stray people on the byways of America being kidnapped and having their parts auctioned off.

Some guy in Oshkosh, Nebraska is keeping track of missing persons and doing bad things to people in his huge trailer truck. Then Wendy Hanscum (Sarah Dugdale), niece of Winchester friend Sheriff Donna Hanscum (Briana Buckmaster), stops for gas at a small truck stop. Said guy uses a small item to puncture and create a slow leak in Wendy’s tire. This causes the “Breakdown” of the title and our perp kidnaps Wendy. The perp, wearing a flesh mask and goggles, terrorizes Wendy and takes video of her, apparently naked (the framing is discreet).

Sam can’t sleep, though Dean is chipper. Then Donna calls, distraught that her niece is missing. Her friend Jody can’t help (well, that was quick), and Donna’s sorry to call, seeing that this doesn’t seem to be the boys’ normal thing (i.e., supernatural). No problem, Dean and Sam are there in a jiff. Dean promptly gets grief from Agent Clegg (Chris William Martin) of the FBI, who is investigating the case. Dean backs down, says he’s Wendy’s family. This is news to Officer Doug Stover (Brendan Taylor), who still has a crush on Donna from back when we met him in the 2015 episode “Plush.”

Alone in their hotel room, Sam chastises Dean for using a CB radio to try to get information from truckers. Sam is also worried that maybe it’s not great to pretend to be Feds with a real FBI agent around. Dean gives Sam a “cheer up” speech, since Sam has been moping (hey, with Jack missing, somebody’s gotta do it, right?) about Jack and Mom.  Then a female trucker gets on the horn with Dean and says she has info.

Agent Clegg has been chasing the serial kidnapper he calls “the Butterfly” for years. All of Butterfly’s victims have disappeared without a trace. Clegg has a few suspects, but he’s never gotten any proof until now. However, Pastor Hankey (Troy Skog) was found with one of Wendy’s t-shirts in his possession. Donna does a great job of questioning the pastor but, while he is a scumbag, he’s not the Butterfly.

Meanwhile, the female trucker directs Dean to the truck stop. Dean brings Doug with him. Truck stop proprietor Marlon (Steven Yaffee) – after Dean pounds his head into the counter a few times, uses his computer to show Dean and Doug what’s going on. They tune into the live video feed right as bidding is happening for some poor guy’s arm, which is severed as the winning bid registers. We and Dean should now question why Marlon would admit to knowing anything about this to an apparent FBI agent – seems like he’d be better off getting his face pounded to a pulp – but in any case, Dean summons Sam and Donna.

Sam and Dean figure out that the body parts are being bought by monsters as food. Marlon admits to contacting the website proprietor whenever he sees a customer who’s unlikely to be missed. This doesn’t quite jibe with what we were told earlier about nobody else going missing from the truck stop. Again, this isn’t a mistake in the writing, but events are going quickly.

The website feed now shows a terrified Wendy. Dean estimates they’ve got fifty minutes to rescue her, but Marlon claims he doesn’t know where the slaughterhouse is, and Sam doesn’t have the skills to hack the website’s IP in time. The real FBI can do it, though. With no other options, they contact Agent Clegg to get an address. Donna gives Doug the short version of the truth about monsters and Hunters.

Arriving at the location Clegg designated, Dean and Donna go one way, Sam goes another, and Doug is left to guard Marlon, who has been brought along because he can’t be trusted. Several surprises ensue. 1) Marlon is a vampire, who bites Doug. 2) Dean and Donna follow sounds – and find they’ve been lured to an empty building. 3) Clegg arrives, startling Sam. Clegg plausibly says that if they’ve got a lead on the Butterfly, he’s not going to just provide an address and not show up, but then he knocks Sam out.

Hey, by process of elimination, it had to be Clegg, right? They’ve eliminated all other suspects (unless it was going to turn out to be Doug, but that would really be a stretch). A mystery where the unsub is truly unknown is usually no fun, and SUPERNATURAL knows that. This also explains Marlon’s easy willingness to reveal the website and why Clegg claimed he didn’t know of any other disappearances from the truck stop. 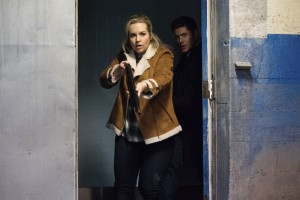 Dean and Donna hear the fracas with Doug and Marlon. Doug turns fast and tries to attack Donna, but Dean knocks him out with an injection of dead man’s blood. So long as Doug doesn’t feed, he can be cured by drinking the blood of the vamp that turned him. Marlon, very cocky, tells Dean and Donna that Clegg is the killer, and that he has Sam. Donna shoots Marlon with a vampire-crippling bullet (she does Hunt sometimes, after all). Dean gets Marlon’s blood, while Donna threatens Marlon with a painful death (she’ll kill him either way) if he doesn’t reveal Clegg’s real location.

Clegg isn’t the butcher after all – he’s just working with the butcher. Clegg has Sam tied to the “operating table.” Clegg explains that there are many, many more monsters than Sam and Dean know about. The ones the Winchesters hunt are the monsters that are too mean, too stupid or both to pass as human. Most monsters can pass. Clegg sees himself as providing a service that keeps those monsters from getting too hungry and hunting in the general population. And then he starts to auction off Sam.

In the car, Donna gets Doug to drink Marlon’s blood. Doug is left handcuffed in the car while Dean and Donna go to the actual lair. Donna rescues Wendy and kills the butcher. Clegg auctions off Sam’s heart for $500,000 – Sam is a Winchester, after all. Normally, the butchering process is drawn out to make the victims suffer, but Clegg wants to be done before Dean shows up, so he pulls out a pistol, preparing to blow Sam’s brains out. Instead, Dean shoots Clegg before any harm can come to Sam.

In a motel room, Doug has un-vamped. He asks about Wendy; Donna says Wendy is just fine and in the hospital. Dean congratulates Doug on having been helpful and says they can always use a new teammate. However, Doug is so shaken by the experience that he wants nothing to do with monsters. Doug tells Donna that he loves her and that she’s a hero, but this isn’t for him, and he leaves. Sam stops Donna from going after Doug, giving her the well-honed speech about how being a Hunter is a solitary life and, well, if you watch SUPERNATURAL, you’ve heard it before.

It’s malarkey, by the way – Donna has Sam and Dean and Jody and Jody’s girls. That’s hardly solitude. But Sam is determined to mope. In the car with Dean, Sam goes on a rant about how he wanted to believe that they could get Castiel and Jack and Mom back, but that was a fantasy, and they’re going to have a bloody end …

Okay, it’s SUPERNATURAL, apparently, somebody has got to be sulking all the time, but, really, Sam? This review is not going to try to count all the times they’ve lost Castiel and then gotten him back again. Right now, he’s just missing – we know he’s stuck in Hell, but for all Sam and Dean know, Castiel is still out searching for Jack. They now know that Mom is alive, and in a realm that people can return from. As for how it’s all going to end badly, um, Sam, you and Dean have died and been to Hell, Heaven and a Japanese game show. But maybe “Breakdown” refers to the one you are apparently on the verge of experiencing.

“Breakdown” gets points for its little plot twists and for expanding the universe a bit (all those monsters passing as human). It also is nice to see a character like Doug, who absolutely can’t cope with the Winchesters’ world, and the stylistic tip of the hat to HOSTEL is done well. Overall, it’s a decent quasi-standalone that takes what it needs from SUPERNATURAL established lore to tell its story.