The actors chat about their Fox sci-fi series 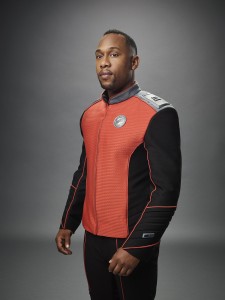 THE ORVILLE is now boldly orbiting Thursday nights on Fox Network in its second season. Created by Seth MacFarlane (who also executive produces and stars as Captain Ed Mercer), THE ORVILLE chronicles the adventures of the title spaceship and her interspecies crew.

Two of THE ORVILLE’s cast are hanging out together, as their characters sometimes do. Mark Jackson plays Isaac, an artificial life form from another world, and J. Lee portrays John LaMarr, one of the ship’s pilots. Lee, originally from St. Louis, Missouri, has done voice acting on some of MacFarlane’s animated series, including FAMILY GUY, AMERICAN DAD, and THE CLEVELAND SHOW. Jackson, born in the Netherlands and raised in England, has worked primarily in the U.K. until now.

ASSIGNMENT X: The Orville actually has two pilots, correct? The other one is played by Scott Grimes …

J LEE: Exactly. I’m the navigator/pilot, and Scott Grimes plays Gordon. We’re at the front of the ship, and we have a brotherly, goofy, funny relationship. We’re always cracking jokes.

AX: Do you guys switch off who’s navigating and flying from episode to episode, like Mr. Sulu/Mr. Chekov on STAR TREK?

LEE: Scott plays Seth’s best friend, so when Seth’s character Ed gets the ship, he brings on Gordon. I was already a part of the ship when they get there. So how it’s written is, Gordon and John have a competitive, “let’s see what you can do” relationship, but then they very quickly become best friends and sort of goof off in the front of the ship.

LEE: Exactly. Like the same side of the same coin. 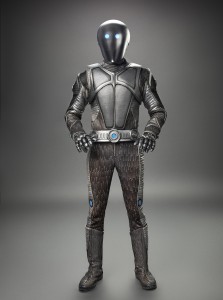 AX: What is Isaac’s position on the ship?

JACKSON: Isaac is definitely an outsider. He’s an artificial life form, he comes from Kalon – other people would call him a robot. He’s not, because he’s got some strange life form inside him. He’s very alien. He’s a very logical person. He operates in a very scientific way, which is obviously a very un-human way, and un-most of the aliens that are aboard The Orville. The nice thing about him is, all the problems and all the fun and all the drama that goes on on the ship bounces off him. And that’s the interesting thing about him. He is this sort of sounding board.

AX: Are you voicing the character and wearing that robotic-looking suit?

JACKSON: I am, yes. I am fully Isaac.

LEE: Mark does an amazing job of giving physicality to Isaac, so when he puts the suit on, Isaac has his own rhythm and body control and body chanisms. That’s because Mark is a dope actor.

JACKSON: I think it’s interesting. You put a suit on like that, you can’t help but let the suit inform what you’re doing. The nice thing about Isaac is, his suit is so well-made – the gloves are particularly beautiful – Howard Berger, Oscar-winning makeup artist, who’s working on the show, has made these gloves, and made everything, really. And half the work is done for you. You put it on and you lose the inhibitions of being an actor with a face, and an actor with a recognizable human body, and you have a lot of fun.

AX: Do you have to do automated dialogue replacement – that is, ADR – for all of your dialogue, or are they able to record what you’re saying when you’re in the suit?

JACKSON: We set out not to ADR, and unfortunately, I don’t think the technology is quite there yet. Ironic, really, because Isaac is such an advanced being. But yeah, I’ve been ADR-ing all the lines. And it’s great. Me and Seth have these fantastic sessions. Seth directs me, it’s great fun, we get to play around and really find exactly how Isaac operates and the way he works and the way he talks, and the nuances. Because the thing is, he’s been sent to The Orville to absorb information and to observe the human race and all the aliens. And what is nice about Isaac is, he adapts to that, and he is actually changing as [the series] goes on. 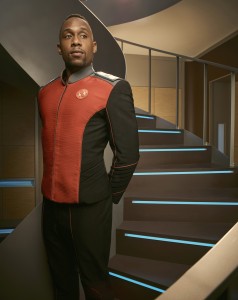 JACKSON: He is so easygoing and he is so passionate about what is going on. And I think, maybe it’s fate, maybe it’s coincidence, but all of us in the cast completely understand what he’s going for. And it’s great fun to make that vision a reality.

LEE: I think Seth is someone who respects art, and respects people who love art. So if you come in with really specific ideas and really specific thoughts about a line or a thing, he’s so open to letting that become a part of your character.

JACKSON: Yeah. He’s really open to suggestions. If you have something where you go, “I don’t think my character would say that,” he’ll go, “Okay, fair enough.” You know your character way better than he does now. He’s very passionate about the craft of acting, so he’s behind us in every way, really.

AX: What is your ship’s uniform like to wear? It looks like it doesn’t breathe a lot …

LEE: No, they did a good job fitting it to my body. It was tailored perfectly and it’s comfortable.

JACKSON: You look hot in that costume.

JACKSON: Come on, you look buff.

LEE: Well, they did a good job of making it fit well.

JACKSON: I think John LaMarr is going to have a lot of fans in this show.

AX: THE ORVILLE is kind of an homage to STAR TREK. Were either of you STAR TREK fans?

LEE: I was not. I’m coming into this sort of brand-new and fresh.

JACKSON: Yeah. I watched STAR TREK: NEXT GENERATION and VOYAGER. When I first spoke to Seth on the phone, I was back in London, and we had this phone call, which was very surreal for me, having been such a big fan of him for many, many years, and we bonded over STAR TREK. And we bonded over the great sci-fi writers, Asimov and Iain M. Banks, and the inventiveness of those writers. Iain M. Banks is a British sci-fi writer, quite a prolific one, and one of the best, I think. We bonded over the vision of these writers and the fact that these could be so inventive. I think a lot of sci-fi [can have] great special effects, great cast, you go and see it, and it is boring. It’s very formulaic. But the scripts for this show are not at all, and that is half the battle for me. I thought that these scripts were so good that you can’t fail with them, really.

AX: Are you doing an American accent for Isaac?

JACKSON: I am doing an American accent, yes. They specifically asked for not an English accent, and I’m doing my best at [sounding non-English]. I think it’s an interesting accent, because yes, it’s American, but also, he’s not a real human being, so there’s that kind of four hundred years in the future, pan-galactic American accent. It’s different to your American accent today, I would think.

AX: Is there anything either of you had to learn in order to play your roles, like how to walk in the costume, or handle certain props, or …?

LEE: One of my best friends in the world is Ahmed Best, who played Jar Jar Binks in STAR WARS. So I remember when I got this show, I called him up and I said, “Hey, man, I don’t know too much about the sci-fi world, so is there anything that you want to tell me?” So he guided me through. For the most part, he just told me to be myself and add what I wanted to add to my character.

JACKSON: The distinction between sci-fi and fantasy is, [science-fiction is] real. It’s based on real fact. Good sci-fi is believable. You can imagine it actually happening at some point in the future, or even today. The big thing about sci-fi, and the difference between fantasy and sci-fi, it’s that sci-fi has to be believable. Great sci-fi you can completely buy into. You can believe that it will happen, that it is happening, and I think you have to be a real character to support that. I think everyone on the show is very believable, whether they’re aliens or humans, there’s a huge amount of truth to everyone’s performance, and that is absolutely essential to make this show work. 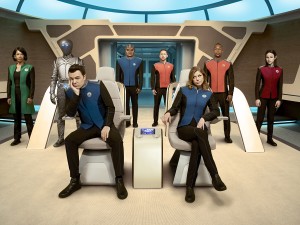 AX: Did Ahmed Best have any advice about dealing with fans, conventions …?

LEE: Yeah, he gave me tips on how to deal with Comic-Con, conventions and things.

AX: Did you do Comic-Con for THE ORVILLE?

JACKSON: We did, yeah.

LEE: It was a lot of fun, too. It was a whirlwind. It was crazy.

JACKSON: Nonstop, wasn’t it? It’s such good fun, though. The nice thing about Comic-Con is, we got to meet the fans. There were so many people there that we met face to face, and that to me was very exciting, because you got to meet people who actually care about what we’re doing. What is a show without people who watch it? So it was a special moment for me.

JACKSON: You know, it’s a new adventure, it’s a new story every week, you can watch them whenever you want, out of order – it’s just going to be a damn good story, every week.

This interview was conducted during Fox Networks’s party for the Television Critics Association (TCA) press tour.

Related: Exclusive Interview: Scott Grimes on Season 1 of THE ORVILLE