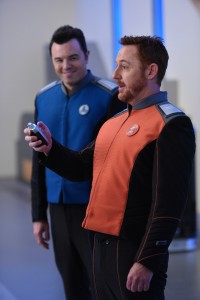 Massachusetts native Grimes had previously worked with THE ORVILLE’s creator/star Seth MacFarlane, voicing multiple characters on MacFarlane’s FAMILY GUY and AMERICAN DAD. Grimes has also been a series regular on PARTY OF FIVE and E.R., had a major role in the miniseries BAND OF BROTHERS and starred in the cult favorite horror comedies CRITTERS and CRITTERS 2.

ASSIGNMENT X: Were you a big genre guy before becoming involved in THE ORVILLE?

SCOTT GRIMES: STAR TREK – STAR WARS more than STAR TREK, though, you know what I’m saying? Space, definitely. Sci-fi, FORBIDDEN PLANET. My dad showed me all the old sci-fi movies. That’s what I attached myself to.

AX: Your props department on THE ORVILLE is extremely creative. Have you had to learn how to use anything, or in fact pick it up and go, “What am I supposed to be doing?”

GRIMES: Well, the thing is, it’s all in your imagination, right? So when I drive the ship, nobody knows how to drive spaceships. We don’t have spaceships. So J. Lee [who plays Gordon’s fellow crew member Lt. John LaMarr] and I have to figure out what buttons do what. Because you know there are people out there who are going to go, “Well, you’re not doing the same thing every time.” So yeah, you have to be creative about it, but these guys are incredible, and they help you through it. They know the genre, they know way more than I do, but it’s been great to use my imagination.

GRIMES: Well, we grew up together, Seth’s character and I, and I was probably the fraternity guy that did too many pranks and was a bit immature. And I just met [John]. We just get along. We’re both funny and we’re both witty and we’re both stupid, so we’ve just immediately become buddies.

AX: As Gordon, do you get to do anything like roll the ship?

GRIMES: We do a thing called “Hugging the Donkey.” It’s a term Gordon uses, which is definitely rolling the ship, and yeah, I drive the crap out of this ship.

AX: Have you ever done any action sequences that are analogous to this?

GRIMES: Oh, no, I haven’t done that. Horseback riding I did. We did horseback riding on this show. You’re going to be so surprised where this show goes. We did a whole Western theme that’s pretty awesome.

AX: What is Gordon’s attitude towards the alien races he meets?

GRIMES: Well, in four hundred years, everybody’s attitudes towards aliens is a little cautious, because some of them aren’t nice aliens. But the universe is vast in the future, and everybody hangs out with everybody. We have aliens on the ship, that work on the ship.

AX: So it’s like, “This person is from a country I don’t know much about, and they work here, and that’s great.”

GRIMES: Yeah, in the future, everybody is welcome. Unless they are a hostile creature.

GRIMES: Right. If they’re a member of the Union, which is what we have. There’s some sort of – I call it the SAG [Screen Actors Guild] of the universe [laughs].

AX: Is that a shout-out to your guild?

GRIMES: One hundred percent. I could have said anything, I could have said the United Nations. But I use SAG, because it’s what I do. But if you’re not a member of that union, I’m assuming you’re going to be an enemy. And we have that enemy, called the Krill, which if you watch the thing, that’s the name of our enemy in this.

AX: Are we going to get a space whale at some point, since on our world, whales eat krill?

GRIMES: That was the first thing I laughed at, when I found out the name of our biggest enemy is named after one of the smallest creatures in the ocean.

AX: Unlike most shows set on spaceships that add the starfields afterwards, you have a continually moving starfield running outside THE ORVILLE’s set windows and windshield. Did you ever get vertigo from that?

GRIMES: Yeah, yeah. It’s like any videogame, where you’re watching it too deep. I don’t get sick or anything. But yeah, if something tips this way, your mind is an amazing thing, and it’ll trick you. So that set definitely tricks me.

AX: Since you said STAR WARS is your longtime space story passion, do you see any similarities between THE ORVILLE and STAR WARS?

GRIMES: Wow. No. STAR WARS to me is a whole different thing. It’s a long time ago, it’s in the past. This is definitely future of Earth, and future of civilization. The only thing would be the creatures. We have a ton of creatures in all the episodes, kind of like what [STAR WARS] did, and we stay true to the practical rather than the CGI creatures. It’s makeup and it’s prosthetics. So the original STAR WARS is that way, which is practical special effects. There are a couple extensions to the creatures that the VFX people add to the creatures, but they’re all practical. I mean, Seth and I did a whole episode where we have to dress up as Krill, and I was in two-and-a-half hours of prosthetics makeup every day for two weeks. It sucked. In the show, it’s a holograph, but we have to as actors go through the thing, and it sucked. I’m glad that I don’t have to do what Peter Macon [who plays Lt. Cmdr. Bortus] has to do every single day. It’s incredible.

GRIMES: Yeah, I just had a record come out that I did with Russell Crowe and a band we have called IGP, Indoor Garden Party. This is just a record album, a bunch of middle-aged men.

GRIMES: Stop comparing it to anything you’ve ever seen. It’s fresh and new. It looks similar to other things, but watch it and you’ll see that it is not the same at all. It’s from the mind of a man that is nothing but original, and he’s bringing you the most original television you’ve ever seen. He’s giving you what HBO gave you, but now he’s bringing this to network.