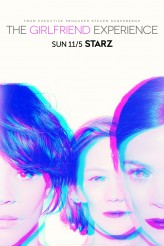 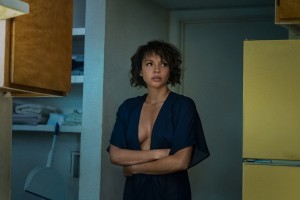 In Season 2 of Starz’s Sunday-night drama THE GIRLFRIEND EXPERIENCE, each hour-long segment contains two separate stories. The title of THE GIRLFRIEND EXPERIENCE, which is adapted from the film of the same name made by series executive producer Steven Soderbergh, refers to a business arrangement with women who offer not just sex but a facsimile of romance to their wealth clients.

One half of this season of THE GIRLFRIEND EXPERIENCE. The other half, written and directed by series co-creator Amy Seimetz, follows ex-GFE practitioner Bria Jones, an Englishwoman who is under federal witness protection in New Mexico.

British actress Carmen Ejogo, who plays Bria, has twice portrayed real-life civil rights heroine Coretta Scott King, in both the feature film SELMA and the telefilm BOYCOTT. She plays magical leader Seraphina Piquery in the FANTASTIC BEASTS AND WHERE TO FIND THEM franchise and appeared earlier this year in ALIEN: COVENANT. She talks with us about playing a series lead that was written specifically for her as an actress.

ASSIGNMENT X: Were you familiar with either the first season of THE GIRLFRIEND EXPERIENCE, or the original film?

CARMEN EJOGO: I wasn’t familiar with either when I was approached if I could do the second season, and in fact, the first season hadn’t aired when Amy [Seimetz] and I started having conversations about the second season. So it hadn’t become a darling as show title when I first decided I was going to get involved. But by the time I’d got deep into conversations with Amy, it became something that was on the air and had become very successful. And then I realized I’d definitely made a good choice [laughs].

AX: You had preliminary conversations with Amy Seimetz, so was the role pf Bria Jones written specifically for you?

EJOGO: Yeah. Amy came to me with some sort of a general idea of a concept because she wanted to explore the themes, and then when I came on board, she and I started talking about things that interest me, subject matter, territories and space that I was interested in exploring. And then she actually wrote the material around those conversations and around me, which was quite a luxury, to have something tailor-made for me in that way. 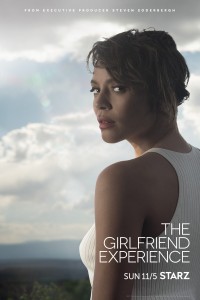 AX: Since Bria, like you, is English, if she has to be in Witness Protection, why wouldn’t she just go back to England?

EJOGO: [As Bria], I have to testify. So I have to stay close to home until at least that point [of giving testimony]. There are all kinds of things that maybe are artistic license that we explore. It’s very difficult to get a full understanding of how Witness Protection works. We did try to research as much as we could. For obvious reasons, they don’t want to tell you too much. So some of those things that end up on the screen may end up being creative license that we’ve taken, but I think we’re pretty true to the spirit of how that system and that situation work.

AX: How much of Bria’s story is the Girlfriend Experience and how much is what looks like a crime thriller?

EJOGO: Hmm. I think they’re both threaded throughout my show. We’re always dealing with a woman that is essentially a GFE from the beginning ‘til the end of the show, but there’s definitely a thriller/crime aspect that also runs through the thread. So I think if you’re into what you’ve got in the first season in that regard, you’ll be very satisfied by our storyline.

AX: And what is Bria’s opinion towards her line of work? Does she just see this as, “You know, this is the least objectionable thing I could do to get this amount of money”?

EJOGO: I don’t know if it’s the least objectionable thing. I think she’s good at it, and I think it’s at this point, the avenue that is most available to her in terms of what she understands of herself, what she thinks she has to offer, and I think the trappings of this lifestyle and this world are strong enough and exciting enough and in her mind lucrative enough that she’s willing to stay in.

AX: Does she actually want a boyfriend or a girlfriend, or does she think, “No, that resembles work too much”?

EJOGO: I don’t think we ever get there. I think there’s so much that’s happening that has some momentum in the show that the idea that she had the time or the ability to really entertain a real relationship never really emerges.

AX: Too much other stuff going on …

EJOGO: Way too much.

AX: Did you have fun on FANTASTIC BEASTS AND WHERE TO FIND THEM?

EJOGO: Oh, I loved making that. I love mixing it up. I love shifting. If anyone’s followed my career, it’s different every time I do a project. That’s what keeps me excited by it, that’s what keeps it fresh. But there’s always something about the characters I like to portray that is complex and nuanced, hopefully, so FANTASTIC BEASTS definitely satisfied that criteria.

AX: What would you most like people to know about THE GIRLFRIEND EXPERIENCE?

EJOGO: That it’s a really fresh and honest and nonjudgmental approach to a subject matter that has controversy built in, but I think the way that we explore it means you can really have an interesting conversation after watching it. And I think that’s the part of it that makes it particularly exciting for an audience. It’s not just the viewing experience that is the part that’s satisfying, it’s the conversation that will come out of it, for yourself and with people that have also watched it that I think will be just as satisfying.

This interview was conducted during Starz’s portion of the Summer 2017 Television Critics Association (TCA) press tour.