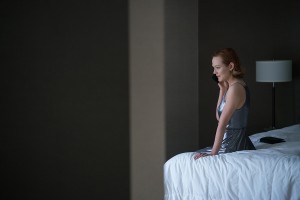 The second season of THE GIRLFRIEND EXPERIENCE, which has its finale on Starz this Sunday, December 17, is divided into two parts. Each half is written and directed by one of the series co-creators, Lodge Kerrigan and Amy Seimetz.

Louisa Krause stars as Anna Greenwald, who offers “the girlfriend experience,” GFE for short, in Kerrigan’s portion of Season 2. The GFE involves a woman selling services of full companionship, as well as sex, to clients who can pay for it and who she deems acceptable. Anna’s life becomes exponentially more complicated when she falls in love with Washington, D.C. power broker Erica Myles (Anna Friel), who has some risky ideas about how Anna can use her business to achieve political ends.

Actress Krause, originally from Virginia, has a recurring role on BILLIONS and has been in a multitude of feature films, including the acclaimed MARTHA MARCY MAY MARLENE and YOUNG ADULT. She’s happy to talk about her own experience making GIRLFRIEND.

ASSIGNMENT X: With the same director – Lodge Kerrigan – directing all your episodes, does that make it feel like doing a three-and-a-half-hour movie instead of an episodic series?

LOUISA KRAUSE: Yes. And we had all seven scripts ahead of time. I did the work so I could orient myself, because sometimes we would shoot parts from three different [episodes] in the season in one day, and you just really have to have the details of those, so I knew where I was at every moment. It’s quick-paced, but it’s really good. I knew I was making some great cinema. I think it’s great art, and it did feel like a film.

AX: What is Anna’s attitude towards her work, offering the Girlfriend Experience?

KRAUSE: The character I play loves what she does and is empowered by her job. And she loves having sex.

AX: Is Anna a lesbian by preference when she’s not working?

KRAUSE: I never thought of her as a lesbian. She is an individual who finds herself falling in love for the first time, and she services both male and female clients.

AX: I was just wondering, because Erica is a woman, if Anna sees that relationship as something very different from work …

KRAUSE: I don’t think that ever crossed her mind. I think it’s a surprise when she finds herself opening up to someone when it’s not quite clear if it’s work or not. And that’s a surprise. But it’s a new experience she’s having, and it’s a surprise for her, to open up, become vulnerable. 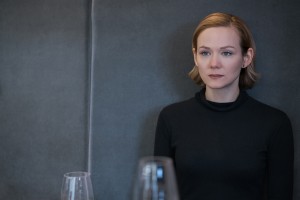 AX: Although Erica exercises her control over the people she advises in a different way than Anna exerts over her clients, they are both essentially being paid to control others. Do they sort of bond over the idea that they like people paying to be controlled by them?

KRAUSE: I think that’s in there, and you can make that connection, but that’s never something that’s stated. But in their chemical makeup, I feel like there’s a similarity in that they are both powerful women in what they do, and that they’re able to be manipulative and manipulated, and they’re able to control and be controlled. They’re powerful women, and they’re confident in what they do, and I feel like that is the ultimate attraction.

KRAUSE: Yeah. I’m working on an animated feature right now that will probably be a couple of years in the making called THE CRYPTOZOO. I’m voicing animated character. I have a few films that are coming out, a movie called NEW MONEY, another one called THE SUPER and another one that just received distribution called WE’VE FORGOTTEN MORE THAN WE EVER KNEW.

AX: And what would you most like people to know about THE GIRLFRIEND EXPERIENCE?

KRAUSE: You will see raw, unapologetic truth. And THE GIRLFRIEND EXPERIENCE is a hundred and ten percent times infinity what it is, so get ready [laughs].