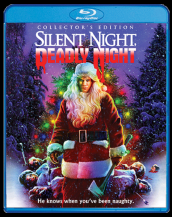 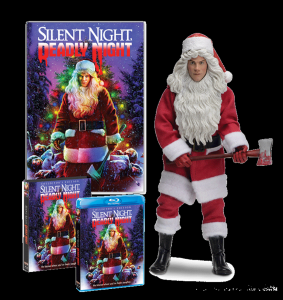 One of the most notorious movies of the 1980s is the rather innocuous 1984 Christmas slasher film SILENT NIGHT, DEADLY NIGHT. At the height of low budget horror at the boxoffice, this film had the unfortunate distinction of being acquired and released by a major studio at the time – TriStar Pictures. That unto itself spelled the death knell for the movie since it was attacked and savaged by the P.T.A. (Parent-Teacher Association) saying it was inappropriate to have a killer Santa terrorizing people in a movie – and marketing the movie during family friendly programming (such as sports shows).

Yes, there might be some truth to the inappropriateness of the film’s marketing campaign, but there had been many Christmas slasher films before (and since then) not to mention the film had nothing to do with an actual Santa terrorizing kids – it was a psychopath wearing a Santa costume. Yes, semantics, but it still was a pretty big over-reaction.

Released, ironically enough on the same weekend as the first A NIGHTMARE ON ELM STREET, this film was soon pulled from release giving it an even bigger want-to-see-factor which resulted in its notorious reputation.

Unlike ELM STREET which has stood the test of time to become a 1980s classic, SILENT NIGHT doesn’t hold the same distinction. It’s a rather poorly made film that features glimpses of what the film should have been if it were not for the meandering plot that it never really settles on what it wants to be.

That doesn’t take away from the gorgeous new two-disc set Shout! Factory has put together for the film. Loaded with special features and two versions of the film (the theatrical cut and the unrated version), it’s been lovingly restored with a brand new HD Master from the original camera negative. This has resulted in one of the best looking prints of the movie yet. In fact, some of the ugliness and cheapness of the production is actually enhanced by this new print.

The back story of SILENT NIGHT film is actually pretty solid. Young Billy Chapman along with his parents visit his unresponsive grandpa in care facility. When his parents leave the room, grandpa suddenly becomes a chatty cathy scaring Billy into thinking Santa comes to punish those who are naughty. Not surprising, that night, a criminal wearing a Santa costume holds up his parents on an abandoned road and murders his father and rapes/murders his mother. It’s pretty horrifying and graphic, but effective nonetheless.

Here’s where the movie slowly derails. It then spends more time with Billy, now at an orphanage with his younger brother and finding himself tortured even further by the head nun who continues to beat into Billy the notion of how horrible Christmas is and how bad little kids are punished.

Cut to years later, Billy is now a teenager and tries to adjust to life on the outside. One of the nicer nuns sets him up with a job as a stock boy in a toy store. In one of the film’s better moments of comedic irony, Billy is forced to play Santa to a bunch of bratty kids. Things go batty from there, as Christmas Eve arrives, Billy gets jealous, more insane and goes on a rampage (dressed in his Santa outfit) on his fellow employees, then terrorizes the small town and finally goes after the orphanage that is half responsible for making him the crazy psycho that he’s become.

The inherent problem with SILENT NIGHT, DEADLY NIGHT is each section feels very episodic as opposed to a complete, coherent film. When Billy finally starts terrorizing the town on Christmas Eve, the film gains momentum only to come to a halt as we cut to the next day as Billy is now gunning for the orphanage. The orphanage sequence should have remained a Christmas Eve event. It would have kept the film’s momentum, kept it scarier and rounded out the events in a more cohesive way. 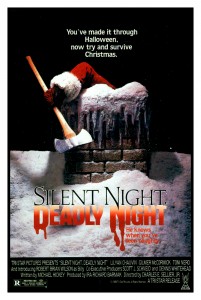 The pluses of the film include some great gore effects and some great black comedy courtesy of Michael Hickey who freely admits during the excellent recently filmed documentaries that he viewed the film more as a comedy than a horror film. It also explains why, at times, the film becomes a little over the top with Robert Brian Wilson performance as Adult Billy.

Of the two prints featured here, the unrated version has an asterix applied to it since the extra gore that was excised to get an R rating, was not uncovered. So there are standard definition inserts of these clips into the HD version of the film. It’s not as jarring as one might expect, and it’s much more preferable to have a full unrated cut, with these small blemishes, then having them included as deleted/extended sequences only.

As noted earlier, the supplementary features are quite comprehensive and just as entertaining, if not more than the actual feature. Produced by Justin Beahm, we get a great documentary called SLAY BELLS RING: THE STORY OF SILENT NIGHT, DEADLY NIGHT (featuring the screenwriter, producers, editor, actors and more) which digs deep into the film’s history, the controversy and its subsequent rebirth as a cult film. Also included is featurette on the filming locations (then and now) and brand new commentary with star Wilson and producer Scott J. Schneid. A separate track from a previous edition features commentary with the writer and producers, an audio interview with director Charles E. Sellier, Jr., a featurette showcasing quotes on all the outrage the film spawned and a poster/still gallery.

Shout! Factory also has two editions of this film available. One is the two-disc Collector’s set, the other is a limited edition that includes an actual action figure of Billy dressed as killer Santa. If you’re a fan, it’s definitely a collectible worth owning and bringing out every Christmas as part of your annual decorations. 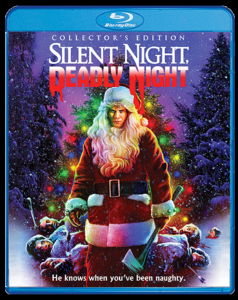 While BLACK CHRISTMAS to me is still the ultimate Christmas slasher movie, SILENT NIGHT, DEADLY NIGHT is still a close second. It’s far from a perfect movie, but it has so many antiquated 1980s charms (it’s more funny, than scary) it’s still worth seeing it in its most pristine form and we have Shout! Factory to thank for that.

TCA News: NBC explains decision to bench COMMUNITY and no, it's not ca...
TV Review: THE X-FILES – Season 10 – “My Struggle” – Season Premiere
DORKING OUT - Episode 47: The TV Season Review & Extra Extra Our F...
Movie Review: HERE ARE THE YOUNG MEN