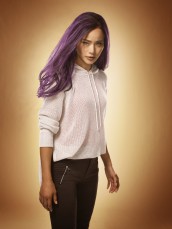 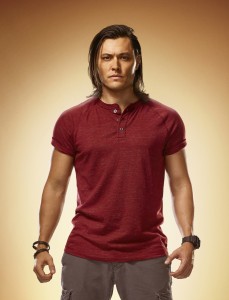 In Fox Network’s series THE GIFTED, which just returned for Season 2 , Jamie Chung and Blair Redford play one of the show’s power couples. Make that superpower couples. Chung’s Clarice Fong, aka Blink, can open portals that allow travel from one place to another. Redford’s John Proudstar, aka Thunderbird, is an ex-Marine who is almost indestructible and has super-strength and heightened senses. In the X-MEN-derived series, developed for TV by Matt Nix, both John and Clarice are part of the Mutant Underground, the more pacifistic mutant organization operating in secrecy during a period of human intolerance. (The more violent, militant mutants are in a group called the Inner Circle.) Clarice and John were having some relationship issues, even before John got kidnapped during the midseason finale.

Chung previously starred in the series SAMURAI GIRL and recurred as Mulan in ONCE UPON A TIME and as Valerie Vale in GOTHAM; she also voiced Aimi Yoshida in the X-MEN: DESTINY videogame. Redford’s resume includes the soaps THE YOUNG AND THE RESTLESS and PASSIONS, and the dramas 90210, THE LYING GAME, SWITCHED AT BIRTH and SATISFACTION.

In a sit-down interview, Redford and Chung point out things about each other’s characters, tease one another, and generally seem happy to be working together.

ASSIGNMENT X: Can you tease anything about THE GIFTED Season 2?

JAMIE CHUNG: You’ll get the origin story of the Frost sisters [clones played by Skyler Samuels], you’ll dive deep into what he’s [John’s] gone through, and why he is who he is, and his demons. [to Redford] What can you tease?

BLAIR REDFORD: We start every episode with a flashback, so I’m pretty hyped. I get a flashback, and it shows you a side of Thunderbird that you never saw in first season. He’s not focused, he’s not goal-oriented, he’s kind of living for himself, and getting into some pretty crazy fights.

CHUNG: You dive deep into their personal relationship, so you have a lot of cool, intimate moments between the two of us. But really, the focus, the highlight of the season is, where do we go from here? Now that the Mutant Underground is in total disarray, where do we go, how do we continue on? It’s really that story of picking up the pieces and starting over.

AX: Some characters went off with the Hellfire Club at the end of Season 1 …

CHUNG: Yeah, exactly. It was Polaris [played by Emma Dumont] and Andy Strucker [played by Percy Hyde White], and Sage [played by Hayley Lovitt]. They went with the Hellfire Club, which are now called the Inner Circle, and we stayed with the Mutant Underground.

AX: Why do you think your characters stayed with the Mutant Underground? Were either of you surprised by that?

CHUNG: No, I think it was pretty evident who Blink was going to stay with, because she has a relationship with Thunderbird, but also, she believes in the cause. The Inner Circle is really dark, they go about things in a totally different way. And so I don’t think that she aligns morally with that.

REDFORD: I wasn’t surprised. Thunderbird would be very hard-pressed to go to the Inner Circle/Hellfire Club. He’s a pretty virtuous guy, even though sometimes he can be toned down, and he hides his emotion, and he’s very militant-minded, he knows what he stands for, he knows what the fight is about. So it would take a lot to sway him to the other side. I think he comes from a darker place. He has a history that you find in Season 2. He’s been to a darker place. But after crawling out of that, he’s not going to go back.

AX: When Clarice/Blink is manifesting her powers, she has blue hair and ice-blue eyes. John/Thunderbird seems a little closer to your real-life look …

REDFORD: Well, I guess so. I don’t really walk around L.A. with a leather biker vest on and nothing else underneath [laughs]. But other than that, yeah. I grew my hair out for the role, so I’m trying to emulate Thunderbird in that way.

AX: Because John’s previous girlfriend Dreamer, played by Elena Satine, implanted false memories in Clarice’s mind to make her fall for John so that she’d help him, Clarice has more experience with their relationship than John does. Does that play out at all, and is there any humor in that?

REDFORD: I think he’s definitely got the hots for Blink from the beginning. She’s made him a little lightheaded.

CHUNG: I think I always find humor in my sarcasm and making jokes. But in terms of their relationship, he’s always the serious one, she always kind of pokes fun, but certainly, the strain of their relationship comes from a different group that is introduced, which is the Morlocks. And there’s someone who leads the Morlocks that she’s quite smitten with, and that’s a big change.

REDFORD: I think “smitten” is a strong word. I think “mildly interested with a pepper of curiosity.” But you know, half a dozen of one … 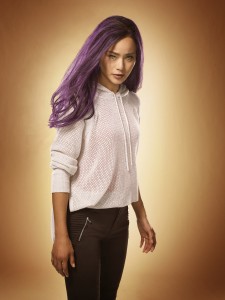 AX: You were in SAMURAI GIRL and then ONCE UPON A TIME …

REDFORD: I auditioned for SAMURAI GIRL. I didn’t get it.

AX: Can I ask about ONCE UPON A TIME?

CHUNG: That was one of my favorite projects, and I’m still very good friends with all of them.

AX: Do you consider yourself a genre person?

REDFORD: I grew up as a kid, huge X-MEN fan. In my closet right now in Atlanta, I’ve got boxes full of probably seven hundred comic books. Twenty percent of that is X-MEN. Every Saturday morning, I would watch the X-MEN cartoon with my neighbors. I’m living the dream right now. I love this show.

AX: Were either of you surprised by what your powers looked like, once they went through special effects?

REDFORD: For me, no, because they don’t use special effects for my powers, they just use practical effects.

CHUNG: You do have heightened vision …

REDFORD: They do the “Thunder vision” and all that. That was cool to see.

AX: Did you have to figure out, “Okay, what am I doing when I’m exercising my powers,” or is that set in the comics?

REDFORD: When he’s doing his tracking ability, that’s actually something I came up with, kind of going down to the ground and doing the Thunderbird tracking stance, something I started developing when I was auditioning for the role, and they wrote it in, so it worked out nicely.

CHUNG: For me, it feels so ridiculous, trying to open up a portal, ripping into time and space. It just looks like I’m constipated [laughs]. But the result is quite rewarding. When we actually get the effects, it’s wonderful.

AX: What was the most surprising thing to you in Season 1?

REDFORD: In Season 1, the most surprising thing? The day I read they were going to have Dreamer shot in the chest. I don’t think anyone was ready for that. When I read that, it was a pretty big shock to me. But I’m not saying that I don’t like it – I think that our show needs to have death as a real thing. It’s important. Shows like GAME OF THRONES [do] that, where you kill main characters. And it creates a real fear, and a reality to the story.

This interview was conducted during Fox Networks’s party for the Television Critics Association (TCA) press tour.