The actor also discusses the end of PERSON OF INTEREST 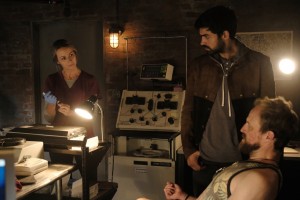 In Season 2 of THE GIFTED, Tuesday nights on Fox, the Strucker family is more beleaguered than ever after finding that teen children Lauren (Natalie Alyn Lind) and Andy (Percy Hines White) have extremely strong superpowers in Season 1. Lauren is now determined to help with Mutant Underground rescue operations, while Andy has taken up with the violent faction the Hellfire Club. Dad Reed (Stephen Moyer) is grappling with his own newly-discovered powers. This leave mom Caitlin Strucker, played by Amy Acker, as the lone regular human in the clan.

Acker is no stranger to genre television, having had series regular roles in ANGEL, ALIAS, DOLLHOUSE, HAPPY TOWN, and PERSON OF INTEREST, among other credits. Sitting down to talk at a party thrown by Fox for the Television Critics Association (TCA) press tour, Acker expresses her great enthusiasm for the form. “I love doing any sci-fi things. It’s something I’ve always enjoyed, and I just love the genre, and I love that I’ve gotten to play such cool characters, and that anything can happen. I will be happy to live in the sci-fi world forever, if that’s what it is.”

ASSIGNMENT X: Can you say what you’re looking forward to in Season 2 of THE GIFTED?

AX: Well, we know Andy isn’t around much, because he’s gone over to the dark side …

ACKER: Yes. We come back six months later [after Andy broke away at the end of Season 1], and my character has now got this laser focus that she’s getting him back. And so the choices that she’s making are not always for the greater good. She’s kind of got these blinders on that she’s making choices just to get him back, even if it hurts other people.

AX: So is Caitlin neglecting Lauren?

AX: Caitlin started out very nonviolent. Is she maybe a little bit less committed to nonviolence this season?

ACKER: Yes. She has definitely turned a new leaf, and decided that we are indeed at war, so whatever she needs to do to get Andy back is worth it.

AX: So are you dealing a little more with firearms and ordnance?

AX: Might Caitlin get a little more exceptional this season? There are some pretty exceptional characters. Is she going to come into some surprising area of expertise?

ACKER: I feel like she’s exceptional in that she’s the only one without powers [laughs].

AX: We’ve met a lot of Reed’s family and Caitlin’s brother. Are we going to meet any more of your relatives this season?

ACKER: Not that I’ve heard of. Now that everyone thinks that we’re dead, we’re kind of having to be under the radar.

AX: How do you feel about the effects in THE GIFTED? At this point in your career, you’ve dealt with so many effects that maybe not too much can faze you …

ACKER: Yeah, I know. Steve [who spent seven seasons on TRUE BLOOD] and I kind of feel like we’re the effects experts [laughs], so …

AX: Do you have a favorite scene from Season 1 of THE GIFTED?

ACKER: I liked the end of everything, when everything was falling apart, and I got to have the gun, and shoot out the window, and be with them all. I thought that was probably my favorite.

ACKER: I would have loved if it never ended, because it was such a fun show, and such a great group of people. So I was mostly sad it was over. But I liked the way Jonah [series creator Jonathan Nolan] did it.

ACKER: I just got to do an episode of SUITS, so they brought me back [as recurring character Esther Edelstein], which was fun. I love those guys, and that’s such a good group, so it was fun.