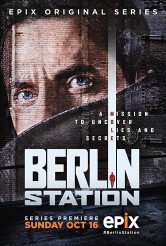 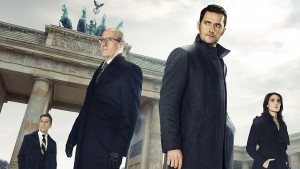 In Season 3 of BERLIN STATION, which begins Sunday December 2 on Epix, it’s six months after the events of Season 2. The Berlin station of the CIA sends two of its officers, Leland Orser’s Robert Kirsch and Richard Armitage’s Daniel Miller, to Estonia for a bit of diplomacy. Things take some drastic turns, and before you can say “Ukraine,” it looks like there may be open war between Russia and Estonia.

Orser, who has played Kirsch since BERLIN STATION began, is a native of San Francisco. His other credits include RAY DONOVAN, SE7EN, SAVING PRIVATE RYAN, INDEPENDENCE DAY, ER, 24 and all three TAKEN movies.

Speaking by phone, Orser reveals what he can about BERLIN STATION’s third season, as well as his memorable canoeing sequences with Richard Jenkins (who plays former station chief Steven Frost) in Season 2.

ASSIGNMENT X: Season 3 of BERLIN STATION seems like it’s going to be very timely, given the rising tensions between Russia and the Ukraine again …

LELAND ORSER: You look at the headlines every morning. All of us [working on BERLIN STATION] are texting each other these headlines every morning, going, “Oh, my God. Oh, my God.” I was in the ADR [automated dialogue replacement] studio the other day, and I was literally saying words that I had heard on CNN that morning. [In real life], you’ve got the Ukraine naval clash with Russia. You’ve got [real-life CIA director] Gina Haspel not being allowed to testify on the [journalist Jamal] Khashoggi murder, just two examples of things that we’re going to be talking about, and portraying fictionally, this season.

AX: In the series, the CIA Berlin station is continually being stymied by forces in Washington, D.C. Do you think the real-world situation right now regarding the relationship between the CIA and the White House gives BERLIN STATION an added layer of verisimilitude?

ORSER: I’m afraid so. I’m thinking about how to phrase this, the best way to phrase this without pointing fingers. The CIA’s job is to find the truth and deliver it to the White House. How does that job change in a post-truth/alternative facts/fake news world? It makes their job much harder. It makes them have to work that much harder. They are more than ever on their own.

AX: Have you done any more research for this season of BERLIN STATION into the politics of Estonia, or anything else involving spy-craft or …?

ORSER: We never stop that. We had a wonderful new consultant on the show this season. We never stop learning, reaching out. I now have friends in the CIA, and friends who used to be in the CIA. We never stop talking, digging, trying to figure out ways to make the characters better and to make the stories better. And that was the exciting thing about our new collaborator, Jason Horwitch, who came on to be the head writer and show runner. All he wants is for the stories to be great and real and to be accurate, and he essentially picks up where we left off last season, takes us ahead a few months, and then hits the ground running. He really made the show his own and tells this wonderful story that starts out small and ends up being monstrously big. He wrote a series called RUBICON. He came to us directly from HOUSE OF CARDS, and we’re incredibly lucky to have him. Many people wanted the job. He rightfully won it and has done a hell of a job with it.

AX: Is production for BERLIN STATION still physically based on Berlin for Season 3?

ORSER: The production is still based in Berlin. We shot a lot of it in Budapest, because the storyline takes us to that part of Europe. So we set up camp for a good portion of this season in Budapest, which was closer to the countries that we deal with in the storyline.

AX: So you had Budapest standing in for Estonia?

ORSER: No, we actually went to north [of Budapest] for that, to a little town called Sopron. I know they definitely did shoot in Estonia. But whatever we could do and control, we shot in the north of Hungary.

AX: Last season, you and Richard Jenkins spent part of an episode in a canoe because your characters were fleeing an assassin and it was the only means of escape …

AX: How was that to film?

ORSER: What more could you want out of life than to be in a canoe with Richard Jenkins in a fjord outside of Bergen, Norway, in the pouring rain?

ORSER: Apparently, he’s a big canoe-er. I was not. But we each only had one paddle. And yes, I think it rains three hundred and sixty-four out of three hundred and sixty-five days up there [laughs]. Nobody bothered to tell us that, and we were dressed in suits and ties. However, that being said, it was one of the more spectacular, exhilarating, beautiful experiences of life, being on the water in the fjords. It was just extraordinary beauty. Waterfalls would just show up after a downpour, and the wildlife you would see, and being that close to it, and being a part of it, it made you feel very, very small, but also part of the world, the universe, nature. It was epic.

AX: Did you have a rescue boat nearby in case the canoe capsized?

ORSER: Yes. There were lots of boats that you didn’t see on camera. But the other thing is, we would sneak off on our own, in between, while they were reloading the camera, and we would zip off to little coves and inlets and snoop around. We really had a terrific time that day. That was really incredible.

AX: Was that one of the more unexpected things you’ve gotten to do in playing Robert?

ORSER: A hundred percent. And one of the unexpected treats of this season was going down into the sewers and tunnels underneath Vienna. We shoot an entire episode in Vienna, and so we’re down, walking the same paths that Orson Welles did in THE THIRD MAN, and that was really incredible.

AX: Did they clean out a section of the sewer for the BERLIN STATION production, or how did that work, so you didn’t risk getting some sort of terrible bacteria?

ORSER: We had helmets, we had face masks, we had gloves, we had paramedics, we had whatever the Viennese equivalent to Purell is, we were washed down, and wiped off, and inoculated every time we came out.

AX: James Cromwell has joined the BERLIN STATION cast this season. Did you get to work with him?

ORSER: I can’t tell you that.

AX: I was going to ask how it was working with him, but that would entail you saying whether it happened …

ORSER: What a terrific guy, what a fascinating man, what an incredible career. The stuff between him and Richard Jenkins is going to be a total delight for the viewers. The two of them together – such a classic match-up.

AX: Besides the canoe and the sewer, were there any other things on BERLIN STATION that surprised you, where you were thinking, “Wow, I didn’t imagine we’d be doing this”?

ORSER: Yes. There’s a lot this season. There’s so much I can’t tell you, but my character is in the field this season, so my journey is a lot more physical, I get involved in a lot of action sequences on the ground, in the thick of it. So that was challenging in multiple ways. I think this season for Robert is about choices, and usually the choices that he makes end up being the right ones, and I think a number of the choices he makes this season are the wrong ones, and so I think the Fourth of July party [in the Season 3 premiere] is the best you will see him this season. After that, he sort of steps off a precipice and falls down a very dark hole of the journey.

AX: In the first episode of Season 3, we find out that Robert is supposedly going to be transferred to Japan. Did you learn any Japanese for Robert’s presumed transfer?

ORSER: I certainly did. You’re going to hear it in my second scene. [He says a phrase in Japanese.] That’s an old haiku, and I can’t get it out of my head. I think it’s about a pond, dripping water into a pond or something. That’s about it.

AX: If BERLIN STATION goes to Season 4, will it go to TOKYO STATION, or will Robert decide that Europe needs him too much?

ORSER: Boy. That’s the million-dollar question. You’re going to have to wait until Episode 10 to find that out [laughs].

AX: According to IMDB, you have several movies coming up. Can you say what they are?

ORSER: BLINDSPOTTING is produced by Keith and Jess Calder. That’s the movie Rafael Casal and Daveed Diggs did [they also produced as well as starring and writing]. I play the judge in the opening scene. You never see me, but you hear my voice. I did that as a favor for those guys, because they produced THE GUEST and FAULTS, and one other movie that I did with them, THE DEVIL’S CANDY. They’re terrific people, Jess and Keith Calder.

THE ART OF SELF-DEFENSE is Riley Stearns, who wrote and directed FAULTS, a movie that I did, and this is his newest film, with Jesse Eisenberg, and I have a cameo in that. And then I AM THE NIGHT is the miniseries on TNT that Patty Jenkins directed, Sam Sheridan wrote and executive-produced, and it stars Chris Pine. I’m in that. That comes out in the end of January, it takes place in the ‘60s, it’s a really cool noir story. I play Chris Pine’s editor; he’s a newspaper man.

AX: And what would you most like people to know about BERLIN STATION Season 3?