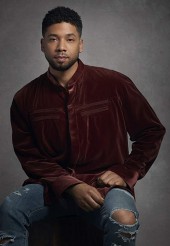 The star and the show runner talk Season 5 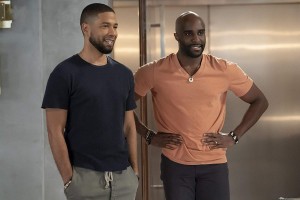 EMPIRE, the drama about a contemporary familial music dynasty, is now in its fifth season on Wednesday nights on Fox. The Lyon family has been through a lot of reversals, including losing the company of the title at the end of Season 4. None of them are taking it lying down, least of all singer/songwriter/music producer gay middle son Jamal Lyon, played by Jussie Smollett.

Smollett is himself a singer/songwriter/music producer, having launched his new indie label Music of Sound earlier this year, which brought out his new album, SUM OF MY MUSIC. As an actor, California native Smollett has been working professionally since age ten, when he appeared in the film THE MIGHTY DUCKS. More recent roles include an ill-fated space traveler in ALIEN COVENANT and famous poet Langston Hughes in MARSHALL.

At a party thrown by Fox for the Television Critics Association (TCA), Smollett is talking with EMPIRE executive producer/show runner Brett Mahoney. Mahoney’s other credits as a writer and/or producer include CODE BLACK, THE FOLLOWING, C.S.I. MIAMI and ELI STONE. Both men are happy to discuss EMPIRE Season 5, though they steer clear of spoilers.

ASSIGNMENT X: How long have you been the EMPIRE show runner?

BRETT MAHONEY: I joined the show last season. Ilene [Chaiken] and I ran it for the first half [of Season 4], I took over in the second half, and now I’m here for Season 5.

AX: What can you say about Season 5?

MAHONEY: We’re doing lots of new things. We’re trying, actually, to return the show to its roots, and by doing that, we’re turning the Lyons into underdogs. They’ve lost Empire, and they have to struggle to find their way back. We’re actually also doing a two-year time jump. So we’re really excited about that.

AX: Does the Lyons being underdogs mean that Jamal gets to do more singing, or less singing, this season?

JUSSIE SMOLLETT: That’s a good question. Brett, I think you’d have to answer that.

MAHONEY: Initially, it’s less singing, because he is under contract to Empire, and he will not perform while it’s run by someone else. So he’s flown off to London and started his own label.

AX: Are you still shooting in Chicago?

SMOLLETT: We are, absolutely.

AX: So are you enjoying being in fake London?

SMOLLETT: [laughs] I love real London, so I think fake London is as good as I can get right now. But it’s great. I’m very, very proud of the storylines that are coming out of Season 5. Without giving too much away, it’s stuff that I care about. It’s for the people that I care about. So I’m really excited. As an artist, it’s really exciting to play the roles that [change over time]. You can’t stay the same, so the fact that it’s the two-year time jump, it shakes us up in a way that roots us in a certain realness and rawness that is why we fell in love with the Lyons, but we have all of this growth in between for the seasons that we’ve had before. It’s great.

AX: Is the Lyons family more or less copacetic right now, or are you back to the KING LEAR dynamic of Season 1, with father Lucious Lyon, played by Terrence Howard, testing the loyalty of all of his sons, and warring with their mother, Cookie, played by Taraji P. Henson?

MAHONEY: When Cookie gave up the Empire [record label] and thought that she could get it back at the end of last season, she didn’t know the struggles that the family would face as a result, so we start this new season with the family very disparate, in very different places, particularly the sons. So Cookie is at a low point, and Lucious is at a low point. And they need to get their empire back, and they need to get their family back together.

AX: And how do Jamal and his younger brother Hakeem, played by Bryshere Y. Gray, feel that they musically should or shouldn’t support their parents?

MAHONEY: Well, it’s interesting. Because of the circumstances, we’re going to see them in very different places. Andre [the eldest Lyon brother, played by Trai Byers] has to face the consequences of what happened to Anika [played by Grace Byers, Trai Byers’s real-life spouse] in last season. So I don’t want to spoil it, but Andre is in prison when we start Season 5. And Hakeem was involved in that shooting in last season …

AX: Okay, does Jamal feel musically responsible to his parents?

SMOLLETT: I think that Jamal feels in every single element of his life a certain responsibility to his family, and to his parents. But I think that what happened when he went off to London is, there’s a certain way that, as you grow, you find these certain boundaries that you have to set – not just boundaries for your family, not just boundaries for your career, but boundaries that you yourself have to set, even for yourself. So finding moments where it’s like, “This is not working for me,” and being okay with acknowledging that, I think that’s where Jamal is. Having lost Tori [played by Rumer Willis] in the last episode of Season 4, that’s a true cautionary tale to him of the idea of, “What are you doing for yourself?” You know what I’m saying? How do you get away from this, and no one is too big, no one is too rich [so that they can] survive and escape from the laws of addiction, really. So it’s been a cautionary tale for him. So I think that’s why he had to go to London, he had to find himself, but also still holding on – a large part of growth is not leaving behind who you were to begin with. It’s about keeping that, but also growing. So Jamal’s in a very different place, but I think he always will find that’s the tug of war of just being in a close-knit family, that tug of war of, how much do I give, how much do I keep for myself?

AX: Do you feel your music as Jussie Smollett is similar or different to Jamal’s music? Do you want it to be similar, or not?

SMOLLETT: I would say that the reason that it’s similar is because we both are extremely autobiographical songwriters. We both live with passion, and love. I always try to get this across, especially since I dropped my album this year, is that I’ve been singing soundtracks all these years, but these songs are mine, do you know what I’m saying? I always compare it to – not to compare myself, of course – but Whitney Houston sang in THE BODYGUARD and WAITING TO EXHALE and THE PREACHER’S WIFE, and all these amazing soundtracks, but when she went to concerts, those were her songs. No one else has sung “Good Enough,” no one else has sung “You’re So Beautiful.” Those are her songs. So Jamal is a huge part of who I am. So I don’t even shy away from that. The music is similar, but it’s just different stories, I guess. He’s had a different upbringing than I have. I think that that’s about it.

AX: Are you using more of your own music in EMPIRE these days?

SMOLLETT: Since I was very shy about using my own music, there have been a lot of songs throughout the years that I’ve written or co-written for the show, but this year, it was very important for me to separate the two. But now that I feel like I’ve accomplished something, and kind of set my music aside, I do feel like I’m open now to my music being in there. Because we all kind of bleed in the same worlds, but completely differently. So it’s – I think you might hear some of my own music, or you might not, but …

MAHONEY: [teasing Smollett] We’re trying to obtain some of his music. He’s a very hard negotiator.

SMOLLETT: [teasing Mahoney back] Yes. Music of Sound, darling. It’s my record label. Talk to it.

AX: With doing ALIEN: COVENANT, did you as an actor think, “I’d like to spend more time in outer space,” or similar action projects, or …?

SMOLLETT: You know what’s so funny? Every single role that I’ve done has been outside of EMPIRE since being on EMPIRE, it’s always made me say, “So, I’m ready to go back to EMPIRE.” [laughs] I played a runaway slave in my little sister’s [Jurnee Smollett-Bell] show UNDERGROUND. I remember all I was saying after that shoot, that was one of the hardest things I’ve ever done, and all I was saying is, “So, I’m going to go back to playing a billionaire gay pop star. This [pre-Civil War] sh** is not right.” [laughs] But yeah, definitely. It was a lot of fun working with Ridley Scott and all the incredible cast, but it’s always nice to come home to EMPIRE, for sure.

AX: EMPIRE co-creator Danny Strong has a new series on Fox, PROVEN INNOCENT, which is also set and shot in Chicago. That’s a legal show and EMPIRE is a music industry show, but do you think there’s a chance of a crossover?

MAHONEY: It’s funny. We were talking about that the other day, whether Jussie wanted to do a little crossover. So we have nothing planned, but it’s always a possibility.

AX: And what would you both most like people to know about EMPIRE Season 5?

MAHONEY: I think Season 5 just feels so fresh and so new, and from the writers’ room, from production to the actors, everyone is so re-energized, and it feels almost like a new show in a way, with all the things you love from it, but with a new energy.

SMOLLETT: Season 5 feels like going to college with all of your high school homies. You know what I’m saying? We’ve grown, but it’s a different environment, it’s a different surrounding, it’s a breath of fresh air, and somehow, we have something new to attack. And as artists, especially artists like us – Brett knows this – we can get creative blue balls so easily that the fact that they’re shaking it up, our writers this year are taking no prisoners, and it’s great. I’ve been a part of the show since Day 1, but I’ve also been a fan of the show since Day 1. So I’ve had things that I’ve wished didn’t happen, or things that I wished did happen, just like any fan or viewer of the show. This year, I know as a fan and as an artist in the show, everybody’s going to be happy.

Related: Interview: Jussie Smollett on Season 4 on acting and directing on the Fox series