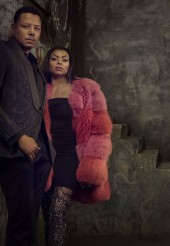 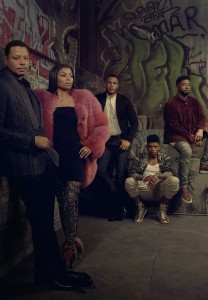 Now in its third season Fox Network’s musical drama EMPIRE won the AFI Award for Best Television Program of the Year and a Golden Globe for leading lady Taraji P. Henson as the formidable Cookie Lyon, not to mention a massive quantity of nominations.

Created by Lee Daniels and Danny Strong, EMPIRE follows the Lyon musical dynasty – besides Cookie, there’s her ex, performer/producer Lucious (Terrence Howard), and their three adult sons – along with their lovers, friends and enemies as they try to stay on top of the charts and with one another.

ASSIGNMENT X: How do you feel about all the awards and the nominations?

ILENE CHAIKEN: Oh, it’s really nice, and I think that we all covet that, but we also understand the world we’re living in. We’re grateful when we get those acknowledgements, and fine when we don’t.

AX: Since Lee Daniels made a guest appearance, will co-creator Danny Strong do likewise?

CHAIKEN: [laughs] Danny’s incredibly busy right now, because he just directed a feature, but I talk to Danny always about how it’s time for him to play a role on the show, so maybe we’ll get him this year.

AX: There has been a lot of discussion this year about a film and television trope of killing off lesbian and bisexual women characters. Given the kerfuffle that arose when this happened on EMPIRE in Season 2, are there going to be any live and slightly less sinister lesbians this season?

CHAIKEN: I live in hope. And if we have any lesbian characters, I’m going to promise that we’re not going to kill them.

AX: How far ahead do you plan or know the big plot developments? Did you know at the beginning of Season 2 that Rhonda [Kaitlin Doubleday] would lose her baby and Anika [Grace Gealey] would be having a baby?

CHAIKEN: In general, we know a lot of it, because we really do arc our season out, and those points that you just mentioned, we knew in the beginning of the season. But there are also some big things that happened that we didn’t know, because as you go along, you always have to reinvent and re-evaluate where you thought you were going.

AX: And given the explosiveness of Lucious’ family, is Cookie’s family going to have any similarly earthquake revelations?

CHAIKEN: Let’s just say that Season 3 is to Cookie’s family what Season 2 was to Lucious’. We’re learning in Season 3 a lot about who Cookie is, where she comes from.

AX: What were you happiest about in Season 2, and what was the most challenging thing to do in Season 2?

CHAIKEN: It was challenging to find our way back to the essence of the show, because we got a little bit off-track in the beginning of Season 2. And the thing that was most gratifying was finding our way back, and finding those family stories, and finding those great musical moments that really feel like they’re core EMPIRE moments.

AX: And what would you most like people to know about EMPIRE Season 3?

CHAIKEN: Apart from that I’m really excited about it, and I think it’s a hard thing to say as the show runner, but I think we’re doing really interesting work in Season 3, and I’m more excited than I’ve been in a long time that Season 3 is going to be more character-driven and grounded, that at the same time that it’s EMPIRE, it’s everything that EMPIRE promises. We’re taking our time and we really are delving into these characters and telling these stories and checking ourselves and making sure that we just stay true to character from start to finish.