The backdoor pilot of Season 13 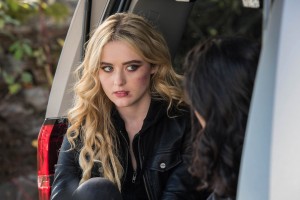 SUPERNATURAL, for all its idiosyncratic rules and lore, at its essence is Sam and Dean Winchester, as played by Jared Padalecki and Jensen Ackles. They are the backbone and basis of the show.

This makes it very hard to do a spinoff of SUPERNATURAL, but it doesn’t stop people from trying. Back in Season 9 in 2014, we got the episode “Bloodlines,” and in Season 13, Episode 10,we get “Wayward Sisters.”

Unlike “Bloodlines,” “Wayward Sisters” at least has the good sense to use characters we already know: Sheriff Jody Mills (Kim Rhodes), who’s been recurring on SUPERNATURAL since Season 5 back in 2010, along with her foster daughters, recovered vampire Alex Jones (Katherine Ramdeen), who turned up in Season 9, and fledgling Hunter Claire Novak (Kathryn Newton), who first appeared in Season 10. Also aboard are Sheriff Donna Hanscum (Briana Buckmaster), likewise originally introduced in Season 10, and relative newcomers Patience (Clark Backo) and Kaia (Yadira Guevara-Prip), who both arrived earlier this season.

They’re a likable group, and there’s nothing wrong with young women taking the lead in battling monsters (see Ripley in ALIEN, see the entirety of BUFFY THE VAMPIRE SLAYER). But this isn’t a pilot attempting to stand on its own, it’s an hour of television that is playing on the SUPERNATURAL connection. “Wayward Sisters” doesn’t have the conviction it needs to exist as a standalone series – but it’s still a decent episode.

Following an outstanding “then” (i.e., “previously on”) prologue sequence, Claire offs a nest of werewolves by herself, but comes home when Jody calls and says Sam and Dean are missing. We know that the boys got zapped into a realm of giant monsters at the end of the last episode. Jody doesn’t know this, but is rightly certain the Winchesters need help.

When Claire returns to Jody’s, the familiar dynamic kicks in – Claire accuses Jody of being overprotective, and Jody insists Claire needs protecting. Backing Jody up this time is psychic Patience, who is now living in Claire’s old room. Patience has had a vision of Claire apparently dying in Jody’s arms, but Claire dismisses this. Jody’s other ward, Alex, has taken a nursing job and disapproves of Claire for leaving.

Jody plays Sam’s message about a young woman named Kaia possibly being able to help find Sam and Dean’s absent mom. Viewers of the previous episode, “The Bad Place,” know that Kaia is a Dreamwalker, who can – unwillingly – see into the realm where Mary is being held. After being found unconscious on the roadside by a helpful civilian, Kaia is taken to the hospital where Alex works. Claire is there to confer with her foster sister and to jump in when a hissing monster attacks Kaia. The monster tosses Claire, but Jody shows up with a shotgun, which does the trick.

Back at Jody’s house, Jody assists (and Patience watches, revolted), as Alex does an autopsy on the dead monster. The creature looks a little like a skinless version of a Predator. Meanwhile, Claire and Kaia do some bonding over their mutual scars.

Kaia comes inside to explain that she’s seen  monsters like this when she Dreamwalks. The creatures travel in groups, which means more are coming. The monsters must have come through the door that Kaia helped Sam and Dean open. If monsters are coming through, the door must still be open, which means the opening can be used to find Sam and Dean, Jody reasons. Patience has a vision of monsters invading the house. Claire wants to stay and fight, but she’s outvoted. As they drive away, Claire sees real-time security cam footage showing the monsters breaking in, just as Patience foresaw.

Over in the other realm, Dean is roasting a lizard. Sam is disgusted. Dean thinks they may be stuck here. Hearing the approaching bellow of something that sounds very large, the guys run, unaware they are being stalked by a cloaked figure. The cloaked figure (who has a female silhouette) eventually gets the drop on both Winchesters, knocking them out and tying them up. Sam and Dean come to just in time to hear the cloaked figure pound on the skull of a huge animal. Dean is afraid that something has been summoned to come eat them.

Back in our world, Sheriff Donna Hanscum shows up to lend Jody a hand. When they all determine the location of the “door,” Jody tells Claire to keep an eye on the other girls while the sheriffs check it out. Kaia offers to go with Claire should the young Hunter want to follow the two older women.

In the abandoned tanker where it first appeared, the rift between worlds is still open. More monsters of the type that overran Jody’s house are here; Jody and Donna start shooting. They wind up trapped, but Claire leads the youth brigade in rescuing them.

Claire feels that, since Sam and Dean saved her life, she needs to go rescue them. She has Jody’s blessing. Jody is ready to accompany Claire through the rift, but when even more monsters show up, the sheriff stays behind and Dreamwalker Kaia goes instead.

Claire and Kaia show up in time to untie Dean and Sam before the gigantic monster shows up. You have to hand it to the SUPERNATURAL VFX folks – putting a pair of glowing malevolent eyes way up above the tree line suggests big menace without blowing the budget.

The boys wonder where Jack is. Kaia says he’s probably in “the other place.” Evidently, this bad place is not that bad place. The same figure that tied up Sam and Dean reappears, this time throwing a spear. Kaia is impaled and dies, with Claire holding her hand. Sam and Dean get the devastated Claire through the rift with them, and then the rift winks out of existence.

A yelp of real irritation here. They had to kill off the one female Native American character? There is a sincere rant about why representation matters that won’t be gone into in depth right here, but really?

Dean and Sam take their leave of Jody, telling her to thank Claire for them; Claire is too upset to talk to them at present. The guys also warn Jody that more monsters may have come through the rift, but the sheriff feels confident that she can protect her town.

Claire tells Jody that she finally understands why her foster mother has been so protective. Now that Claire has lost someone – Kaia – she cared about and felt responsible for, she gets why Jody didn’t want a repeat of the experience. (Jody already lost her own little boy, twice.) Then Claire writes in her diary, which we hear in voiceover, about how she needs her family: Jody, Alex, Patience, and Donna.

A rift opens somewhere else in the city. The hooded spear-throwing figure steps through and pulls her hood back to reveal – alternate-universe Kaia.

Okay, so the actor would still be employed. Good news: there’s still a Native American character. Bad news: well, the rift Kaia is not really Native American anymore, since she’s not native to this universe, and also she’s the Big Bad. This is maybe not exactly what representation is all about. Moot point: “Wayward Sisters” is not going to series.

Does “Wayward Sisters” feel like a CW show that had the potential to grow into something decent? Yes. Does it feel like SUPERNATURAL? Really, only when Sam and Dean are in it. The episode has the same rough framework as the parent series – family conflict, monsters, firepower – but it doesn’t feel like fans of one would naturally flow to the other.

SUPERNATURAL’s approach to fighting the forces of evil is fun, but it’s not distinctive enough to power a whole new show, and “Wayward Sisters” is built around characters who haven’t fully popped. Granted, an unearthly sheriff show centered around Jody and Donna might be awesome, but there was never any chance of that, and none of the younger characters have come into their own enough for us to fully invest in them. Felicia Day’s character Charlie might have been able to shoulder the weight, but since Charlie got killed off, that’s not an option either.

Usually, series that don’t have a character name in the title can clone themselves and survive cast changes – look at franchises as varied as STAR TREK and NCIS, which flourish in multiple forms. SUPERNATURAL is a rarity. It lives and dies with the Winchesters. “Wayward Sisters” is the attempt to diverge from this that proves the point.