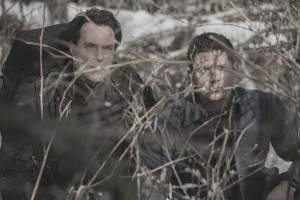 In the SUPERNATURAL Season 13 episode “Bring ‘Em Back Alive,” we’ve got storylines, storylines everywhere. This is actually a good thing, as nothing overstays its welcome and the plot moves significantly forward.

In the bunker, Sam (Jared Padalecki) and Castiel (Misha Collins) bicker about the wisdom of letting the treacherous but sometimes helpful Arthur Ketch (David Haydn-Jones) accompany Dean (Jensen Ackles) through the rift on the rescue mission to save Mom and Jack. While they wait and worry, Sam and Cas are having no luck calming down their guest, traumatized archangel Gabriel (Richard Speight Jr.).

When he’s alone in his room, Gabriel scrawls all over the walls in the angel language Enochian. Cas translates for Sam – Gabriel explains how he faked his death (remember how he could make copies of himself? There was more than one the night he “died”). With no one, including Lucifer, thinking Gabriel was alive, the archangel was finally free of obligations to God, Heaven and humankind. So he did “what anyone would do” and went to Monte Carlo to shack up with porn stars. Then, alas, he was captured by Asmodeus, tortured, had his grace drained, and we know the rest.

Dean and Ketch come through the rift in a snowy area Dean doesn’t recognize. Ketch prevents Dean from rushing in to rescue some humans being executed by angels – but the last human turns out to be alternate-universe Charlie (Felicia Day). The angels spare Charlie and take her away for interrogation because she’s seen the Nephilim (Jack) and the other-world human (Mom). Dean tells Ketch he wants to go after Charlie because of this. We (and Ketch) know better. 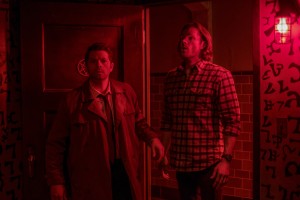 Ketch scolds Dean for his lack of stealth. Then, when Dean fails to be stealthy again, he gets shot by a bounty hunter who wants to turn him over to the angels. Ketch gets the drop on the bounty hunter, who coughs up where the angels were going. Dean knocks the guy out cold and they take his weapons, which include angel-killing bullets. Having been shot with one of those bullets, Dean shortly thereafter collapses, with Ketch trying to help him. Ketch is familiar with the poison used to coat the bullets – yeah, he’s used something like it before – and concocts an antidote. Dean at last explains who Charlie is, like a sister on our world, and Ketch seems like maybe he regrets all the sucky things he’s done in the name of a duty that’s gotten him and the world exactly nowhere. At any rate, Ketch agrees to help try to rescue Charlie.

Since the angels aren’t expecting anything, Dean, Ketch (and a helpful grenade, and lots of ammo) rescue Charlie and a bunch of other humans in the nick of time. Charlie seems to more or less comprehend Dean’s story of our parallel world, our parallel Charlie, and then sees the rift.

Ketch doesn’t want to return to our world. If Dean is going to come back to the alternate universe with reinforcements, somebody needs to stick around and do recon in the meantime. Charlie, very much like our world’s Charlie, refuses to leave also – her fight is here, her friends are here. So Dean comes back to our world alone.

In Heaven, Lucifer (Mark Pellegrino) is seated on the throne of what looks like an all-white high-tech office building. Seriously, this is what God came up with for his throne room? Maybe some tasteless angels redecorated in His absence. In any case, Lucifer is annoyed that he’s not being treated as God.

Lucifer’s girlfriend, the angel Anael (Danneel Ackles), seems pretty fed up and points out that God created, Lucifer only inhabits. The angel Duma (Erica Cerra) doesn’t want to get in the middle of this couple’s spat, but reports that so far, angels searching for Jack all over Earth can’t find him. (We know, but they don’t, this is because Jack isn’t on Earth.)

Lucifer opens for business as the new god. He can take approximately ten seconds of human prayers before he decides he’s not going to deal with this aspect of being a deity. He then zeroes in on an exorcism. At first, Lucifer has fun easily evicting the demon from its victim, and impressing the two priests no end. However, when Lucifer tries to explain who he is, the priests become so agitated that Lucifer accidentally zaps them out of mortal existence. Lucifer returns to Heaven and complains to Anael that humans and angels hate him because of God’s propaganda campaign.

Lucifer wants to find his son Jack, combine their powers and start over with an Earth full of people who worship Lucifer. Amael snaps that if Lucifer really wanted to accomplish something, he’d fulfill his promise, make more angels and restore the wings of those already present. Lucifer admits he lied about being able to do this. Amael is furious. Lucifer nearly kills her. When he doesn’t, she storms out.

In Hell, Asmodeus (Jeffrey Dean Parise) is fuming that not only have Ketch, Gabriel and Lucifer all escaped, he can’t find any of them. However, when Gabriel finally utters a few words, Asmodeus hones in on him. Asmodeus calls Sam and gives him an ultimatum: return Gabriel or Asmodeus will destroy the bunker.

Asmodeus easily overcomes the bunker’s wards, as they weren’t meant for a Prince of Hell. He has his goons grab Gabriel, who looks terrified. Asmodeus starts to kill Sam and Cas, but wouldn’t you know it, Gabriel got better a lot faster than he was letting on to anybody. Gabriel zaps the goons, heals all his scars, flexes his wings, tells Asmodeus he’s always hated the Prince of Hell’s white suit. Then Gabriel proceeds to burn Asmodeus to ash.

Sam and Cas are delighted and relieved. Sam gives Gabriel the recap (which we don’t actually hear) on the need to prevent the other universe’s archangel Michael from destroying this world. Gabriel says he is not a team joiner, and while he appreciates the rescue, this has all been the opposite of fun. When Sam pleads with him to stay, Gabriel says the last time the world was ending, he bet on Sam and Dean and was right. Then Gabriel vanishes.

Dean comes through the rift alone and explains what happened at his end. He’s happy to hear that Gabriel killed Asmodeus. He’s a lot less happy to hear that Gabriel refused to help. And when Dean hears that there is no archangel grace left to open the rift, he has a furniture-tossing meltdown. Sam and Cas assure him that they’ll find Gabriel, get more grace and reopen the rift. Dean’s response: “We’d better.”

First, let us offer thanks to Chuck for the film editing process, so that most of the characters bringing each other up to speed happens off-screen. Otherwise, the explanations of things we already know could conceivably take up the rest of the season.

As for explanations of things we didn’t already know, how Gabriel survived makes as much sense as anything else in the show. Speight and his trickster character both provide welcome levity and snark. It’s also nice to see Gabriel be true to form and not want to play hero. Sam’s speech is sweet and heartfelt, but somehow we know as he’s making it that Gabriel won’t cooperate, if only because that would make some of the plot too easy.

As for Charlie, welcome back character and performer. This new Charlie seems close to the old, and Dean being unabashedly sentimental about this is agreeable.

The redemption of Ketch is another matter. He’s been a relentlessly evil villain. While a logical case is made for why he might be ready for a change of heart now (he didn’t have many choices before if he wanted to survive), his sadism and rapacious qualities seem less a product of circumstance and more innate characteristics.

Lastly, while Pellegrino is great as always, let’s hope Lucifer’s lapse in motivation doesn’t mean the writers can’t figure out what to do with him anymore.

Mostly, though, “Bring ‘Em Back Alive” is SUPERNATURAL in fine form, with action, quips, and big surprises at every turn.