The actor talks his second directorial outing on the series 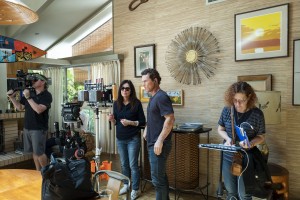 TNT’S crime drama ANIMAL KINGDOM is now in its fourth season on Tuesday nights, and has been renewed for a fifth. Based on the 2010 Australian feature film of the same name (it earned Jacki Weaver a Supporting Actress Oscar nomination), the TV version of ANIMAL KINGDOM is set in Oceanside, California. The Cody family, headed by matriarch Janice, nicknamed Smurf (Ellen Barkin), is engaged in a number of criminal enterprises. Since Janice’s sons all have issues, their work, to say nothing of their relationships, can be hazardous.

Shawn Hatosy (pronounced HAT-oh-see) plays Smurf’s eldest son, Andrew “Pope” Cody. Pope is violent, protective of his kin, but sensitive to any hint of betrayal. Hatosy, originally from Maryland, has played other criminals over his career (including a killer in a season-long arc on BOSCH), as well as cops, both relatively upstanding (he spent five seasons on SOUTHLAND as LAPD detective Sammy Bryant) and bent (in RECKLESS). Hatosy began his professional acting career at age twenty in an episode of HOMICIDE: LIFE ON THE STREET. Major roles in more television and in feature films, including THE FACULTY, THE COOLER and ALPHA DOG, followed. Hatosy has also starred in the series FLAKED and had an arc on FEAR THE WALKING DEAD.

ASSIGNMENT X: Can you talk about Pope’s trajectory over all of the seasons of ANIMAL KINGDOM so far?

SHAWN HATOSY: Well, he’s the oldest of Smurf’s boys, and when we first meet him in Season 1, he’s just come out of jail. He’s done three years for a crime that the family committed, but he basically kept his mouth shut, so that they would all stay out of jail. And then when he gets back, he comes to learn that they’re trying to push him out. He’s the most unstable of the group. He does the dirty work – they rely on him when bad things need to be done, so he carries that as his burden. He’s very complicated and complex.

AX: Had you seen the original ANIMAL KINGDOM feature film?

HATOSY: Yes. [It was written and directed by] David Michod, who is an executive producer on our show. It did really well at Sundance. My character is the same as Ben Mendelsohn’s character, Pope.

AX: What would you say are the big differences between the ANIMAL KINGDOM film version of Pope and the TV series version of the character?

HATOSY: The film a very dark film, and it’s a complex character piece that deals with the inner workings of that kind of family. And for a TV show, while Pope is very dark and disturbing, I think if you did forty-nine episodes of that, people might get sick of him. So we had to find a way to make him as real as possible, show that he has other levels, and I think that’s our biggest difference from the movie.

AX: Did you have to learn how to do anything in order to play Pope at the beginning, like how to handle certain types of guns, or things like that?

HATOSY: Well, he’s always got some kind of tool in his hand [laughs], because we’re constantly breaking into buildings, or knocking walls down, so I’ve got a saw here, and a drill there, so yeah, for sure. An acetylene torch is something I had to figure out how to use. All kinds of stuff like that. 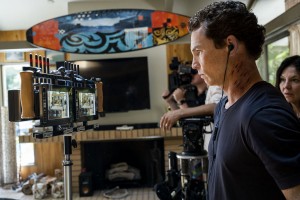 AX: Are you happy that the TV ANIMAL KINGDOM shoots Los Angeles for Southern California?

HATOSY: We shoot L.A. for Oceanside, which is south [of L.A.], but yes, I’m very, very happy. I have three kids, so being home in L.A. is definitely a perk.

HATOSY: I find Pope to be one of the most rewarding characters that I’ve played, just because he does have so many levels. Particularly when you’re doing episodic TV, you can end up doing the same thing over and over again. And with Pope, each hour, you get a different color [laughs]. Sometimes he’s manic, sometimes he’s OCD, sometimes he’s in love. He’s just got no ceiling. So for me, the biggest success for this show is, I’ve directed two episodes. So I’m really enjoying doing that, and I hope to continue.

AX: When you’re directing, do you like working with yourself as a director, because then you know exactly what the director wants from you, “All right, I’m going to do this, I don’t have to worry about it,” or do you want that other eye?

HATOSY: Well, thankfully, our d.p., Loren S. Yaconelli, is somebody that’s been with the show since the beginning. So when I’m on camera, she’s definitely the eye for me. But having said that, with episodic TV, particularly for the series regulars, we’re walking around with these characters so much, we usually do two takes and move on. So my character is the least of my concerns when I’m directing.

AX: What can you say about “Julia,” the ANIMAL KINGDOM episode that you’ve directed this season?

HATOSY: One thing that’s very nice about our show this season is that we delve back into a flashback of 1977, we see the origin story of Smurf, so we get a lot of answers as the past catches up with the present.

AX: Did you have to do a lot of research for the 1977 sequences?

HATOSY: Yes. Interestingly enough, we were designing a house to look like 1977, and because getting the rights for photographs is such a gigantic pain in the neck, we were able to use my childhood photographs for the walls, because my mom could sign off on them, and we could tell the story. So it worked out pretty nice.

AX: Do you want to direct on other shows?

AX: And what would you most like people to know about ANIMAL KINGDOM right now?

HATOSY: I would like people to know that we are [on Tuesday nights], and my episode that I directed is Episode 4:11.