The plot goes forward, nobody sulks, and a great character returns 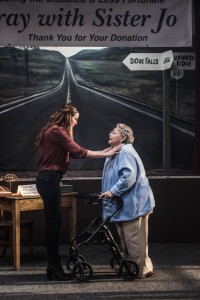 Castiel (Misha Collins) and Lucifer (Mark Pellegrino) have successfully escaped from Hell together and almost immediately unsuccessfully tried to kill each other (raise your hand if you saw that one coming). Castiel makes his way back to Sam (Jared Padalecki) and Dean (Jensen Ackles) and brings them up to date. The brothers are astonished to hear that they haven’t really been talking to Cass over the past few weeks – it’s been the Prince of Hell Asmodeus (Jeffrey Vincent Parise) imitating the angel. Castiel also says that Mary Winchester, aka Dean and Sam’s mom, is still alive in the alternate universe, and warns of the dangers of that universe’s ruthless archangel Michael.

Sam and Dean bring in current prophet of the Lord Donatello Redfield (Keith Szarabajka) in the hopes that he can decipher a demon tablet that may open a portal to the alternate universe. Donatello requests chicken wings – it’s hard to translate all those ancient glyphs on an empty stomach.

Lucifer, meanwhile, is trying to find enough angelic grace to restore his full powers. The problem is, there aren’t that many angels out there to mug, though he does drain a luckless Cupid. Then Lucifer hears from a homeless man about faith healer Sister Jo (Danneel Ackles, Jensen Ackles’s real-life wife), who performs miracles for a price.

Asmodeus, in league with former British Man of Letters Arthur Ketch (David Haydn-Jones), sends the hard-to-kill human to take out Lucifer before that fallen angel can regain his full strength.

Lucifer recognizes Sister Jo as the angel Anael; she recognizes him, too, but unlike most angels, doesn’t seem alarmed. Anael has become quite the businesswoman in her time on Earth, healing humans for cash. She proposes that rather than draining and killing Anael for her angelic grace, Lucifer just takes a bit at a time, allowing her to replenish. This way, he’s always got angelic grace on tap and doesn’t have to run around finding more angels to kill, and she’s not dead. Lucifer, who approves of Anael’s mercenary streak, thinks this is a fine plan.

Sam, Dean and Castiel track Lucifer to Sister Jo’s church just in time to find Ketch. Nobody is happy to see anybody else, nor are they pleased that Lucifer is out of reach. The guys wind up knocking out Ketch and tracking Lucifer and Anael to a motel. 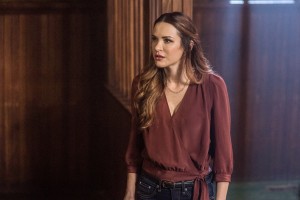 The Winchesters and Castiel lure Anael out of the hotel room. Anael says that she needs their help, Lucifer is planning to drain all her grace, but he’s still weak. The guys all buy this. Oops. When they get into the motel room, Lucifer is there – and pretty freaking powerful. He almost succeeds in killing Dean, Sam and Castiel simultaneously, before Ketch comes in and flings an anti-demon bomb into the room. Lucifer and Anael disappear, but everybody else stops dying. Ketch proposes teaming up again. He even admits that he’s working with Asmodeus to prove how honest he is. Ketch knows the others think he’s a monster – “Because you are,” Dean agrees – but even he draws the line at having Lucifer walk the Earth. They all need each other to take down Lucifer. Nobody likes or trusts Ketch, but he did save their lives, again, so they’re willing to give it a shot.

Asmodeus, who we know to be a shape-shifter, appears as Castiel to Donatello. Asmodeus may be preparing to kill Donatello to prevent him from translating the demon tablet, until Donatello mentions in passing that he wants to help save Jack from the other dimension. Since Asmodeus still hopes to control Jack, he just gives Donatello a subconscious order to report any progress, then vanishes.

Donatello is starting to crack under the pressure of translating the tablets, even though he is being kept supplied with fried chicken. Dean still wants to kill Ketch once they’re done with Lucifer.

Lucifer and Anael, meanwhile, have gotten together a small group of angels. Lucifer promises that he can make more angels (an ability previously thought to belong only to God) and to give these angels their wings back. All they have to do is acknowledge Lucifer as Lord of Heaven. We see that the angels are willing to accept this condition.

Back in Hell, Ketch reports back to Asmodeus. Lucifer is a lot stronger than was advertised. Asmodeus shows Ketch an artifact – a blade that can kill archangels. Ketch doesn’t know what good this will do, as only another archangel can wield it. Asmodeus takes Ketch to a cell, revealing, in horrible shape but still alive, the archangel Gabriel (Richard Speight Jr.).

For those who have been watching SUPERNATURAL long enough to know who Gabriel is, this is a cause for celebration. Gabriel, also Loki, also the Trickster, was a great character way back when, and Speight is delightful in the role. How exactly he’s still alive after getting killed by Lucifer way back in Season 5? We don’t know, but maybe info will be forthcoming.

Meanwhile, “Devil’s Bargain” is chock-full of good stuff. We get Pellegrino showing a range of feeling as Lucifer. Danneel Ackles is an ace rogue angel. Szarabajka is amusing as the fuddled Prophet. There’s even a fun visual zinger with Asmodeus, previously described as “evil Colonel Sanders,” trying and tossing away a piece of Redfield’s fried chicken. Bonus: there’s major forward plot movement and nobody sulks.