Sam and Dean on a mostly not-supernatural caper 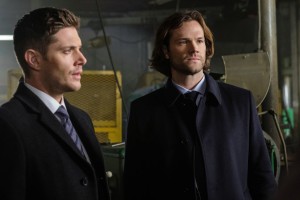 We get it. There are only so many things that can go bump on any particular night – Thursdays, for instance. So in the SUPERNATURAL episode “A Most Holy Man,” Sam Winchester (Jared Padalecki), along with brother Dean Winchester (Jensen Ackles), spends more time making like Sam Spade than a monster hunter.

“A Most Holy Man” is SUPERNATURAL’s nod and wink to the classic film noir THE MALTESE FALCON. The episode isn’t shy about this: the maguffin that everybody’s after is actually from Malta, and a number of characters are named after actors who were in the 1941 movie starring Humphrey Bogart and directed by John Huston, based on Dashiell Hammett’s novel. (There was an earlier but less famous film adaptation made in 1931, but we digress. But so does this episode.)

There are actually several maguffins here. One is the skull of Saint Peter, stolen from a nunnery in Malta at the episode’s start. The other is the blood of “a most holy man.” Sam and Dean are still trying to get hold of the last four ingredients for the spell that should open the doorway to where their mom and Jack are trapped. With no idea of how to get the Seal of Solomon, no current location on Lucifer to get the grace of an archangel (fallen archangel still counts), and Castiel running around Syria to try to get the fruit of the Tree of Knowledge, the boys settle on acquiring the blood.

Dean and Sam decide to interpret this as meaning the blood of a Catholic saint. How they come to this conclusion, after all their adventures with God and angels, is a good question that goes unanswered. However, when the Winchesters try to buy saint’s blood from holy relics broker Margaret Astor (Leanne Lapp), she flirts wildly with Sam. Then Astor sends them to another dealer, Richard Greenstreet (Dominic Burgess). Greenstreet has saint’s blood, which he offers to exchange for the skull, which he says has been stolen on behalf of mob boss Santino Scarpatti (Al Sapienza).

When Dean and Sam make it to the hotel room of the thief, someone has clearly gotten there before them, since the thief is dead and the skull is gone. Scarpatti’s men pick the boys up. Scarpatti tells them that if they can recover the skull for him, he’ll give them enough money to buy the blood from Greenstreet. 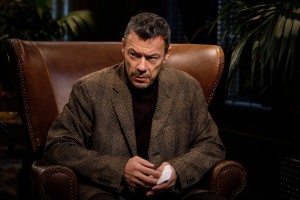 On a second visit to the dead thief’s hotel room for clues, Sam sees a piece of paper with a string of code on it. He is then knocked out by a man who turns out to be Father Lucca Camilleri (Massi Furlan). When Dean gets the drop of Camilleri, the priest explains he’s from the nunnery, hoping to buy back the stolen skull. It is precious to the congregation. Sam believes him. When Dean doesn’t quite get it, Sam asks Dean what he’d do if someone stole Baby the Impala. Dean goes into a reverie of the kind of murder – and then torture, and then more murder – he’d inflict on anyone who would dare do such a thing; it’s unclear if Sam ever makes his point. Still, they resolve to help the priest recover the skull.

By now, the Winchesters have a Scarpatti mob problem. Prior to this, we wonder why they didn’t simply revise their notion of what “a most holy man” might mean. They’ve got a Prophet of the Lord in a coma in a hospital – wouldn’t he count? Now, even if they figure out another solution to their blood shortage, they still have to deal with Scarpatti’s wrath.

Then Father Camilleri has an epiphany and remembers the numbers on the scrap of paper Sam saw. This is so convenient that we become suspicious of Camilleri, but no, he’s just got a really good memory. Since neither our suspicions nor Camilleri’s mnemonic capabilities lead us anywhere, it seems they could have just as easily saved the scrap of paper and gotten the code off of that. Ah, well.

The code turns out to be a tracking number for a shipped package. Our guys show up just in time to see corrupt cop Cromarty (Fulvio Cecere) collect the package. They track him to a warehouse. The package is the skull. Astor had the skull stolen from the original thief so that she could stage an auction between Greenstreet and Scarpatti.

In the car, Camilleri explains that he doesn’t want to steal the skull back – he wants to buy it back with a suitcase full of donations from the congregation. While Sam goes into the warehouse with the money, Dean and Camilleri take time to have a conversation about the nature of faith. Camilleri has faith. Dean more than believes in God, he knows God exists, but he doesn’t have faith. He tells Camilleri that God doesn’t care about either one of them.

Okay, seriously, stop. If God didn’t care about Dean (and Sam), they’d both be dead a few zillion times over. Yeah, Dean feels annoyed and abandoned. So does Lucifer. Both of you, snap out of it.

Meanwhile, back in the warehouse, Sam offers the donations. He is not the highest bidder. Cromarty, irritated with Astor’s high-handed treatment of him, shoots his boss. Then there’s a shootout between Scarpatti’s gangsters and Greenstreet and the Winchesters. Camilleri is wounded in the crossfire. Scarpatti and his men are wiped out, Greenstreet is arrested for the carnage and Sam and Dean slip away with the injured Camilleri and the skull.

It turns out that Camilleri has done so many good works that he even got an audience with the Pope, who called him “a most holy man.” On hearing this, the boys not surprisingly ask for a little bit of Camilleri’s blood. He’s happy to help them and heads back to Malta with the skull.

It’s completely possible that, during the warehouse scene, somebody explained why various characters found it useful to send Sam and Dean on a wild goose chase. However, it’s hard to remember exactly what gets said (it’s not very memorable) or figure out the reasoning behind it. By the time the skull shows up in the warehouse, it doesn’t really seem like any of the guest characters needed the Winchesters for anything.

The script by Andrew Dabb & Robert Singer has some nice in-jokes, and both Padalecki and Ackles look like they’re having a good time participating in the big shootout sequence. But with no supernatural elements and no powerful character moments, “A Most Holy Man” comes off as a lightweight standalone.