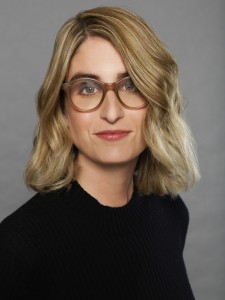 CBS’s new miniseries THE RED LINE has its two-hour premiere on Sunday, April 28. Based on the play A TWIST OF WATER, written by Caitlin Parrish and directed by her frequent collaborator Erica Weiss, THE RED LINE explores three Chicago families in the wake of a tragedy. Noah Wyle plays Daniel Calder, a white high-school teacher whose life is upended when his husband, black doctor Harrison Brennan (Corey Reynolds), is mistakenly shot to death by white police officer Paul Evans (Noel Fisher). In the wake of her father’s death, Daniel and Harrison’s adolescent daughter Jira (Aliyah Royale) is determined to find her birth mother. Unbeknownst to Daniel and Jira, Jira’s birth mother Tia Young (Emayatzy Corinealdi) is aware of what’s happened, but since she’s running for office, she doesn’t want to reach out. Paul is guilt-stricken, but hesitant to do anything to disrupt the system that protects him.

Parrish and Weiss adapted THE RED LINE together for CBS. Parrish’s previous television credits include writing for SUPERGIRL (on which she served as executive story editor for a time), UNDER THE DOME, and EMILY OWENS, M.D. Parrish also wrote the feature THE VIEW FROM TALL, which she and Weiss directed together.

ASSIGNMENT X: THE RED LINE started as a stage play, so what elements did you add to make it an eight-hour series?

CAITLIN PARRISH: Well, we opened up the play a great deal. The play originally only consisted of four characters – the father, the daughter, a new romantic interest for the father, and then the birth mother, who shows up in the very last scene of the play. So in opening up the world, in moving beyond that main family of Daniel and Jira, we really dug into who these two other families would be, Tia’s family and Paul’s family. And that just opened it up to the entire city, as opposed to a very focused, very narrow story of Daniel and Jira.

AX: Were there characters who changed either because of the way the narrative moved once it was opened up, or due to what the actors brought to it?

PARRISH: I would say all of the characters changed, due to both the wonderful team we assembled in the writers’ room, and circumstances in the news, and then the incredible cast we assembled. Erica and I have always been incredibly open to the influence of a cast. We’re writers. We’ve never really been auteurs. We would love for the project to be the best it can be, rather than every single idea come from us. So we were very privileged to experience a lot of evolution in the characters, because of the writers and cast that we had.

AX: Can you talk about any specifics with that?

PARRISH: Yes. I can say that Liam, played by Vinny Chhibber, in the play was more of the comic relief. Liam is Jira’s teacher, and friends with Daniel, and perhaps more than friends with Daniel. And with Vinny Chhibber, who’s an incredibly thoughtful performer, Liam really became a moral compass for the show in a way he hadn’t been in the play, and that was really fun, and really profound to watch. 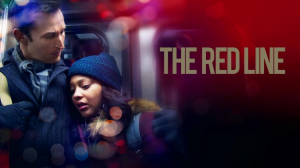 AX: With the casting of Noah Wyle, had you seen FALLING SKIES?

PARRISH: I had, yes, and THE LIBRARIANS.

PARRISH: No. I’d always been a fan of his work. I’d always thought he was an incredibly nuanced performer. And then when I actually met him and discovered what a serious intellect he was, that was what fully sold me on working with Noah, and knowing that he would be a wonderful collaborator, and just the right person to bring this character to life.

AX: A lot of your cast is from Chicago, but Howard Charles, who plays Tia’s husband Ethan, is actually British …

PARRISH: Yes, although he does one of the best Chicago accents I’ve ever heard.

AX: How do you and Erica Weiss work together?

PARRISH: Well, originally, when we started in the theatre, she was the director, and I was the playwright. But as time has gone on, our Venn diagram has become more of a circle. We write and direct things together. So we broke all the stories together in the writers’ room, we made production decisions together. So I would describe us best as a two-headed beast.

AX: Did either of you direct any episodes?

PARRISH: No, not this year. If we should be so lucky as to get a second season, that would be something we’d love to discuss. We do direct, but this year, we were very privileged to have an incredibly inclusive and talented lineup of directors helming the eight episodes.

AX: Did you and Erica Weiss, as people who are neither gay men nor African-American, have concerns about tackling aspects of this subject matter?

PARRISH: Me and Erica? Yeah, we had a lot of concerns, which is why we so grateful to have executive producers like Greg Berlanti and Ava DuVernay, and then why we were so adamant about assembling a writers’ room with people who had incredibly different life experiences and backgrounds from us. We were the only white women in the room, and we made it a point from Day One to listen as best we could, and be more concerned about getting it right than being right.

AX: Can you talk about any specifics of THE RED LINE that were changed as a result of those discussions?

PARRISH: Again, we were very privileged to have a writer who is Muslim, and we learned a great deal about how Liam would approach a relationship with a person who is grieving, and about the nature of Western and Eastern grief. And I had to [examine] a lot of my assumptions, and was very grateful for the opportunity to do so.

AX: How did you wind up with Greg Berlanti and his producing partner Sarah Schechter as executive producers? Had they seen the play?

AX: Are there any SUPERGIRL people on THE RED LINE?

PARRISH: Sadly, no. Although I adore the SUPERGIRL cast. They’re so talented. No, they’re obviously very busy, and we were assembling our cast in the middle of pilot season, when the SUPERGIRL cast was very busy. And then we’ve cast out of Chicago for the series.

AX: Did you go to Chicago while THE RED LINE was in production there?

PARRISH: Erica was the on-set show runner. I stayed in Los Angeles heading up the writers’ room, for the most part. But I was present for the pilot and the finale. But yeah, every single second of the show was shot in Chicago, thank God, which is where Erica and I make all of our theatre, and where we’ve made independent films, and was the only place we wanted to film this show.

AX: THE RED LINE tries to be understanding of all viewpoints. What do you think Daniel and Jira would think of the show if they saw it? Because Jira has a very telling line, early on. When Daniel says he wish he’d been the one shot instead of Harrison, she says, “This would never happen to you.” And yes, Paul the police officer is of course a human being, but ultimately, he did something to Harrison that he wouldn’t likely do to a white man in the same situation …

[We are joined by Erica Weiss.]

AX: Are you working on any other projects we should know about?

PARRISH: We’re working on a lot of different projects at the moment. Erica’s directing at the Goodman Theatre. She’s directing the world premiere of TWILIGHT BOWL by Rebecca Gilman. We’re currently working on adapting another play of ours, THE DOWNPOUR, into a feature film script. We’re constantly working on new pilots and new plays, and we’re also hopeful that we get the opportunity to tell more stories on THE RED LINE.

AX: And what would you most like people to know about THE RED LINE?

PARRISH: That it’s a story about hope, and I think that if you tune in, you will feel seen.

ERICA WEISS: Everything she said [laughs].