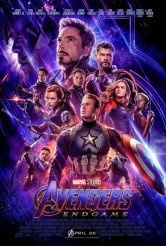 AVENGERS: ENDGAME raises several profound questions. These questions touch only tangentially on anything to do with life, death, love, friendship, sacrifice, purpose, power, and time, although all of these issues are raised and explored during the film’s three-hour running time. No, the first of these questions is, how can this movie can possibly be discussed coherently without spoilers? The second question is, what exactly constitutes a spoiler?

These things usually come in threes, but in this case, even a third relevant question might be a spoiler. We will, for the sake of getting on with this, declare that if something is in the poster for AVENGERS: ENDGAME, reasonable people can assume that whatever it is also factors into the film. We can also assume that anybody reading this review has seen last year’s AVENGERS: INFINITY WAR.

By the end of AVENGERS: INFINITY WAR, Thanos (Josh Brolin) had, despite the best efforts of the Avengers, collected all six Infinity Stones. This allowed Thanos to reshape the universe to his liking: since he felt it was too overpopulated, he caused half of all living beings to disintegrate into dust with a snap of his fingers.

At the beginning of AVENGERS: ENDGAME, the traumatized survivors of this debacle are wholly demoralized. These include Avengers Tony Stark aka Iron Man (Robert Downey Jr.), Steve Rogers aka Captain America (Chris Evans), Asgardian alien Thor (Chris Hemsworth), Natasha Romanoff aka Black Widow (Scarlett Johansson), and Bruce Banner aka the Hulk (Mark Ruffalo), along with Clint Burton aka Hawkeye (Jeremy Renner), and Scott Lang aka Ant-Man (Paul Rudd). These last two were absent from INFINITY WAR, but they’re both featured in the poster, and anyone who stuck around through the end credits of ANT-MAN AND THE WASP knows that Scott was left in a precarious situation by Thanos’s xenocide. Anyone who stayed through the end credits of CAPTAIN MARVEL knows that film’s title character aka Carol Danvers (Brie Larson) becomes involved with the Avengers as well. 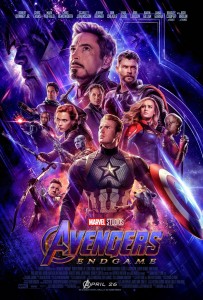 Wisely, AVENGERS: ENDGAME allows everyone their grief, but paces things so that the story can move forward at a good clip. It’s divided into a roughly three-act structure, with a considerate amount of epilogue. This is the culmination of a twenty-two movie story. As such, there’s a lot to pay off, but directors Anthony Russo & Joe Russo and screenwriters Christopher Markus & Stephen McFeely (all of whom were also in these capacities on AVENGERS: INFINITY WAR, plus CAPTAIN AMERICA: THE WINTER SOLDIER and CAPTAIN AMERICA: CIVIL WAR) manage to service everything deftly, respectfully and often even humorously. Even when we’re tracking several separate groups of characters, there isn’t that “meanwhile, back at the ranch” feeling that sometimes occurred during INFINITY WAR (your mileage may vary on that one). There are a number of guest appearances and cameos, some so fleeting that those who are not watchful may miss them entirely. Again, this pays homage into everything that went into this culmination.

There are moments in AVENGERS: ENDGAME that delightfully fulfill hints in earlier films, and some marvelous character combinations we never saw coming (interpret “combinations” however you like). There is also an explanation for a plot mechanism that works better than most other explanations for this type of thing that is doubtless going to show up later in other parts of the Marvel-verse.

The obvious CGI elements (spacecraft, flying suits, etc.) are handled with expected finesse. However, where this technique really shines is work meant to look absolutely ordinary on characters. There’s a bare shoulder early on that’s especially impressive, and facial work is remarkable.

AVENGERS: ENDGAME succeeds in delivering both the epic scope such a finale demands, and the personal touches that have made the whole franchise so winning. So endeth the avoidance of spoilers. Feel free to discuss life, death, and so on amongst yourselves.