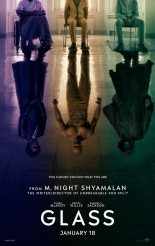 With great potential comes the possibility of great disappointment

GLASS is the third in writer/director M. Night Shyamalan’s trilogy about men with unusual abilities. This began with 2000’s UNBREAKABLE, which starred Bruce Willis as David Dunn, a seemingly ordinary security guard who discovers that he’s nearly indestructible after surviving a train crash. In the course of figuring out who he is and what he should do, David befriends Elijah Price (Samuel L. Jackson). Elijah has a brilliant mind, though his bones are so fragile he’s in a wheelchair. Then David discovers that Elijah, obsessed with comic books, has engineered a series of mass disasters so that David can become a superhero. Elijah is elated to be the supervillain Mr. Glass, and ends UNBREAKABLE in a psychiatric hospital.

UNBREAKABLE was a solid movie. It had memorable images, good plot twists, and a nice sense of scale in dealing with myth-making. Shyamalan left that universe behind for a number of years to create other works of varying quality, but returned to the subject matter in 2016’s SPLIT. SPLIT stars James McAvoy as a schizophrenic with twenty-four different personalities. One of these is the Beast, who kidnaps, kills and partially eats adolescent girls, though he allows one, Casey Cooke (Anya Taylor-Joy), to go free after he learns she has been abused. Since this review is not (primarily) about SPLIT, suffice to say that it’s not as good as UNBREAKABLE. In the closing moments of SPLIT, we see David Dunn and realize that UNBREAKABLE and SPLIT are part of the same continuum. 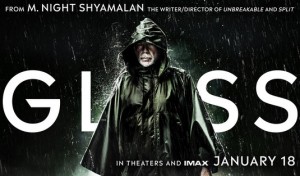 Besides being the name of the film, GLASS also refers to Elijah, still hospitalized. Since he’s the title character, we might expect him to show up a little sooner than he does in the proceedings. It’s not too spoilerish to note that he’s still in a mental hospital. GLASS is set three weeks after the end of SPLIT. David Dunn and his now-grown son Joseph (Spencer Treat Clark) run a security supplies store, but David’s real job is patrolling his Philadelphia neighborhood as a full-fledged vigilante. He uses his abilities (besides resilience, he also has super-strength and intuition about people’s intentions) to fight muggers and robbers. However, now that he knows of the Horde, as the Beast and those personalities who side with him call themselves, David feels he needs to stop the unknown killer, who has just kidnapped four more young women.

At this point, we’re still early on in GLASS. It’s a promising set-up, and for about the first two-thirds of the movie, it works well enough. We meet Dr. Ellie Staple (Sarah Paulson), a psychiatrist who specializes in persuading people who think they have superpowers that they really don’t. When she starts talking about comic books, Shyamalan gets so meta about what he’s doing with GLASS that he almost breaks the fourth wall. Still, there’s enough interesting material to keep us engaged. By the midway point, we’re wondering what’s with all the negative buzz that we’ve heard – GLASS seems unlikely to knock our socks off, but it’s doing some intriguing things with character and conflict.

Then come a couple of plot twists that are so misguided and tone-deaf as to be stunning. They will not be revealed here, but they not only lead to a conclusion that’s as unsatisfying as possible, they betray a lack of awareness of what’s going on with both comic books and comic book-inspired media. This might be marginally less objectionable if GLASS didn’t discuss comic book tropes in multiple scenes. As it is, GLASS winds up sacrificing many great possibilities for the sake of reinventing the wheel, without any seeming awareness that other wheels already exist.

All this said, the cast is good. Willis is commendably restrained and serious as David, McAvoy is game and versatile as the ever-changing host of the Beast et al, and Jackson has wit and authority as the wily Elijah/Glass. Shyamalan does create some decent suspense, and the styles of both Dunn and Glass remain striking.

GLASS qualifies as an actual disappointment. Dunn and Glass seemed worth revisiting after UNBREAKABLE, and even the addition of the schizophrenic protagonist of SPLIT had potential. This film clearly represents what Shyamalan wants to say, but even viewers who agree with him in general may not feel this is the best way to frame the message.