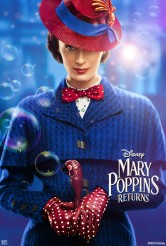 A mixture of old-fashioned and new sensibilities 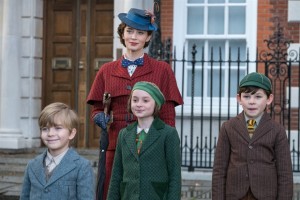 While MARY POPPINS creator P.L. Travers still probably wouldn’t be happy with the new MARY POPPINS RETURNS, the title character, as played by Emily Blunt, feels closer in spirit to Travers’s work than Julie Andrews’s interpretation in the 1964 film. This Mary Poppins is still magical and extremely helpful, but she can also be stern, vain, and snappish, if not as downright scary as she sometimes was in the books.

MARY POPPINS RETURNS is in fact a sequel to the 1964 MARY POPPINS film. This is set about twenty years later, during the 1930s, when England was in the midst of “the Great Slump” (aka the Depression). Siblings Michael (Ben Whishaw) and Jane Banks (Emily Mortimer) are now grown-ups who remember having Mary Poppins as a nanny, but they’ve both convinced themselves that they fantasized much of what she did. Michael is a recent widower with three young children (Pixie Davies, Joel Dawson, Nathanael Saleh) who has taken a job at the same bank that holds the deed to the Banks family home. Jane is a political activist who is working on behalf of the homeless. Since the bank is threatening to foreclose on the house, Michael and his children may find themselves among those Jane is helping. Then Mary Poppins descends from the sky on a kite, insists on becoming the nanny to Michael’s children (she talks around his horror at not being able to afford her), and takes them on adventures as she nudges everyone in the right direction.

The MARY POPPINS books were about the secrets of childhood, wondrous people and places that everyday adults could not be told about. The first MARY POPPINS film, as many family films are, largely about parents (especially fathers) learning how to reconnect with their children. That particular medicine required a large spoonful of sugar. MARY POPPINS RETURNS is somewhere in the middle. Michael actually connects pretty well with his children, except when he’s panicking over finances. He mostly needs to process the death of his wife and accept that he’s capable of parenting on his own (with some help from others). There’s also more of a high-stakes plot here, with Mary pointing the Bankses in the right direction. If these aren’t true to Travers, they at least give the film a shape, as well as some baked-in social commentary.

However, with elements like the Royal Doulton Bowl, Willoughby the dog and some scary characters at the edges of the fantasy, MARY POPPINS RETURNS incorporates more of Travers’s specific brand of whimsy. It also displays kinship with the older MARY POPPINS in its use of traditional 2D animation when Mary and the children pop in to fantasy worlds. There’s something sweet and reassuring about seeing this technique brought back.

As it’s no secret that Dick Van Dyke is in the film, it can be said that he’s in a different role, and is a blast when he arrives. Lin-Manuel Miranda is playing a new character, albeit his lamplighter Jack largely fills the same plot function as Van Dyke’s chimney sweep Bert. Jack is the bridge between Mary’s magic and the real world. Not wanting to waste Miranda’s musical abilities, and desiring to show off Blunt’s, MARY POPPINS RETURNS gives the performers a full-on English music hall number, complete with bawdy double entendres. Blunt and Miranda dive into it with joy, and it’s nothing little ones will understand enough to cause trouble. This is very much Mary Poppins having fun on her own terms; whether this is delightful or heresy will be up to the individual viewer.

Whishaw, a strong dramatic actor (as well as voicing the title bear in the PADDINGTON films), invests Michael with a lot of soul, and Mortimer is the epitome of kindness and warmth as Jane. Julie Walters and Colin Firth provide able support. Davies, Dawson and Saleh are all fine and energetic as the kids. There are some enjoyable cameos, although one with an eccentric relative of Mary’s goes on a bit too long.